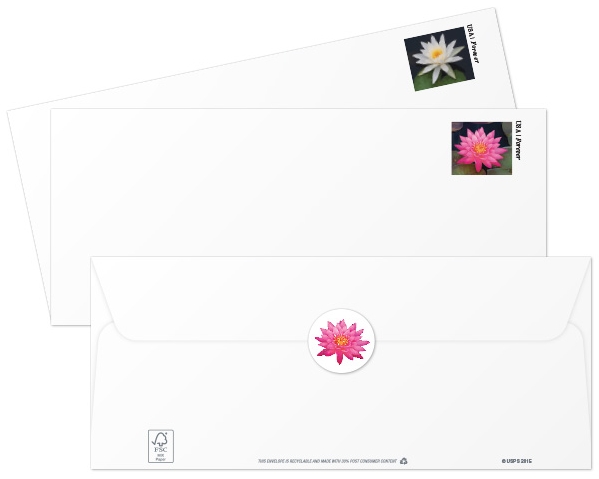 A previously unannounced pair of Water Lilies forever stamped envelopes will be issued April 17 and sold in packages of 10 with matching adhesive seals.

On April 17 the United States Postal Service will issue two varieties of Water Lilies forever stamped envelopes in a package of 10.

A set of four Water Lilies forever stamps was issued March 20; two of those stamp designs are being reused to create the two different imprinted stamps on the new envelopes.

The imprinted stamps on the new envelopes, and on the previously issued stamps, use photographs by Cindy Dyer, a graphic designer and photographer whose work has appeared in magazines and newsletters, books, brochures, and convention and trade show materials.

The package of 10 envelopes with two designs (five of each) includes coordinating pink lily envelope seals. It will sell for $9.95 per set as USPS item 882101.

The envelopes are being issued at the American Stamp Dealers Association’s Spring Postage Stamp Show, which is taking place April 16-18 at the New York Hilton Midtown, 1335 Avenue of the Americas, in New York City.

According to USPS spokesman Mark Saunders, the show will host the Friday first-day ceremony in association with a Postal Service team in New York.