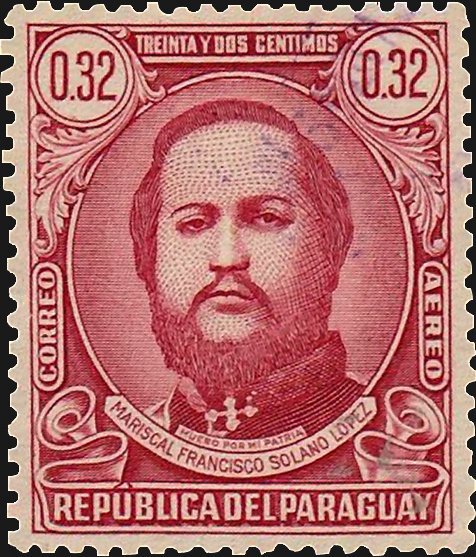 The airmail Solano Lopez stamps differ slightly from the regular issues, in the placement of the denomination numerals.

By the mid-1940s, Paraguay was printing a lot of stamps. Many of them were very attractive, engraved by renowned British printers such as Thomas de la Rue.

Solano Lopez is widely regarded as being responsible for the disastrous War of the Triple Alliance (in which he was killed), which pitted Paraguay against the combined might of Argentina, Brazil and Uruguay.

The designs of the regular and airmail stamps differ in some details. Most obviously, the denominations are placed in each of the bottom corners on the regular stamps, and in the upper corners in a white field on the airmails.

Except for the lowest denominations, the stamps are not as easy to find as you might suppose.

The 1c, 2c and 5c stamps are readily available in mint condition. They must have been packet material. Anything above the 5c stamp is much scarcer, mint or used.

A recent review of three popular online auction sites revealed no full sets on offer, and none at all of the 10g airmail stamps. A major retail stamp website came up empty for either single stamps or complete sets, surely a measure of limited demand.

There is little call for the Solano Lopez issues, so they should not be that expensive — if you can find them at all.

Similarly, these stamps  are not common on cover. They were used from 1947 to 1950, usually in conjunction with other stamps. Any denomination above 32c on cover is unusual, and solo usages are quite scarce.

Mark this down as another set of low-value common stamps that is actually difficult to find.