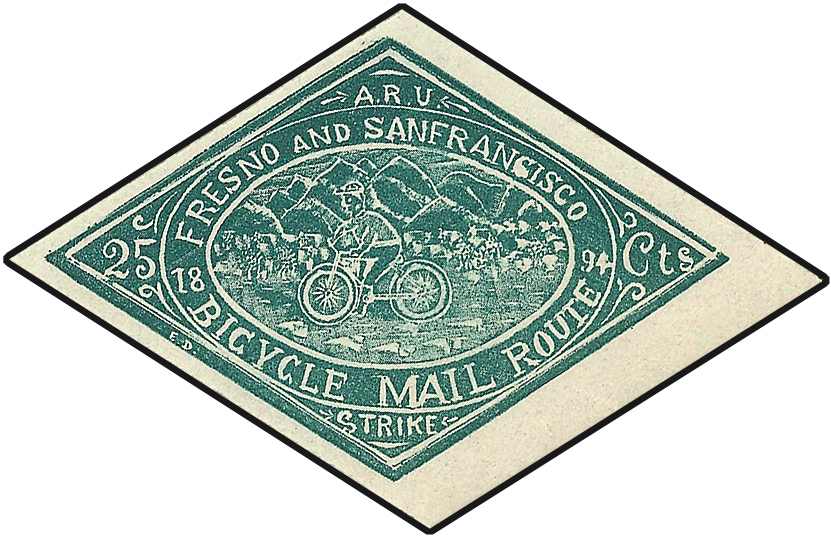 The 1894 25¢ green Bicycle Courier Mail Route California local stamp from retouched die with the spelling error corrected (Scott 12L2) is a good buy at the 2015 Scott Specialized Catalogue of United States Stamps and Covers value of $30 in unused condition.

United States — Local stamps are a fascinating, if sometimes bewildering collecting specialty. They were issued by private local posts that supplemented or competed with the United States Post Office Department. They were severely restricted by the Act of 1861, which gave the Post Office Department a virtual monopoly on the delivery of mail. After 1861, when new local services did start up, they were usually quickly suppressed by the government.

Many local stamps are beyond the means of all but the most well-heeled collectors. But if you want to get your toe wet in this area, a good place to start is with the 1894 25¢ green Bicycle Courier Mail Route, California, local stamp from retouched die with the spelling error corrected (Scott 12L2). This affordable stamp is of interest to bicycle topicalists.

This local post was established to carry mail by bicycle courier from Fresno to San Francisco and back during a strike by the American Railway Union. The first mail run was July 6, 1894. The service was discontinued July 18, 1894, when the strike ended.

The 2015 Scott Specialized Catalogue of United States Stamps and Covers values the 25¢ Bicycle Courier stamp in unused condition at $30, and it is a good buy at that price. Beware of modern fakes, which usually can be identified by modern printing technology and paper.

Abu Dhabi —The Emirate of Abu Dhabi on the southeastern tip of the Arabian peninsula is not a country that is widely collected in the United States, although many of the issues have topical interest.

Abu Dhabi began issuing stamps as a British protectorate in 1964. It gained independence in 1971 and almost immediately became one of the founding states of the United Arab Emirates.

Many of the stamps of Abu Dhabi listed in the 2015 Scott Standard Postage Stamp Catalogue have relatively high catalog values for stamps of the period. While most of the values for stamps in used condition are close to the mark, we think that they are generally overvalued in mint never-hinged condition, and that most can be found at 50 percent to 75 percent of Scott catalog value.

As is sometimes the case with modern stamps of Asian countries, cacheted first-day covers of Abu Dhabi can be much more valuable than the stamps in mint never-hinged condition. One such example is the cacheted FDC for the first definitive set (Scott 1-11) of 1964. The Scott catalog values the set at $113 in mint never-hinged condition. A cacheted FDC for the set recently sold for approximately $250 after spirited bidding in an online auction.

Knowledge is power. Browse dealers’ cover boxes and you might get lucky. — H.G. & R.M.