U.S. Stamp Notes: Tips for expertizing the Kansas-Nebraska overprints of 1929 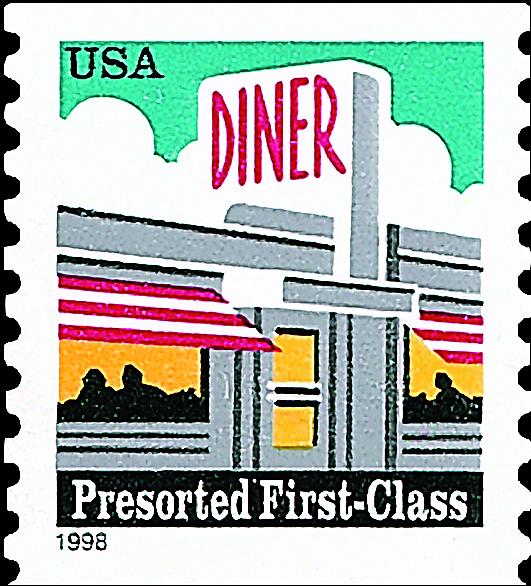 Dolores Chiaramonte of Valley Stream, N.Y., wins one of two prizes in the February U.S. Stamp Notes cartoon caption contest, with this philatelic line that reflects the diner’s opening ceremony: "Grand Opening! I'm glad there was no first day cov 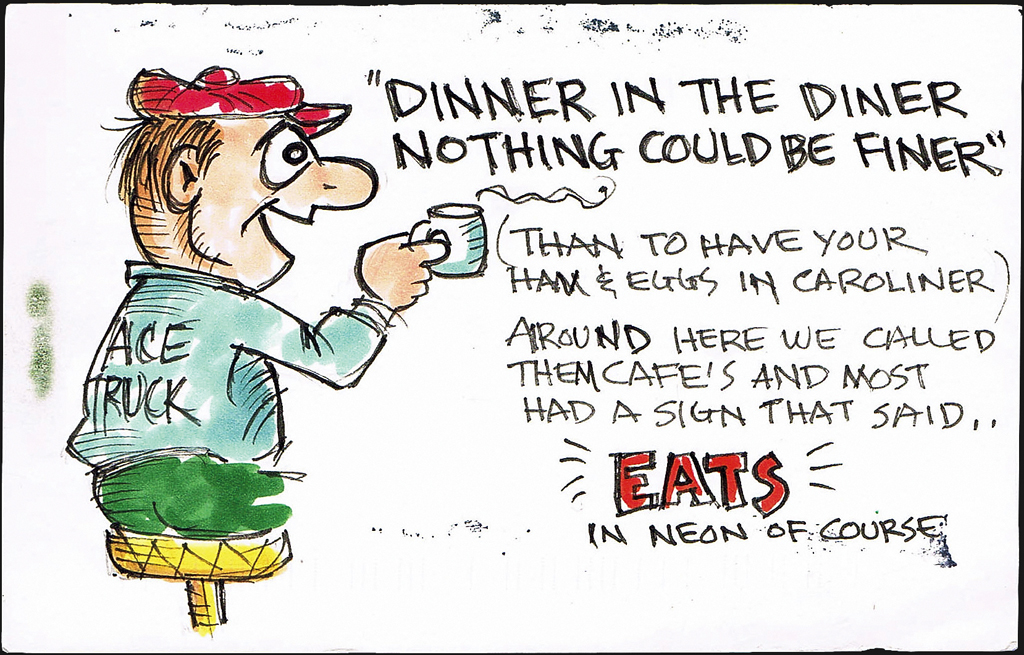 One of the more colorful entries received for the Diner stamp contest is this classic from James Thomas of Edmond, Okla.

The horizontal width of the Kansas and Nebraska overprints is also important, and this handy aid made by Linn’s reader Thomas Heifner using a stamp and ice pop stick can help to identify fakes. 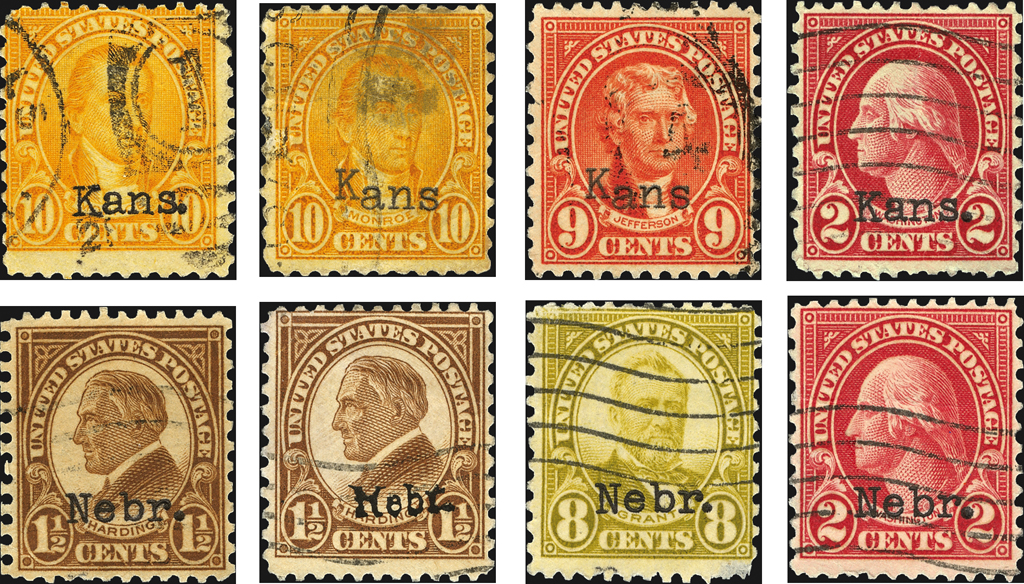 Compare the two genuine overprints on the 6¢ stamps to these fakes. The size and placement of the letters are key indicators, and the fakers often get the period wrong, too.

These 6¢ stamps show the genuine Kansas and Nebraska overprints. 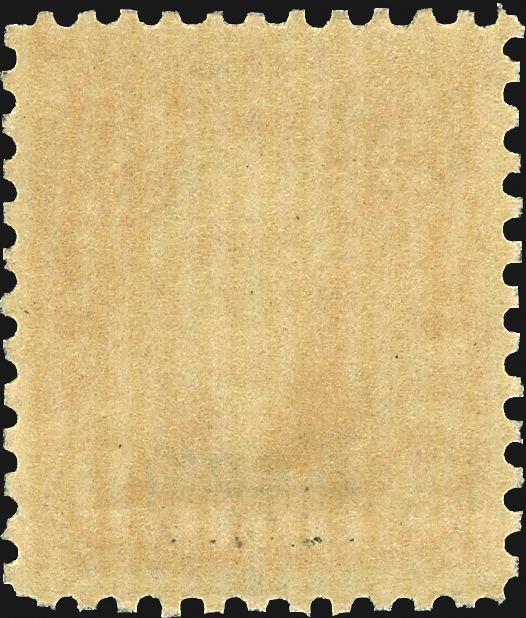 Note the vertical ridges and single horizontal gum breaker on the back of this 9¢ Kansas overprint. This is a primary identifier for genuine Kansas-Nebraska stamps.

Is it possible that the Kansas-Nebraska overprints in your collection have been faked?

Unfortunately, the answer is yes.

The Scott Specialized Catalogue of United States Stamps and Covers provides this introductory note: “This special issue was authorized as a measure of preventing losses from post office burglaries. Approximately a year’s supply was printed and issued to postmasters. The P.O. Dept. found it desirable to discontinue the State overprinted stamps after the initial supply was used.”

This cryptic entry glosses over the fact that there were many robberies in Midwest post offices during the late 1920s. To combat this trend, the Post Office Department came up with the idea to print the name of a state on definitive stamps, so that if stolen in a robbery, the stamps could not be sold in quantity in another state.

There were plans to provide state-overprinted definitives for all 48 states. The Kansas-Nebraska overprints on the 1926-27 issues with gauge 11 by 10½ perforations were merely a test.

According to researcher Gary Griffith in his book United States Stamps 1927-32 (published by Linn’s Stamp News in 2001), those two states were chosen because they were part of the territory of Louis A. Johnson, postal inspector-in-charge at Kansas City, Mo., who had recommended identifying stamps in this manner.

The Kansas-Nebraska overprints were officially placed on sale at the Philatelic Agency in Washington, D.C. on May 1, 1929, but they had been distributed to post offices in the two states on April 13, and some were placed on sale almost immediately. Some denominations are known canceled as early as April 15.

To make a long story short, the experiment was considered to be a failure. Not only did the stamps have to be overprinted using the recently developed precanceling process for rotary press-produced stamps, but the overprints required special handling and accounting to assure that they went to the correct post offices.

Once the stamps arrived, complaints began to roll in: the black overprints were hard to see on dark stamps (the 7¢ black, for example); and because the POD had prohibited their use for local precancels, a separate order was necessary for unoverprinted stamps to be used for that purpose.

Also, there was the problem of recognizing stamps legitimately sold in one state, but used in another.

While the POD had ruled that these stamps were valid for postage anywhere in the United States, not all postmasters understood that to be the case, resulting in unwarranted rejections by post offices.

Beyond that, many businesses outside the two states that had received these stamps in payment of small debts didn’t know whether such stamps would be rejected, and that resulted in thousands of questions seeking clarification.

As a result, it was decided to let the idea die a quiet death; there would not be similar stamps for the other 46 states.

But philatelic confusion created by just the two sets remains. It stems from the fact that these overprints, while mostly not expensive, are much more difficult to find than the basic unoverprinted stamps.

The Scott catalog lists mint examples of the overprints at $2.50 to $90, with most being $35 or much less. For the unoverprinted stamps, the Scott value is $17.75 for the entire set.

Thus, there has been money to be made by faking the overprints to sell to collectors, and it has been done by many people, in many ways, over many years.

There are so many of these fakes in the philatelic marketplace and in albums, that collectors often refuse to buy these stamps without a certificate of authenticity, an uncertain proposition since most will cost less than the cost of a certificate.

This is especially true for used examples.

An article from the Feb. 21, 1949 issue of the Chambers Stamp Journal provides a view of the extent of this fakery. Titled “Forged U.S. Overprints Lead to Conviction,” it reads, in part, “Despite the fact that there is currently no specific Federal statute regulating the falsification of overprints on canceled United States stamps, a conviction was obtained in the case of a former New York stamp firm proprietor indicted on a charge of applying spurious overprints in order to manufacture such U.S. varieties as the Kansas-Nebraska sets, Canal Zone, Guam, Philippines and Puerto Rico issues.”

According to the article, the defendant, who was not named, was the first to stand trial out of a group of seven dealers originally indicted in 1944. He was sentenced to a year and a day in prison, a fine of $1,000, and placed on probation for an additional two years.

Some defendants had already pled guilty, and it is a safe bet that after this conviction, others would as well.

The article continues: “The chief argument for the defense was the fact that most of the overprinting was done on canceled stamps. However, Judge Simon F. Rifkin ruled that postage stamps whether canceled or not, are still government securities.

The article also describes some of the evidence: “Approximately 10,000 original stamps and suspected forgeries were photographed in detail by the Philatelic Research Laboratory in order to build an air-tight case for the government … More than 500 of the photographs, along with 79 of the forged overprints, were shown to the jury during the two-day trial. The jury needed only three minutes to arrive at its verdict.”

So, let’s take a look at how expertizers deal with these issues, whether mint or used. We need to start with the basic, unoverprinted stamps because forgers have not always been careful to put their handiwork on the correct stamp.

The stamps are rotary press-printed, perforated gauge 11 by 10½ with 14 vertical gum ridges, and a single, or at most two, horizontal gum breakers.

The overprints were added directly after the printing of the designs, and before the application of the gum. Thus, for mint examples, there can be no impression in the gum of the overprint, as there often is when a fake overprint is added after gumming.

Think of the impression left by a typewriter key on the back of relatively thin paper.

For plate blocks, it is worth checking the plate number against the list of known plates in the Durland Standard Plate Number Catalog, as only a small number of plates were used for the overprints.

For example, the 2¢ Nebraska is associated with nine plates. There were more than 250 plates used to print the basic 2¢ stamp.

Look at the quality and shape and size of the genuine overprints shown nearby. Then compare them with the group of fake overprints in the other illustration.

Linn’s reader Thomas Heifner of Panama City Beach, Fla., has created his own aid for examining Kansas-Nebraska overprints. He horizontally slices inexpensive used stamps through the overprints, affixes them to ice pop sticks and then uses them to compare with candidates.

Finally, you will need a good magnifier with a resolution of 10-power or greater for this test, but overprints added on a used stamp can be detected because the overprint will be on top of, instead of underneath, the cancellation.

Unfortunately this booklet is out of print, but examples can be found through philatelic literature dealers, and can be obtained as photocopies from the American Philatelic Research Library.

If you are a member of the APS, the handbook is available as a pdf on the members-only section of the website.

A helpful article by Ken Lawrence, “New fake Kansas-Nebraska overprints circulating through stamp marketplace,” was published in the Aug. 20, 1990, issue of Linn’s. With his permission, I am happy to make copies of that article available to Linn’s readers at cost: 10¢ in mint postage and an addressed, stamped envelope sent to me, John Hotchner, Box 1125, Falls Church, VA 22041-0125.

The design of the 1998 nondenominated (25¢) Diner presorted first-class stamp issued in 1998 does not include a brand name, and quite a number of entries in the February cartoon caption contest featuring that stamp played off that fact.

As David Schwartz of Commack, N.Y., put it, “Presorted First Class Diner: What a strange name!”

Others applied the title to the food, or the service, such as “Presorted First Class seating available” from Henrik Rossell of Poolesville, Md.

A more critical read was provided by Mildred Barylski of Alexandria, Va.: “First class diner? Not this one!”

Another clever approach based on the design comes from Nathan Wendland of Winona, Minn.: “I’m glad we decided to advertise in the Cloud.”

Several entries focused on one of the primary features of a diner — the (usually) moldy oldies that are available on the jukebox. Most of these seemed to identify the all-time favorite of both children of the 1950s and 1960s, and of stamp buyers in the 1990s.

One example was sent in by Darlene Arendt of Chaska, Minn.: “Which record, young Elvis or old Elvis?”

I don’t usually show actual entries, but will make an exception this month with the postal card shown here. In case the text is too small to read, it says, “Dinner in the diner. Nothing could be finer (than to have your ham & eggs in Caroliner). Around here we call them cafes and most had a sign that said ‘Eats’ in neon of course,” by James Thomas from Edmond, Okla.

The philatelic line winner comes from Dolores Chiaramonte of Valley Stream, N.Y., who blends an opening ceremony with philately, as shown nearby.

The winner on the nonphilatelic side is “Talk about inflation! Look at those prices — 29¢ for a hamburger! Who in the world can afford to eat here?!” by Thomas Misiewicz of Martinsburg, W.Va.

“Who is this Jay Z they have on the jukebox?” from Tom and Laura Tomaszek of Cedar Rapids, Iowa.

“A snow cone for dessert! Hey, what did you expect? This is the Lake Effect Diner in Buffalo, N.Y.” by Larry Winkelsas of Kenmore, N.Y.

“Let’s visit the Postage Stamp Diner where everything is ordered by plate number,” sent by Steve Kotler, of San Francisco, Calif.

“C’mon in folks. The food is first class, and it doesn’t take forever to reach your table,” from Rick Abrams of Delray, Fla.

“During the month of March, when you purchase a bun, you will have a chance of finding one of 100 randomly selected hamburgers,” by Eric Wile of Greensboro, N.C.

“One stop shopping — Dine in; Mail out!” sent by Walter Robidoux of Smyrna, Ga.

“Waitress, in honor of Elvis, I’ll have another bacon, peanut butter and banana sandwich!” from Edgar Dunlap by e-mail.

The next cartoon caption contest will be announced in the April 13 issue of Linn’s.