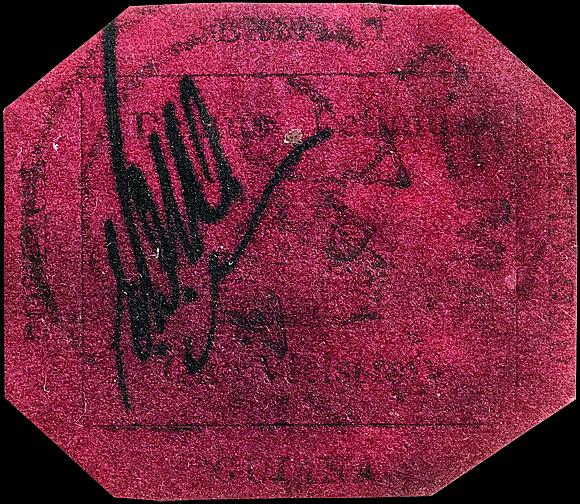 The world’s most valuable stamp, the unique 1856 British Guiana 1¢ Magenta, will be exhibited in Washington, D.C., beginning June 4. The identity of the stamp’s owner will be revealed that day as well.

The 1856 British Guiana 1¢ Magenta, once again crowned the world’s most valuable stamp, will be on public display almost continuously for at least the next couple of years.

And the identity of the still-anonymous collector who spent $9.48 million last year to buy the unique stamp will soon be revealed.

The stamp will be exhibited in the William H. Gross Stamp Gallery at the Smithsonian’s National Postal Museum in Washington, D.C., but plans call for it to be exhibited in Monaco later this year, and in New York City in 2016.

To announce the Washington exhibit, the museum is preparing a press release scheduled for June 4, the opening day, and will disclose the identity of the new owner then.

The 1¢ Magenta was sold at auction on the evening of June 17, 2014, for $9.48 million, the highest price ever paid for any single stamp. It was hammered down in a special sale at Sotheby’s in New York City that was attended by philately’s elite.

The final bid of $7.9 million was augmented by a 20 percent buyer’s fee.

The identity of the winning bidder and present owner was never revealed.

The museum’s website specifically notes two stretches when the stamp will be absent, however.

The first is from Nov. 27 to Dec. 9, when it will be out for display at Monacophil 2015, the stamp show and exhibition taking place Dec. 3-5 at Terrasses de Font­vieille in Monaco.

The Monacophil website has announced that the stamp will be on display as part of its “traditional exhibition of 100 world rarities.”

The second absence is planned for May 23-June 10, 2016. Those dates correspond to the schedule for World Stamp Show-NY 2016, which is taking place May 28-June 4 at the Javits Center in New York City.

The New York show has not announced that the stamp will be on display there, but show officials made it clear shortly after the stamp sold at auction last year that they would welcome the opportunity to host the famous stamp for exhibit.

Emery told Linn’s that there are plans to show the stamp at the New York event, but that the details have not yet been worked out.

The British Guiana 1¢ Magenta is the only example known of the stamp, Scott 13. The imperforate and dark colored stamp has a worn appearance and is cut to the shape of an octagon, but it has attracted the attention of some of the world’s most famous collectors.

Issued in 1856, the stamp was discovered in 1873 by a Scottish schoolboy named Louis Vernon Vaughan who lived in British Guiana with his family. He sold it for 6 shillings, and the price has escalated ever since.

Its owners over the years have been few, including Thomas Ridpath, Count Philippe la Renotiere von Ferrary, Arthur Hind, Frederick Small and a consortium of buyers headed by Irwin Weinberg.

In 1980 the stamp was auctioned by Robert A. Siegel of New York, and purchased anonymously by John E. du Pont for $935,000 (including a 10 percent buyer’s premium).

Du Pont died in a Pennsylvania prison Dec. 9, 2010, where he was serving a sentence for the Jan. 26, 1996, shooting death of Olympic wrestler David Schultz.

Other stamps from the du Pont collection have been auctioned in recent years, including the rest of his British Guiana collection, offered by the Swiss firm David Feldman on June 27, 2014.

Other than its appearance at last year’s New York auction, the 1¢ Magenta has not been displayed publicly since it was on view almost 30 years ago at the 1986 Ameripex international stamp exhibition in Chicago.