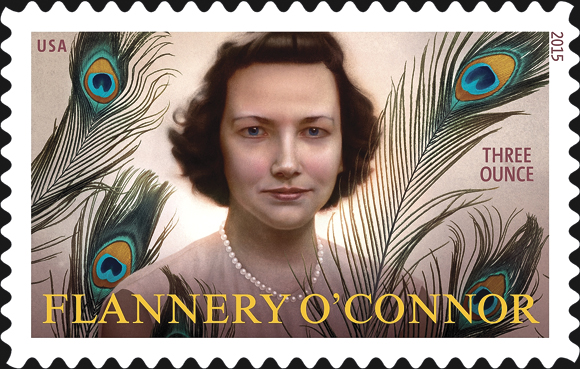 A new nondenominated (93¢) stamp honoring author Flannery O'Connor will be issued June 5. The stamp fulfills the three-ounce letter rate that goes into effect May 31.

Information about the stamp was first revealed May 18 during a teleconference hosted by Mary-Anne Penner, the new acting Stamp Services director for the USPS.

The design of the stamp shows a portrait of O'Connor digitally created by Sam Weber, based on a photograph. In the background are images of peacock feathers, a nod to O'Connor's fondness for the exotic birds that were referenced in her writings, and which she raised on the Georgia farm where she lived.

The artists creating designs for the Literary Arts series have consistently followed a similar layout of a horizontal format with a featured portrait and relevant background scene since the 32¢ Tennessee Williams stamp (Scott 3002) was issued in 1995. The first Literary Arts series commemorative was the 15¢ John Steinbeck stamp of 1979 (1773).

At Georgia College and State University, O'Connor was editor of Corinthian, the college literary magazine. She was accepted into the University of Iowa's prestigious Writer's Workshop, and her early stories were published in Sewanee Review. She received her Master of Fine Arts degree in 1947.

O'Connor was stricken with lupus in 1950 and lived on the family farm, Andalusia, in Milledgeville, Ga., while continuing to write short stories and work on her first novel.

Despite her fragile health, O'Connor traveled to speaking engagements and welcomed visitors to her home.

She also wrote a number of reviews and essays, including a 1961 article for Holiday magazine titled "Living With a Peacock."

Another short story collection, Everything That Rises Must Converge, was published in 1965.

A collection titled The Complete Stories won the 1971 National Book Award for fiction.

Some USPS rates set to increase May 31