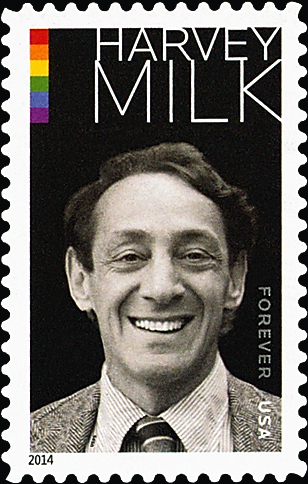 One year ago today, a nondenominated (49¢) forever stamp commemorating politician and gay rights activist Harvey Milk was issued in Washington, D.C., with a first-day ceremony at the White House.

Harvey Milk was born May 22, 1930, in Woodmere, N.Y., and enlisted in the U.S. Navy after graduating from the New York State College for Teachers in 1951. He served as a naval diving instructor, achieving the rank of lieutenant junior grade.

Active in human rights efforts and local issues, he became known as the unofficial "mayor of Castro Street." He won election as a San Francisco city supervisor within six years, one of the first openly gay elected officials in the United States.

"A commitment to serving a broad constituency, not just gay people, helped make Milk an effective and popular leader. He was an eloquent speaker with a winning sense of humor and was able to build coalitions between diverse groups. His achievements gave hope and confidence to gay people at a time when the community was encountering widespread hostility."

The Harvey Milk stamp (Scott 4906) shows a circa 1977 black and white photograph by Daniel Nicoletta.