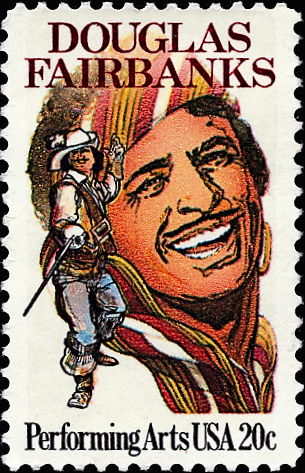 The 20¢ stamp honoring swashbuckling actor Douglas Fairbanks, who was born May 23, 1883.

At the dawn of the 20th century, a dashing young actor was just embarking on his exciting new career. Born Douglas Eaton Thomas Ulman on May 23, 1883, he had become Douglas Fairbanks when his mother took on a new name after divorcing Douglas' father.

As a youngster Fairbanks had undertaken some amateur roles in Denver, Colo., his hometown, but he took a chance on moving to New York City in his late teens, making his Broadway debut in 1902.

More than a decade would pass before Fairbanks, now married and with a young son, moved to California, where he appeared in his first motion picture, The Lamb (1915), a light-hearted Western. Though he would become one of the most famous swashbuckling stars of his age, Fairbanks also found himself in some offbeat roles, including that of the drug-addled detective Coke Ennyday, a parody of Sherlock Holmes, in the 1916 comedy The Mystery of the Leaping Fish.

He was married to Anna Beth Sully and their son, Douglas Fairbanks Jr., would eventually become an actor like his father. But Fairbanks would divorce his wife after a dozen years together to marry actress Mary Pickford in 1920.

Both Pickford and Fairbanks were immensely popular stars, and Fairbanks found even greater success with action-adventures like The Mark of Zorro in 1920 and The Thief of Bagdad in 1924.

When talking films became the industry norm, Fairbanks found his star fading, and he retired in 1934. He and Pickford divorced, and Fairbanks married Sylvia Ashley.

Fairbanks suffered a heart attack on Dec. 12, 1939, and it's been reported that his last words, spoken to a nurse who asked him how he was feeling, were "I've never felt better."

The 20¢ Douglas Fairbanks stamp (Scott 2088) was the sixth issue in the 12-stamp Performing Arts commemorative series. It was issued May 23, 1984, marking Fairbanks' 101st birthday.