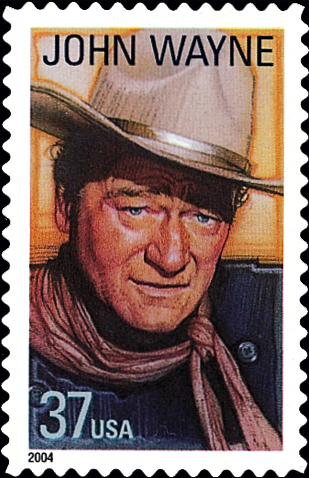 Legendary film star John Wayne first appeared on a United States stamp in 1990, just about 11 years after his death on June 11, 1979.

Wayne was born May 26, 1907; his birth name was Marion Robert Morrison.

That first stamp was a 25¢ commemorative in the Classic Films set (Scott 2448). The portrait of Wayne by artist Thomas Blackshear shows him in the role of the Ringo Kid in John Ford's 1939 Western, Stagecoach. Though Wayne had appeared in more than 80 films when Stagecoach was released, his performance is considered by some to be the breakout role that made him a star.

Wayne was honored again in 2004 on a 37¢ stamp in the Legends of Hollywood commemorative series. The portrait for this issue was created by noted entertainment artist Drew Struzan, who based his image on a black and white publicity photo of Wayne for the 1962 film The Man Who Shot Liberty Valance, another John Ford Western.

In the selvage artwork, also illustrated by Struzan, Wayne is shown in his role as Ethan Edwards in yet another John Ford Western, The Searchers, from 1956.

Most recently, Wayne appears in a supporting role on a forever stamp issued May 23, 2012, to honor — director John Ford. Another scene from The Searchers is used in the background of a stamp the shows a dominating portrait of Ford at right. The illustration by Gary Kelley depicts Wayne, again as Ethan Edwards, through a doorway, walking off into the desert landscape.

Wayne's movie career spanned half a century and saw him starring in a great many films now considered classics, including Sands of Iwo Jima (1949), Hondo (1953), The Alamo (1960) and El Dorado (1967). His 1969 role as marshal Rooster Cogburn in True Grit brought him his only Oscar win, for best actor.

On May 26, 1979, Wayne received the Congressional Gold Medal. He died less than three weeks later.

The following year Wayne was awarded the Presidential Medal of Freedom by President Jimmy Carter.