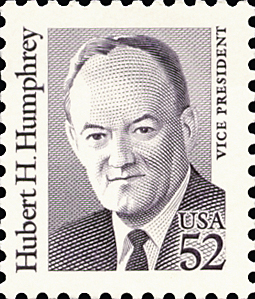 Hubert Horatio Humphrey Jr., was born May 27, 1911, in Wallace, S.D. His father was a pharmacist, and his mother was Norwegian by birth.

Humphrey studied pharmacy and worked in his father's drugstore before returning to school and obtaining a bachelor's degree at the University of Minnesota in 1939, and a master's degree in political science from Louisiana State University in 1940.

Humphrey married Muriel Buck in 1934, and they had four children. He volunteered for service in the Navy and the Army during World War II, but was rejected because of color blindness and physical concerns. He served as director of the War Manpower Commission and was elected mayor of Minneapolis in 1945.

A liberal member of the Democratic Party, Humphrey became involved in national politics and pushed for broad civil rights legislation and opposition to racial segregation. He spoke passionately at the 1948 Democratic convention, which nominated incumbent Harry S. Truman for president on a pro-civil rights platform. Truman won the election, and Humphrey was elected to the U.S. Senate.

Humphrey unsuccessfully campaigned for the Democratic presidential nomination in 1952 and 1960. He continued working in the Senate and became the Majority Whip.

When incumbent Lyndon Johnson ran for president in 1964, he sought out Humphrey as his running mate. Their victory made Humphrey vice president of the United States, an office he held for a single four-year term.

In March 1968, Johnson announced that he would not run for president again. Humphrey became the Democratic Party’s nominee for president, but he lost the election that year to Richard Nixon.

After returning to the Senate in 1971, Humphrey served there until his death from cancer in 1978.

Humphrey was posthumously awarded the Presidential Medal of Freedom in 1980.