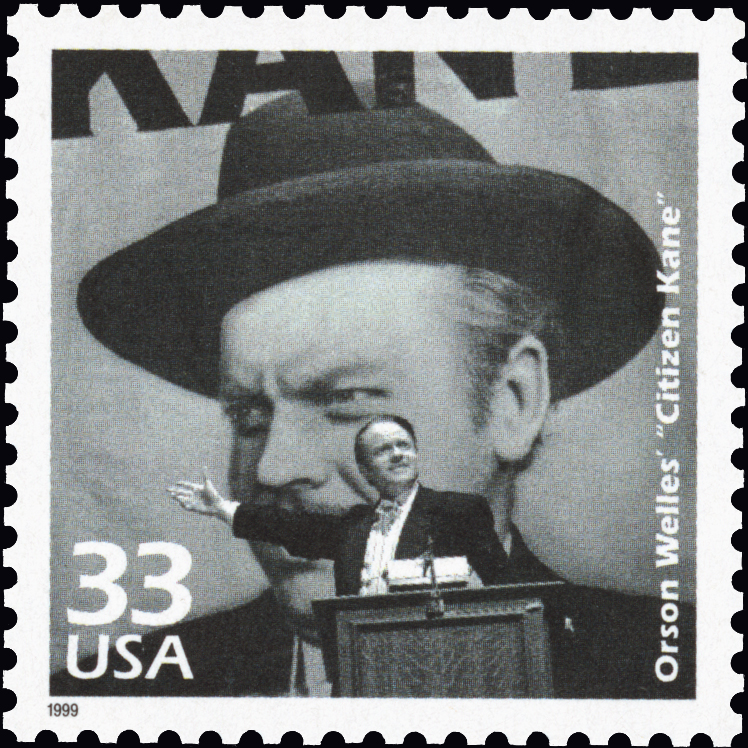 A 33¢ Celebrate the Century stamp honoring actor and filmmaker Orson Welles, who was born 100 years ago today on May 6, 1915.

A 33¢ stamp honoring actor and filmmaker Orson Welles and his first (and most famous) production, the 1941 film Citizen Kane (Scott 3186o), was issued Feb. 18, 1999. The stamp is from the set commemorating the 1940s as part of the much longer Celebrate the Century series.

The front of the stamp shows a scene from Citizen Kane where Welles, as publisher Charles Foster Kane, stands at a podium as a candidate for governor and addresses an audience at Madison Square Garden. An enormous campaign poster picturing Kane (Welles) is visible behind him.

"Orson Welles' 'Citizen Kane'" in inscribed reading up from the lower right corner.

Printing on the reverse of the stamp states: "Released in 1941, Orson Welles' 'Citizen Kane' was hailed for its artistic and technical innovations. The psychological study of a newspaper tycoon, it has consistently been considered one of the best movies in the history of film."

Welles, who was just 25 when he made the film, was also the co-writer, producer and director. The film was nominated for best picture, best director, best actor and best original screenplay at the 1941 Academy Awards, winning the screenplay category for Welles and co-writer Herman J. Mankiewicz.

Two years earlier, Welles had become famous with his narration of the science fiction radio adaptation of H.G. Wells' The War of the Worlds, which induced panic among some radio listeners who mistook the drama for an actual news report.

Welles directed another dozen or so feature films after Citizen Kane, and appeared in numerous other films, including Jane Eyre (1943) and The Third Man (1949), as well as television productions.