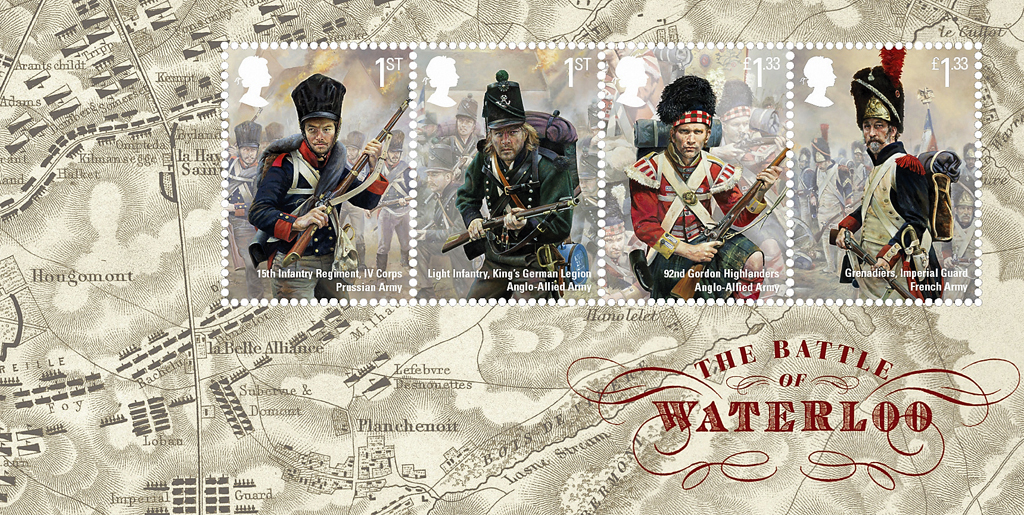 Royal Mail’s souvenir sheet commemorating the 200th anniversary of the Battle of Waterloo includes four stamps showing rank-and-file soldiers of the Anglo-allied, Prussian and French armies. A map of the battle from a 19th-century engraving by Alexander Keith Johnston is pictured in the selvage.

Great Britain’s Royal Mail will issue 10 stamps June 18 to mark the 200th anniversary of the Battle of Waterloo.

Fought June 18, 1815, near Waterloo, in what is now Belgium, an allied army of British forces under the Duke of Wellington, and Prussian forces under Field Marshall Blucher defeated Napoleon and the French army.

The battle also ended more than two decades of conflict in Europe and “essentially saw the birth of modern Europe,” according to the new-issue announcement from Royal Mail.

Six of the stamps represent key events of the battle: the defense of Hougoumont farm; the Scots Greys at the charge of the Union Brigade; the massed ranks charge of the French cavalry, which was repulsed by British infantry squares; the King’s German Legion’s defense of La Haye Sainte farm; the arrival of the Prussians and the capture of Plancenoit; and the final attack of the French Imperial Guard.

These six stamps were printed separately in sheets of 36 (sold in panes of 18 at most postal outlets).

The other four stamps feature rank-and-file soldiers who fought in the battle. These stamps are se-tenant (side-by-side) in a souvenir sheet.

Waterloo 200, the official body recognized by the United Kingdom government to support the commemoration of the Battle of Waterloo during its bicentenary, reports that of the 200,000 soldiers who fought that day, 12,000 were killed and 35,000 wounded.

The designs of the six stamps featuring key events of the battle show 19th-century paintings.

For example, a nondenominated first-class stamp reproduces Defence of the Chateau de Hougoumont by the Flank Company, Coldstream Guards, 1815, painted by Denis Dighton in 1815.

The National Army Museum on its website that sells prints, describes the scene shown on this watercolor: “The Chateau de Hougoumont was a strong-point in the British defensive line during the Battle of Waterloo on 18 June 1815.

“Hougoumont was not taken in nearly nine hours of continuous fighting. The nearest the French came to capturing the chateau was when a determined attack by Sous-Lieutenant Legros (nicknamed ‘L’enfonceur’ or ‘The Smasher’), wielding a huge axe, managed to break through the North gate.

“The commanding officer, Lieutenant-Colonel Macdonell, and his Guardsmen managed to shut the gate, trapping 30 Frenchmen inside. They were all killed apart from a young drummer boy who was spared.”

The current first-class rate is 63 pence.

Two other stamps also feature paintings by Dighton, who was appointed military painter to the prince in 1815: The Battle of Waterloo: The Charge of the Second Brigade of Cavalry on a first-class stamp, and Attack on the British Squares by French Cavalry, Battle of Waterloo, 1815 on a  £1 stamp.

The former painting was exhibited at the Royal Academy in 1817 and is part of the Royal Collection Trust.

According to information on the Royal Collection Trust’s website, the charge began around 2 p.m., and, during the fighting, Sgt. Charles Ewart of the 2nd Royal Scots Greys captured the standard of the French 45th Regiment. Forty years later, the eagle from that standard became an emblem of the regiment.

The latter painting is part of the collection of the National Army Museum, which summarized the attack: “Marshal Ney, having committed most of his infantry reserves earlier in the fight, launched his 9,000 cavalrymen against the British centre in a desperate bid to win the battle. The British battalions formed into squares to meet the French charge. Had Ney attacked with better artillery support he may have broken the British squares, but they held firm against numerous cavalry assaults. Ney, dubbed the ‘Bravest of the Brave’ by Napoleon, led many of these attacks himself … ”

The second £1 stamp depicts The Defence of the Farm La Haye Sainte, Battle of Waterloo by German painter Adolf Northen. This 1858 painting belongs to the Niedersaechsisches Landesmuseum, or the Lower Saxony State Museum, in Hanover, Germany.

This farm house was the site of heavy fighting for several hours during the battle. The Belgian travel website, http://www.trabel.com, said, “Like Hougoumont and Papelotte, this beautiful farm was transformed into a fortress by the Allied army, garrisoned by six companies of the King’s German Legion, which were later reinforced by two companies of Nassau troops.

“From 2 p.m. onwards they were subjected to furious attack and were finally forced to withdraw. The French finally captured the farm but incurring such a loss of lives and time that they could not exploit their success. Two plaques on the walls commemorate the fierce struggle that took place here.”

Another painting by Northen appears on a £1.52 stamp, Prussian Troops Storm the Village of Plancenoit during the Battle of Waterloo.

For several hours, the small village of Plancenoit was the site of fierce, brutal  fighting between the French and Prussians, with the Prussians eventually overpowering the French.

This painting was purchased by the Duke of Wellington and still hangs in Apsley House, the duke’s London home that now serves as a museum.

The BBC’s Your Paintings website reports that Allan pasted a verso on the back of the painting detailing what it shows. The first sentence reads, “‘The picture represents the last desperate effort of Napoleon to force the left centre of the allied army and turn their position … ”

Silk Pearce designed these six stamps, and International Security Printers printed them by lithography. Each stamp measures 60 millimeters by 30mm and is perforated gauge 14.5.

The souvenir sheet includes two first-class stamps and two £1.33 stamps representing the key nationalities that took part in this conflict.

The first stamp pictures a Prussian infantryman of the 15th Infantry Regiment, IV Corps. Shown next is the Light Infantry, King’s German Legion of the Anglo-allied army. From the same army is the 92nd Gordon Highlanders represented on the next stamp.

The last stamp pictures a grenadier of the French Imperial Guard.

Reproduced in the selvage of the sheet is a Battle of Waterloo map from an engraving by 19th-century Scottish geographer and explorer Alexander Keith Johnston.

Webb & Webb Design Ltd. designed the souvenir sheet, and Chris Collingwood created the illustrations for the stamps. Printed by International Security Printers, the sheet is 146mm by 74mm. The stamps are 27mm by 37mm each and are perforated gauge 14.

Among the other Royal Mail products for the Battle of Waterloo issue are first-day covers; 11 postcards reproducing the designs of the 10 stamps and the souvenir sheet; and a presentation pack containing the stamps, illustrations and text by historian Charles Esdaile.