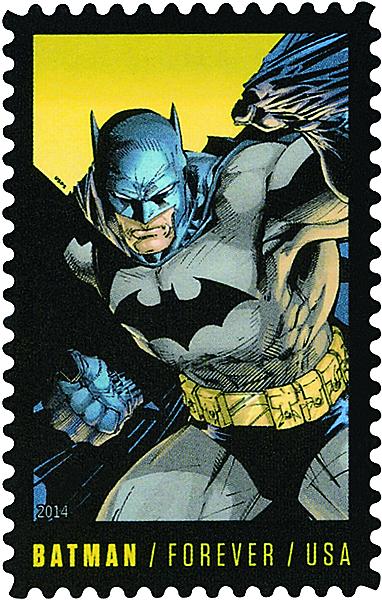 The Batman stamps were a hit with younger voters, picked as the overall favorite in the youth vote. However, in general voting, the Batman set ranked second in the least necessary commemorative category.

The Circus Posters set of eight stamps was the overall favorite of Linn’s readers in the 2014 U.S. Stamp Popularity Poll. The set also took top honors as the best designed commemorative issue of the year. The stamps were issued May 5 in Sarasota, 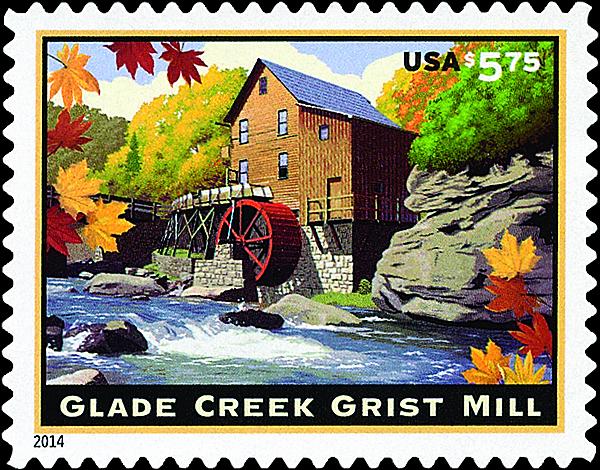 Dan Cosgrove’s rendition of the Glade Creek Grist Mill in West Virginia was applauded by Linn’s readers as the best-designed definitive. 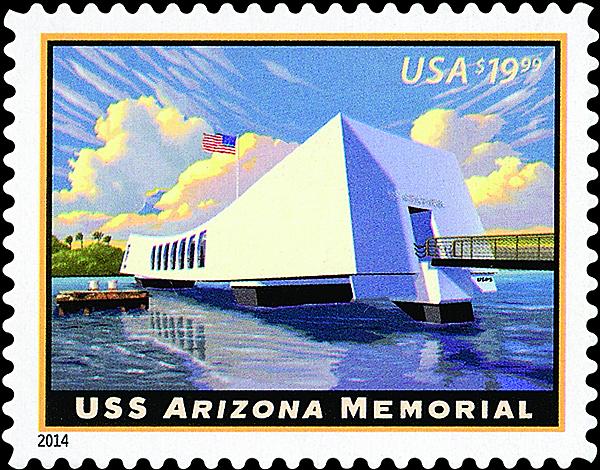 The 2014 definitive stamp chosen as most important was the USS Arizona Memorial issue. 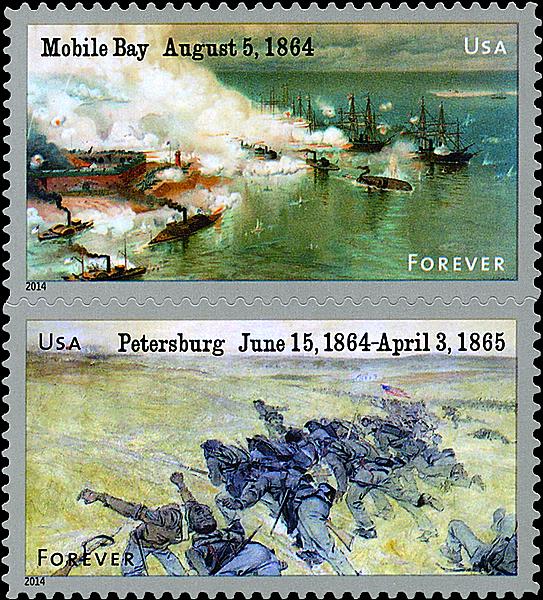 The Civil War:1864 stamps were picked as the most important commemorative issue by voters. 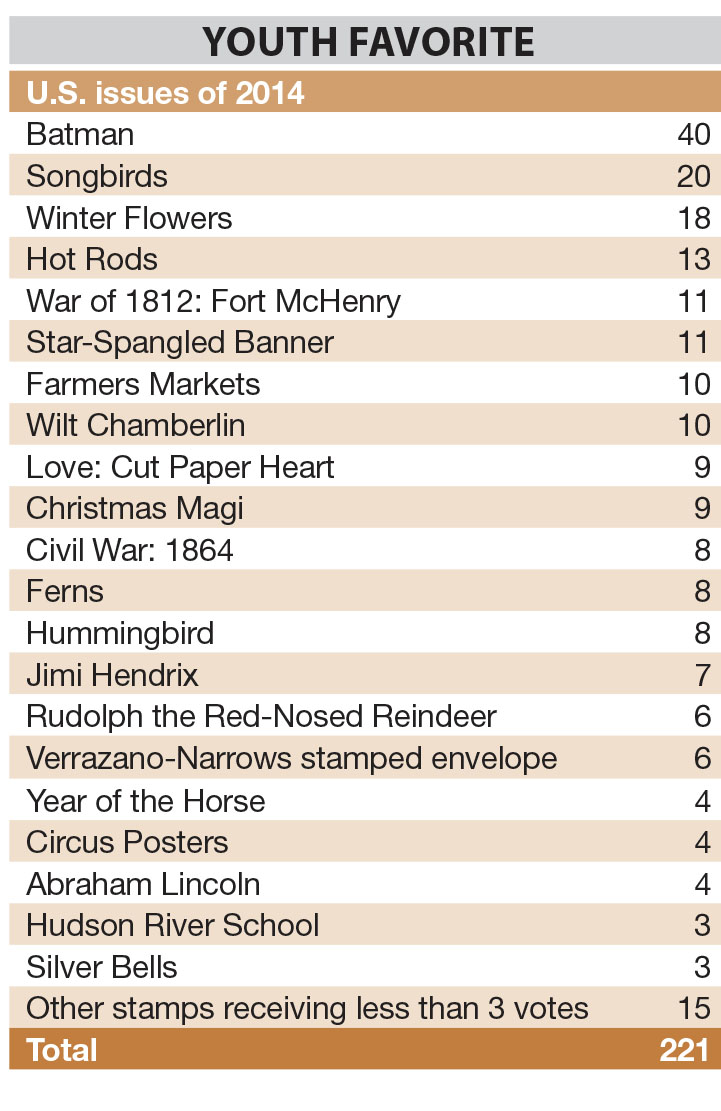 The runaway winner for the youth overall favorite was the Batman set of eight stamps.

The Circus Posters set placed first as the best-designed commemorative issue, with 483 votes. 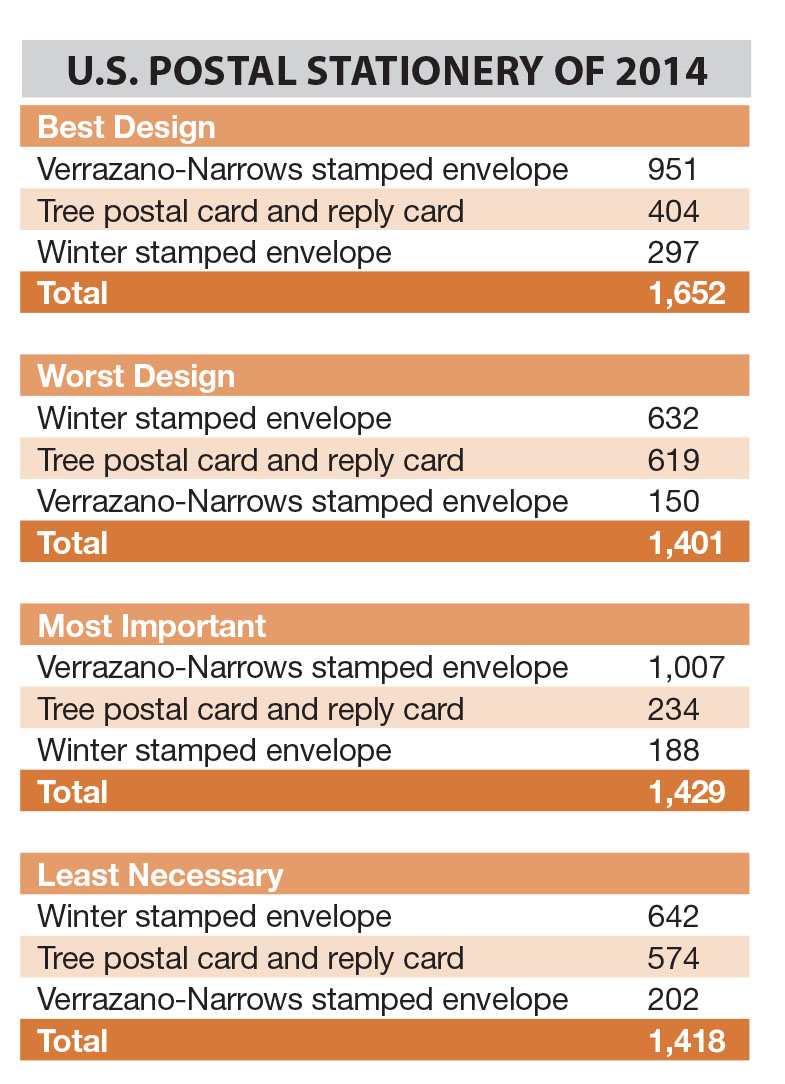 The Verrazano-Narrows Bridge stamped envelope was voted the best design. 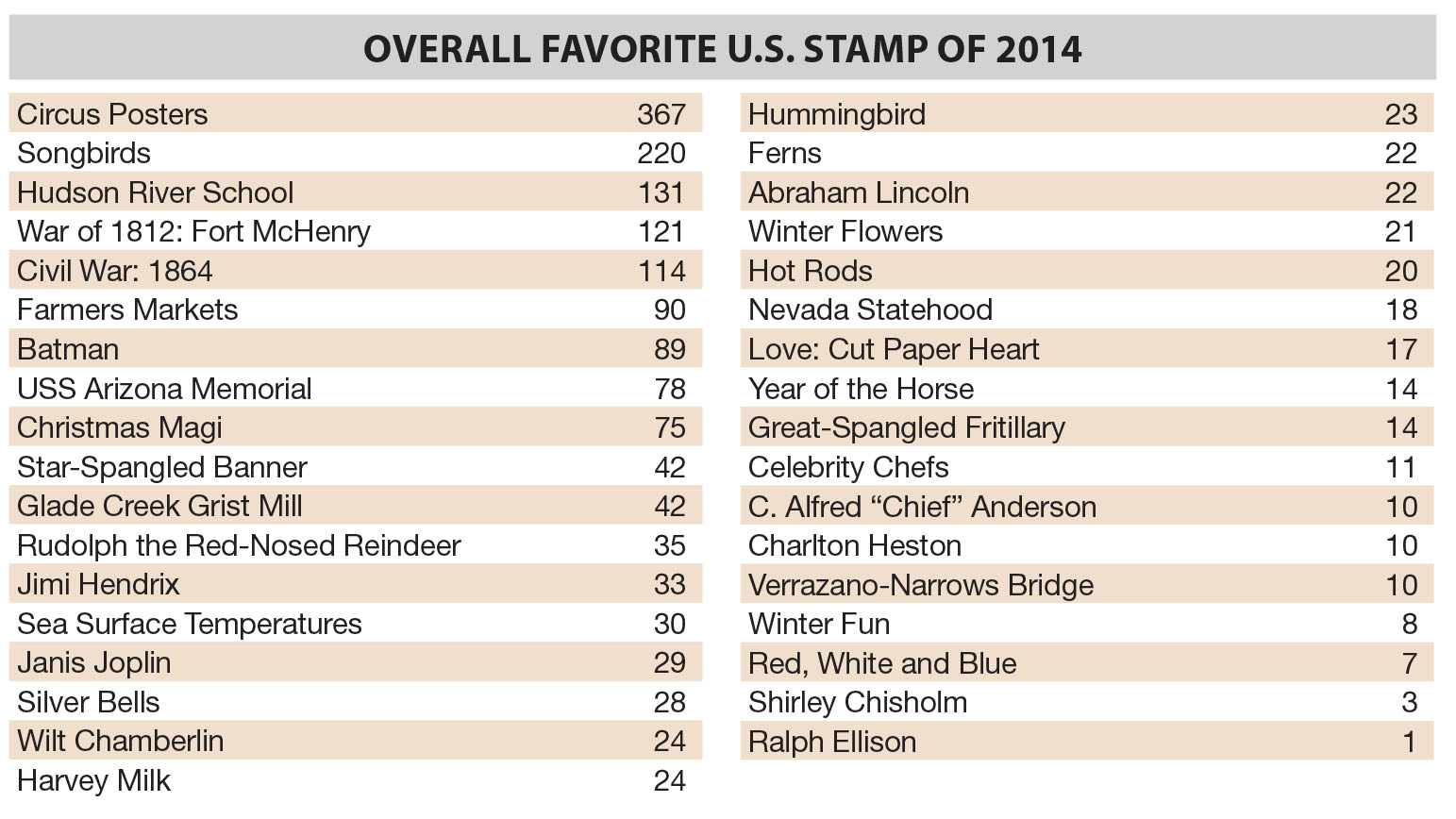 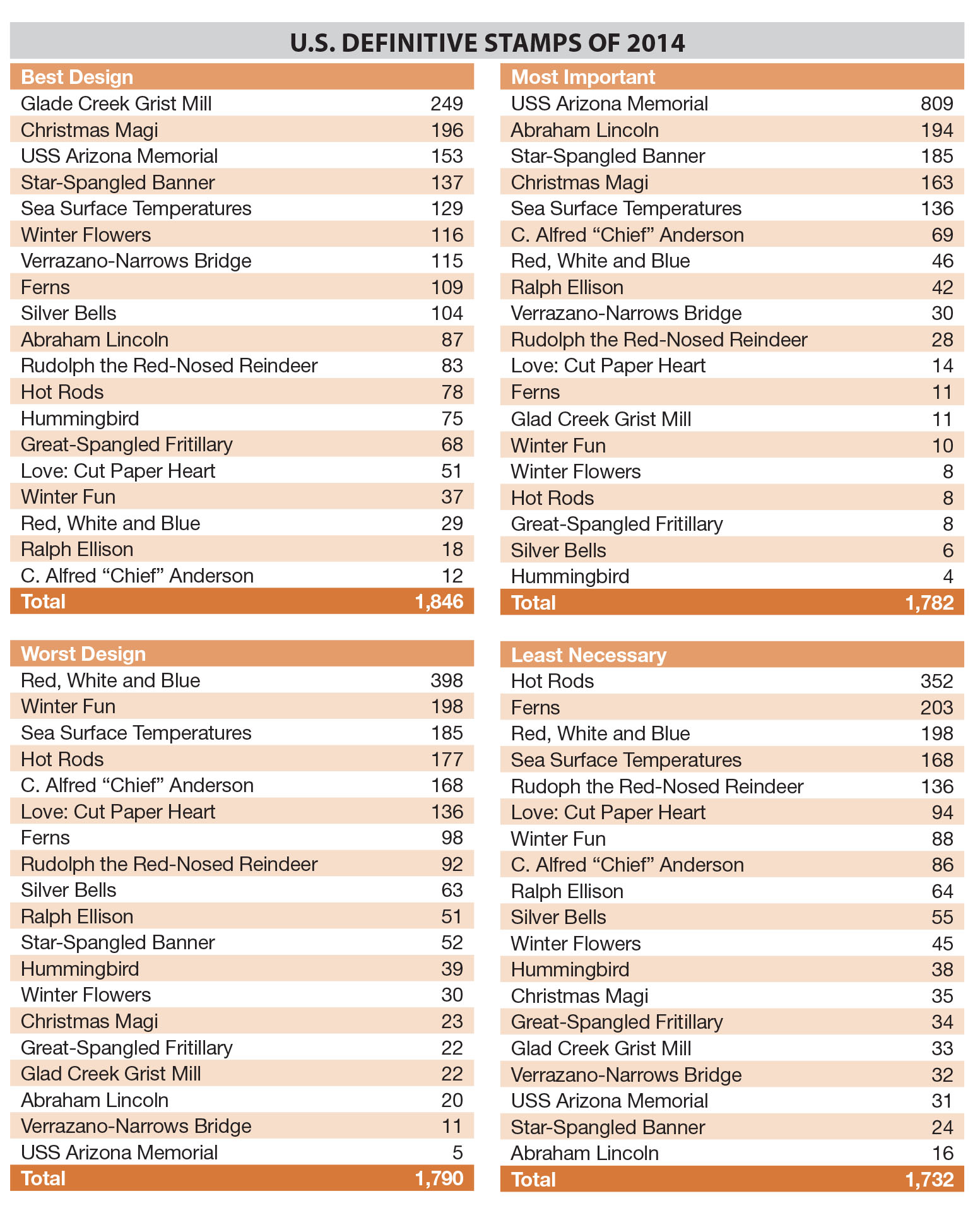 The best design winner among the definitive stamps in 2014 was the $5.75 Glade Creek Grist Mill stamp.

In the recently concluded Linn’s United States Stamp Popularity Poll, the Circus Posters set of eight stamps was chosen as the overall favorite issue of 2014.

Voters also picked the Circus Posters set as the best commemorative stamp design of the year, beating out the Songbirds set of 10 stamps with a comfortable margin.

The Circus Posters stamps received 367 votes as the year’s overall favorite issue, positioning it with a comfortable lead over the Songbirds set with 220 votes, the Hudson River School stamps showing landscape paintings with 131 votes, the War of 1812: Fort McHenry stamps with 121 votes, and the Civil War: 1864 stamps with 114 votes.

The ninth pick, with 83 votes, was the $19.99 USS Arizona Memorial definitive.

About 380 readers voted online this year at Linns.com.

The tables provided with this article list the poll results for the overall favorite and for the three specific categories of commemorative stamps, definitive and special stamps, and postal stationery.

A separate section on the ballot was reserved for the voter’s overall favorite 2014 stamp.

Mail-in ballots and online votes were accepted from mid-December 2014 through early March. The ballot was published weekly in Linn’s during the voting period.

The poll total includes 215 mail-in ballots from children, mostly from school classes and youth stamp clubs. This figure is more than triple the 68 youth ballots received in the 2013 stamp poll.

Youth votes are counted equally with all other votes, but they also are looked at separately by Linn’s editors to gauge how youngsters view the U.S. program.

With 40 votes, the runaway winner for youth overall favorite was the Batman set of eight stamps. The second-place selection, Songbirds, had just half the number of votes as Batman, with 20. Following closely in third place as the youngsters’ favorite was the Winter Flowers stamps.

The Circus Posters set, which ranked tops in the overall voting, did not sit well with younger voters: it came in tied for 16th place with just four votes.

In the general voting, the Circus Posters set placed first as the best-designed commemorative issue, with 483 votes. The Songbirds set was a distant second with 338 votes, and the Farmers Markets issue made a strong showing in third place with 215 votes.

Two issues commemorating historic conflicts gathered two-thirds of the votes in the most important commemorative category.

The commemorative honoring gay rights activist Harvey Milk was named the third most important stamp by Linn’s readers, with 142 votes.

The least necessary commemorative stamps, according to readers, were Harvey Milk with 423 votes, Batman with 347 votes, and the Celebrity Chefs set with 252 votes.

The two stamps honoring music icons Janis Joplin and Jimi Hendrix landed at the top of the 2014 worst design commemorative category, with 471 votes for Joplin and 245 votes for Hendrix. The Shirley Chisholm commemorative received 208 votes to claim the third spot.

Second in the category was the Christmas Magi stamp with 196 votes, and third place with 153 votes went to the USS Arizona Memorial stamp, another issue with a Cosgrove illustration.

The USS Arizona Memorial stamp led the field as the most important stamp, with no other contenders even coming close to its 809 votes. The 21¢ Abraham Lincoln stamp achieved second place with 194 votes.

Linn’s readers are often dismayed by unorthodox renditions of the American Flag, and that was expressed in this year’s poll, as the four Red, White and Blue definitives showing close-up details of billowing flags were picked as the definitive issue with the worst design, with 398 votes.

The second-place issue in the category, Winter Fun, had half as many votes, 198.

The Tree postal card came in second place in all four categories.

As in years past, some Linn’s readers included comments with their ballots, giving reasons for their votes and expressing opinions about the U.S. stamp program in general.

Steven Maginnis wrote that he considered the War of 1812: Fort McHenry stamp more important than the Civil War issue, “not just because the Battle of Fort McHenry inspired our national anthem, but because it was an important battle in a war that has been inappropriately forgotten.”

Maginnis also liked the Abraham Lincoln definitive, noting “the stamp design based on Daniel French’s statue is the most dignified design.”

Mike Clement’s votes matched some of the group winners, when he picked the Circus Posters set as the best designed commemorative and overall favorite, and also chose Red, White and Blue as the worst design for definitives.

“Batman, on the other hand, is the least necessary issue,” Clement wrote, “and eight different [Batman] stamps is overkill!”

Clement liked the design of the Silver Bells global forever stamp enough to call it the best of the definitives, but Linn’s readers weren’t quite as enthusiastic, placing it ninth out of 19 candidates in the definitive category.

THANKS TO THIS YEAR’s PARTICIPANTS

Thanks to all Linn’s readers who participated in this year’s poll. Special thanks go to teachers who distributed ballots to the students in their classes, and to stamp clubs that submitted ballots after distributing them to members during club meetings.

Voting in Linn’s U.S. Stamp Popularity Poll for 2015 is scheduled to begin in December.