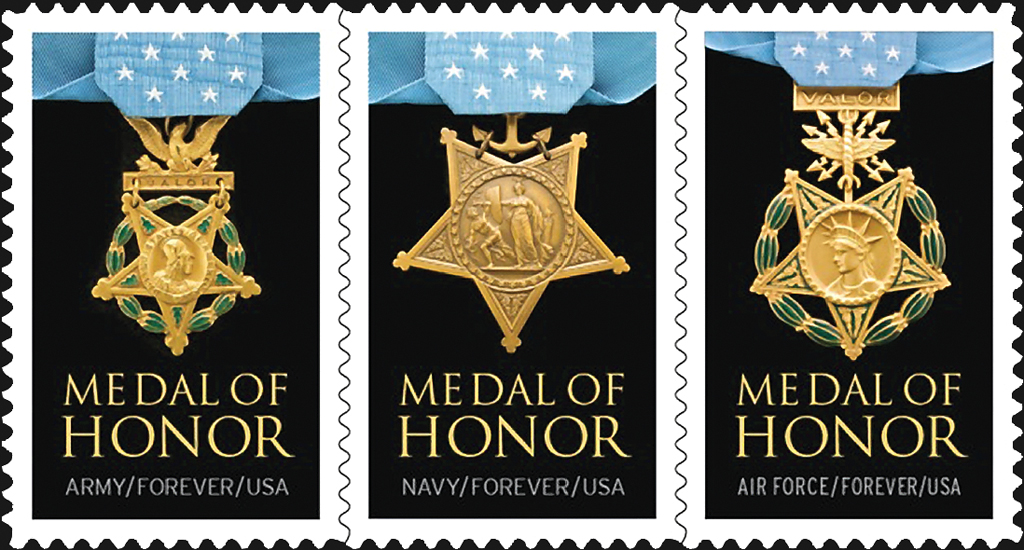 A stamp depicting the U.S. Air Force Medal of Honor, shown at right, is included in the folded pane of 24 stamps that will be issued May 25 during a ceremony at the Vietnam Veterans Memorial in Washington, D.C. The stamps at left and center show the Ar

Three United States forever stamps honoring Medal of Honor recipients from the Vietnam War will be issued May 25 during a first-day ceremony in Washington, D.C.

The 1 p.m. event will take place at the Vietnam Veterans Memorial on the National Mall, 5 Henry Bacon Drive NW (by 22nd and Constitution Boulevard).

These ceremony details were not confirmed by the Postal Service as this issue of Linn’s was going to press, but the date, time and location were updated on the USPS Stamps Facebook page May 7.

The nondenominated (49¢) stamps will be issued in a folded pane of 24 that the Postal Service describes as a “prestige folio.”

The reason for the difference is the addition of a new stamp showing the Medal of Honor awarded to members of the U.S. Air Force.

Because that version of the medal was not established until April 14, 1965, it was not included in the two previous stamp sets, which commemorated honorees from before that date.

The other two stamps, with the same design as those issued previously, are the Medals of Honor for the Army and the Navy (including Marines and Coast Guard).

The new stamps will also show the year date 2015 reading down from the upper right corner. The stamps from the previous sets each bore the year date corresponding to the date of issue.

Each stamp in the new set shows the full medal and part of the ribbon against a black background. Each stamp also reads “Medal of Honor” directly below the medal. Along the bottom is smaller text beginning with the service branch represented by the medal shown: “Army,” “Navy” or “Air Force,” followed by “Forever” and “USA.”

The stamps themselves do not specifically mention the Vietnam War, but the folded pane shows photographs of 48 living recipients of the Medal of Honor from the Vietnam War who agreed to be part of this Postal Service issue.

It also includes “an alphabetical listing of those individuals who agreed to be included and of the deceased Medal of Honor recipients from the Vietnam War,” according to the Postal Service.

A key to identify those pictured is printed on the pane as well.

The photographs surround the stamps on the pane, which are arranged in two blocks of 12 (six across and two down).

The U.S. Department of Defense provides a description of the Medal of Honor on its website for military awards for valor.

“The Medal of Honor is the highest military decoration that may be awarded by the United States government. It is presented by the President of the United States, in the name of Congress, and is conferred only upon members of the United States Armed Forces who distinguish themselves through conspicuous gallantry and intrepidity at the risk of life above and beyond the call of duty:

“While engaged in action against an enemy of the United States;

“While engaged in military operations involving conflict with an opposing foreign force; or

“While serving with friendly foreign forces engaged in an armed conflict against an opposing armed force in which the United States is not a belligerent party.”

As tensions increased between North and South Vietnam, American military advisers were stationed in the South beginning in the 1950s, with combat troops committed in 1965.

As a result of the escalating war and U.S. involvement, several million Americans served in Vietnam until troops were withdrawn in 1973.

The war resulted in more than 58,000 American deaths.

The stamps in the new set and in the previous two issues were designed by Antonio Alcala using photographs by Richard Frasier.