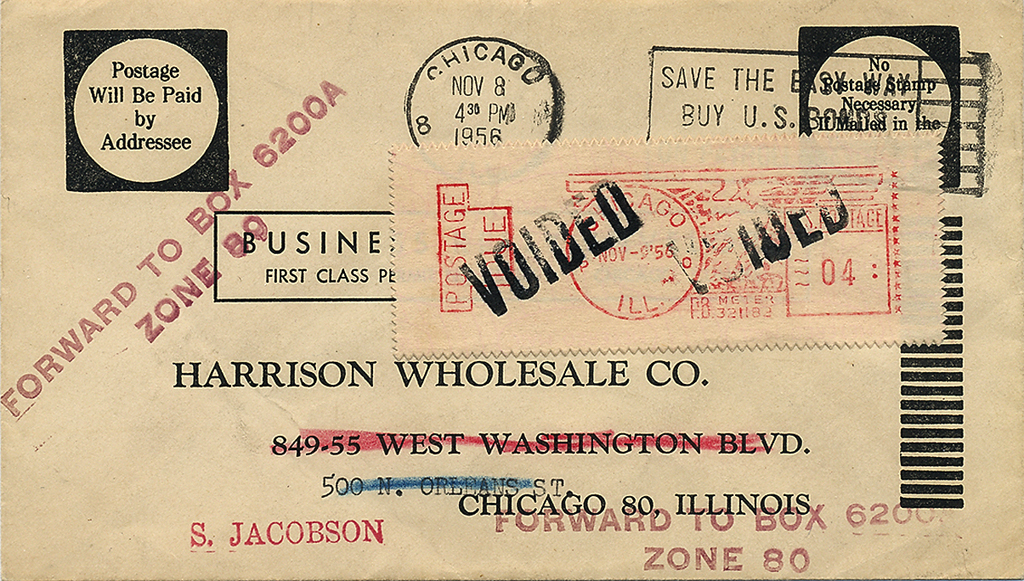 This well-traveled Dec. 18, 1961, third-class item was finally delivered to its third address, where the recipient paid 6¢ postage due, including the 3¢ due for the voided stamp.

However, if postage due stamps were affixed in the expectation that the amount due would be paid and instead the letter was undeliverable, forwarded or treated as dead mail, the postal worker had to obtain credit for these unreimbursed stamps.

This crediting process was complicated and is described in a number of official postal documents, including various Postal Laws and Regulations of the United States of America.

As of July 1, 1956 (see Postal Bulletin 19952, June 7, 1956), the procedure changed radically. From that date, canceled postage due stamps affixed to mail that was forwarded or returned or treated as dead mail were to be “voided,” and the postage due clerk had to claim the value of the postage due stamps for purposes of reimbursing his fixed credit.

This voiding and the method of claiming the value of the postage due stamps were new processes.

After the stamps had been voided in this way, the mail was to be released for dispatch in the regular manner, marked for forwarding or return. Dead mail was handled as prescribed by Section 346.2 of the PL&R.

The voided postage-due process is demonstrated by the Dec. 18, 1961, third-class item in the first illustration. The piece was prepaid at the up-to-two-ounce domestic single-piece rate of 3¢ with the 3¢ Liberty stamp (Scott 1054) of the 1954 Liberty series.

It was then forwarded the first time, due 3¢ at the single-piece third-class rate for forwarding third-class matter, paid by the 3¢ postage due stamp (Scott J68).

The item was undeliverable at the first forwarding address, and was further forwarded to yet a third address. As per the new regulation, the 3¢ postage due stamp was marked “VOIDED.”

It is unclear to me what happened next, because the envelope was apparently forwarded locally to Box 6002A in Zone 80 (that is, possibly to the same postmaster who would eventually claim credit for the postage due stamp). Therefore, it seems possible to me that voiding of the postage due stamps was not required in this case.

It is possible that the postmaster realized this after the forwarding took place, which was why no new 4¢ postage due stamp was placed on the envelope.