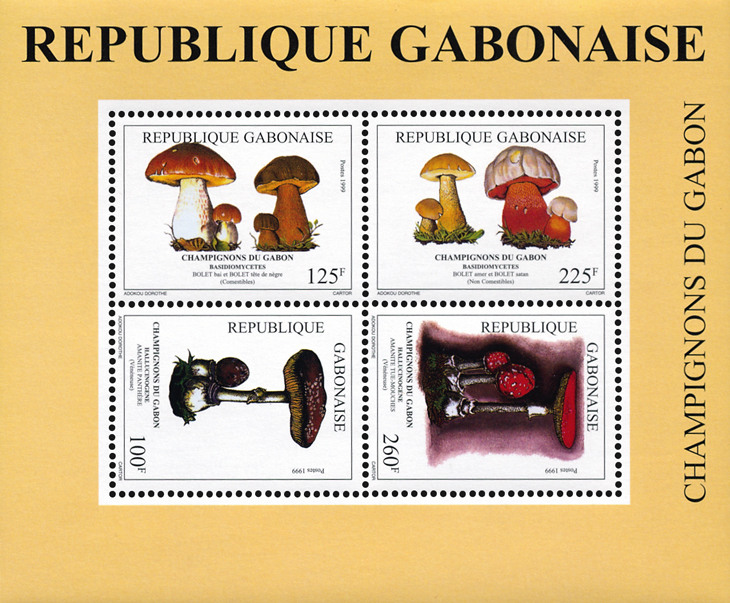 Gabon’s 1999 souvenir sheet of four Mushroom stamps (Scott 951De) is in demand and is a good buy in mint never-hinged condition in the $75-to-$100 price range. The sheet is not valued in the Scott Standard catalog.

Fungus on stamps can be a real problem, unless we are talking about a fungi topical collection. As with pizza lovers, mushrooms are a popular topping with topical stamp collectors.

Gabon lies on the equator on the west coast of Africa at the Gulf of Guinea. A French colony until gaining its independence in 1960, Gabon is one of the most stable and prosperous countries in sub-Saharan Africa.

Gabon has been a prolific issuer of postage stamps since gaining its independence.

Most of its stamps are attractively designed and executed with high production values. Gabon’s many colorful issues on a wide range of interesting subjects are popular with many topical collectors.

On April 30, 1999, Gabon issued a set of four Mushroom stamps (Scott 951A-951D) and a souvenir sheet of four (951De). The stamp set is readily available and inexpensive, but the souvenir sheet is uncommon and difficult to find.

The souvenir sheet, which is not valued in the 2016 Scott Standard Postage Stamp Catalogue, is currently selling in the $75-to-$100 price range in mint never-hinged condition, with no shortage of buyers.