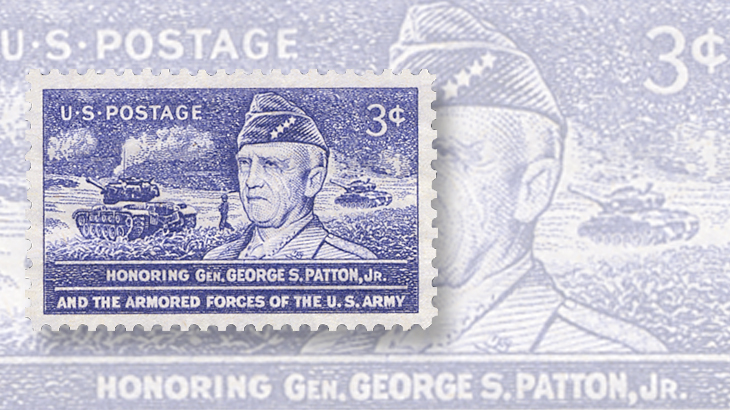 A 3¢ stamp issued in 1953 on George S. Patton's birthday, Nov. 11, honored the general and the armored forces that he helped establish.

Gen. George S. Patton Jr. was born Nov. 11, 1885, in San Gabriel, Calif., as part of a family with a rich military history. His ancestors included Gen. Hugh Mercer, who was killed during the American Revolution at the 1777 Battle of Princeton, and Patton’s grandfather, Confederate Col. George Smith Patton, who was killed at the 1864 Third Battle of Winchester in Virginia.

Patton attended Virginia Military Institute before entering the United States Military Academy at West Point. He graduated in 1909 and was commissioned as a second lieutenant in the 15th cavalry regiment.

At the 1912 Olympic Summer Games in Stockholm, Sweden, Patton competed in the pentathlon, placing fifth.

While stationed in Texas in 1916, as an aide to Gen. John J. Pershing, Patton took part in the expedition into Mexico against Pancho Villa. He served Pershing again in World War I in the American Expeditionary Forces.

Patton was instrumental in the formation of the Armored Force in 1940 and commanded the Western Task Force in North Africa during World War II. He commanded the Seventh U.S. Army in the 1943 invasion of Sicily and headed the Third Army’s sweep across France and its fierce attack against German forces at the Battle of the Bulge.

Patton died Dec. 21, 1945, 12 days after an automobile accident in Germany that left him paralyzed.