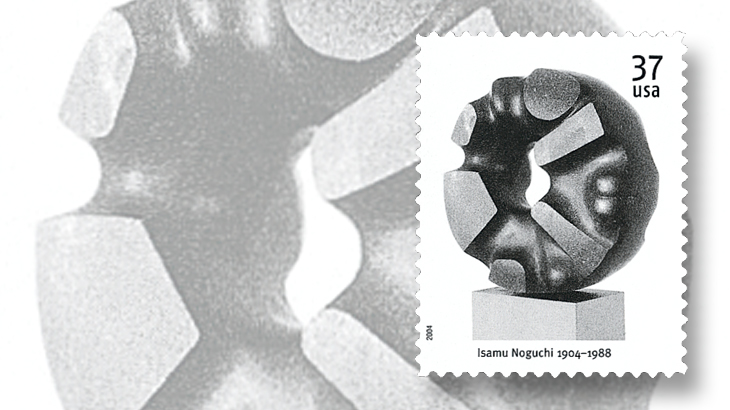 The sculpture Black Sun is featured on one of five stamps issued in 2004 to honor American artist Isamu Noguchi.

American artist Isamu Noguchi was born Isamu Gilmour in Los Angeles, Calif., on Nov. 17, 1904. His mother, Leonie Gilmour, was an American teacher and editor, and his father, Yone Noguchi, was a Japanese poet and writer. His younger sister, Ailes Gilmour, was a modern dancer.

As a youngster, Noguchi lived in Japan for several years before returning to the United States in 1918 to attend boarding school in Indiana. After enrolling in the pre-med program at Columbia University, Noguchi became involved with the art of sculpture, and exhibited at the National Academy of Design and the Pennsylvania Academy of Fine Arts.

In announcing a set of five different 37¢ stamps celebrating the art of Isamu Noguchi, the United States Postal Service wrote, “Throughout his career, Noguchi strived to expand the role of the sculptor. In addition to working with an extremely imaginative range of materials — including wood, stone, marble, steel, bamboo, paper and even water — he also created works on an ever-increasing scale, including gardens that were inspired by Japanese tradition, but clearly marked by Western influence.”

The stamps were issued during Noguchi’s birth centenary year on May 18, 2004.