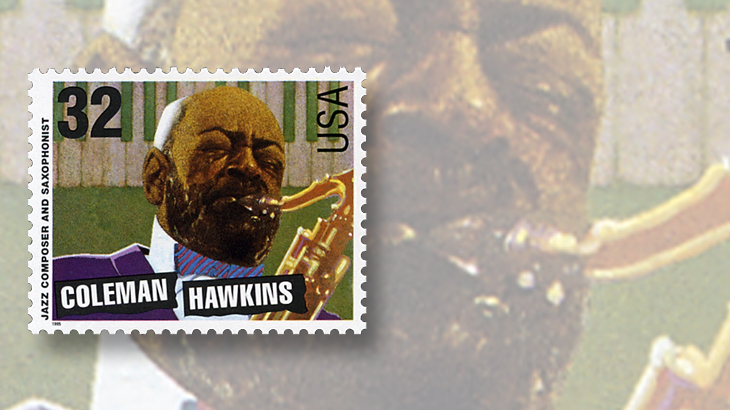 The 32¢ Coleman Hawkins commemorative is one of 10 stamps in the 1995 Jazz musicians set.

American tenor saxophonist Coleman Hawkins, a key figure in the development of modern jazz, was born Nov. 21, 1904, in St. Joseph, Mo. His mother was a schoolteacher, and she taught Coleman to play the piano at age five. He also learned to play cello, and when he was nine he was given a tenor saxophone for his birthday.

He began playing saxophone in Chicago clubs while he was still in his teens, recording with Mamie Smith and Her Jazz Hounds and relocating to New York City.

He spent 10 years as a member of Fletcher Henderson’s orchestra, often performing at New York’s popular Roseland Ballroom, before leaving the group to strike out on his own, playing with support from various local bands.

“Coleman Hawkins was the first artist to move the tenor saxophone from the reed section to the status of a solo instrument in jazz,” the United States Postal Service wrote when the 32¢ Coleman Hawkins stamp (Scott 2983) was issued Sept. 1, 1995. The stamp is in the Jazz Musicians set of the Legends of American Music series.

Hawkins toured Europe in the 1930s, returning to New York in 1939. It was then that he recorded his improvisational rendition of Body and Soul, which the Library of Congress entered into the National Recording Registry in 2004.

Hawkins also is celebrated for his 1944 recording sessions that ushered in the bebop era of jazz.