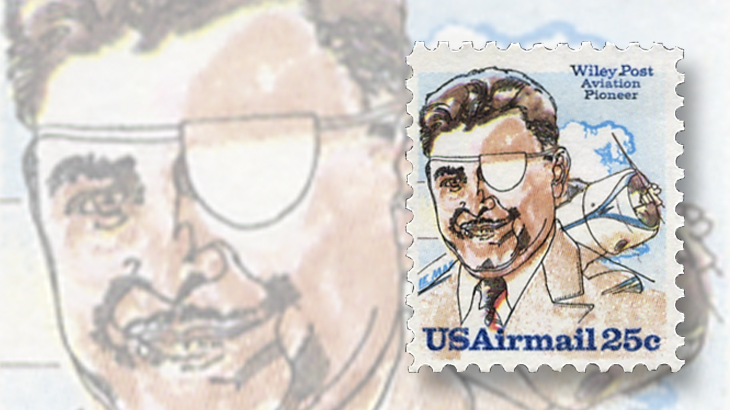 Aviation pioneer Wiley Post is shown on one of the two 25¢ airmail stamps issued to honor him in 1979.

American aviation pioneer Wiley Post was born near Grand Saline, Texas, on Nov. 22, 1898, and was raised on a farm in Oklahoma.

After seeing an airplane for the first time at a county fair, Post took a seven-month course at Sweeney Auto School in Kansas City and found work with a construction company. He also was hired as a parachutist, jumping out of a Curtiss Jenny airplane to entertain visitors to the flying circus.

Working at an oil field at age 28, Post suffered a severe eye injury that required surgically removing the left eye. He received workman’s compensation for the injury, and used the money to buy a used airplane and embark on a barnstorming career.

In 1927, Post was hired as an executive pilot for Oklahoma oilman F.C. Hall, and in 1930 began flying Hall’s new Vega plane, named Winnie Mae, in air races and competitions.

In 1931, Post set a speed record flying around the world with navigator Harold Gatty; two years later he repeated the feat by himself using an autopilot.

Post also explored high-altitude flight possibilities in a pressurized suit that he helped to develop.

In 1935, Post and his friend Will Rogers, the famous writer and entertainer, flew into Alaska while surveying possible air routes. The plane they were flying in crashed in a lagoon near Point Barrow, Alaska, and both men were killed.

The United States Postal Service issued two 25¢ airmail stamps in 1979 to honor Wiley Post. One stamp shows Post with Winnie Mae behind him (Scott C95), and the other shows Post seated in his pressurized suit, along with a second portrait and another view of the airplane (C96).