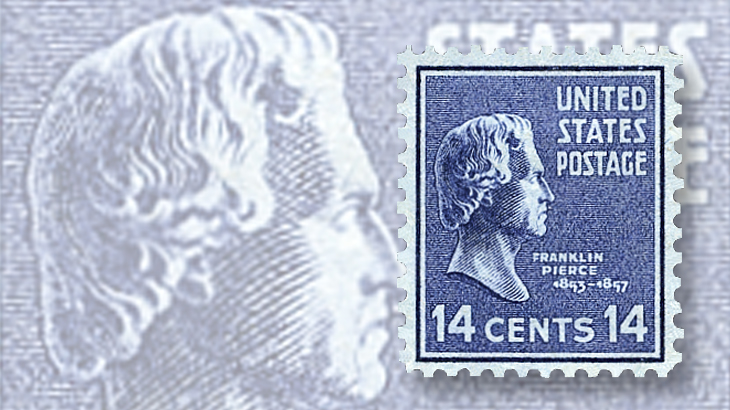 Franklin Pierce, the 14th president of the United States, is honored on the 14¢ stamp in the 1938 Presidential series.

Born Nov. 23, 1804, in Hillsborough, N.H., Franklin Pierce would become the 14th president of the United States in 1853, during a precarious time that eventually led the nation to Civil War.

Pierce’s signing of the 1854 Kansas-Nebraska Act, which repealed the Missouri Compromise and opened the door for the possible expansion of slavery in Western territories, intensified divisions in the country and resulted in violent conflicts among new settlers with opposing views.

Pierce came to the presidency after serving in the U.S. House of Representatives and, for a brief while, in the U.S. Senate. He was a successful attorney and a hero of the Mexican-American War, but his wife was chronically unwell, and their three sons all died at young ages.

Pierce, a Democrat, served just one term as president and was not nominated by his party for a second. He retired to New Hampshire, and died there in 1869.

Pierce never appeared on a U.S. stamp until nearly seven decades after his death, when the 1938 Presidential definitive series included one stamp for each deceased president at the time of issue.

When the 1986 Ameripex Presidential issue similarly honored all of the nation’s past chief executives on 22¢ stamps, Pierce made his only other stamp appearance (Scott 2217e).