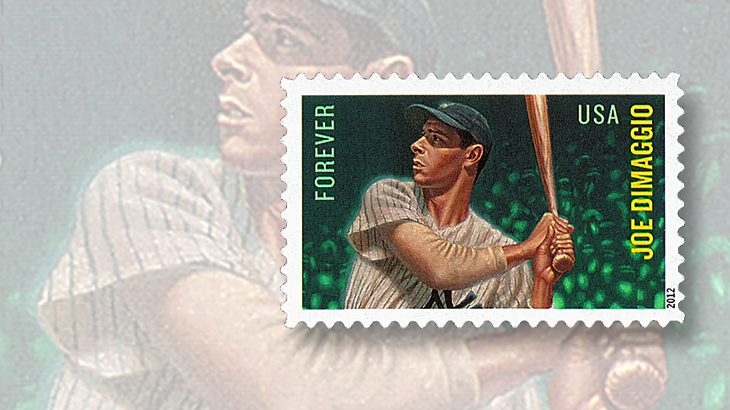 The Yankee Clipper, Joe Dimaggio, was honored on a forever stamp issued July 20, 2012

The man known as “The Yankee Clipper,” baseball legend Joe DiMaggio, was born Nov. 25, 1914, in Martinez, Calif. He was the eighth of nine children; his older brother Vince and his younger brother Dom were also professional baseball players.

As a youngster, Joe DiMaggio played baseball in the Boys Club League and later joined the San Francisco Seals, a minor-league team that also included Vince on the roster.

Joe was signed to the New York Yankees in 1934 but didn’t make his major league debut until May 3, 1936. He became the team’s regular center fielder, and was admired by fans for his hot bat, and his graceful play and speed in the outfield.

In 1941, DiMaggio began a hitting streak that would extend to 56 games, shattering all existing records, and never surpassed in more than 70 years. He led the New York Yankees to nine World Series championships and played in 11 All-Star Games. He was named the American League’s Most Valuable Player three times: in 1939, 1941 and 1947.

DiMaggio enlisted in the U.S. Army during World War II and served as an athletic instructor stateside, missing three seasons of Major League ball. He married actress Dorothy Arnold in 1939; they divorced four years later. He ended his playing days in 1951, and married actress Marilyn Monroe in 1954. They divorced after nine months.

DiMaggio is looked upon as one of baseball’s elite players, a member of the National Baseball Hall of Fame. He retired with a career batting average of .325, and with 361 home runs to his credit.