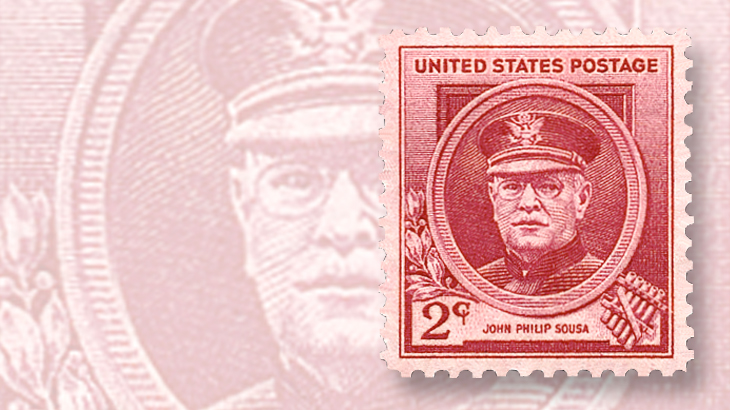 The well-known composer and conductor John Philip Sousa, known as the March King, on a 2¢ stamp in the Famous Americans series.

The man known as the March King, John Philip Sousa, was born Nov. 6, 1854, in Washington, D.C. His father, John Antonio Sousa, was a member of the United States Marine Band, and 13-year-old John Philip, who had been studying music for seven years, was enlisted as an apprentice musician in the band in 1868.

Sousa began composing music during his teens. After an honorable discharge from the Marines in 1874, he served as the conductor at the Washington D.C. opera house, and played first violin with the 1876 Centennial Exposition orchestra in Philadelphia, which was conducted by the esteemed Parisian composer Jacques Offenbach.

With a rising public profile as a musician, conductor and composer, Sousa was appointed as the leader of the U.S. Marine Band in 1880. He completed The Washington Post March in 1889, and initiated the band’s first tour in 1891.

He resigned his position the following year to form his own new Sousa Band. The new group toured extensively, including a performance at the World’s Columbian Exposition in 1893, which brought tremendous public exposure to both Sousa and the new musical group.

Sousa composed some of the world’s most famous marches during this period, including The Stars and Stripes Forever, completed in 1897. He continued to tour and perform for many years thereafter, until his death March 6, 1932, at age 77.

A 2¢ stamp honoring John Philip Sousa was issued May 3, 1940, in the American Composers set of the Famous Americans series (Scott 880).

A 32¢ stamp showing the American flag and a uniformed trumpet player with the inscription “The Stars and Stripes Forever!” was issued Aug. 21, 1997, in honor of the 100th anniversary of the world famous march.