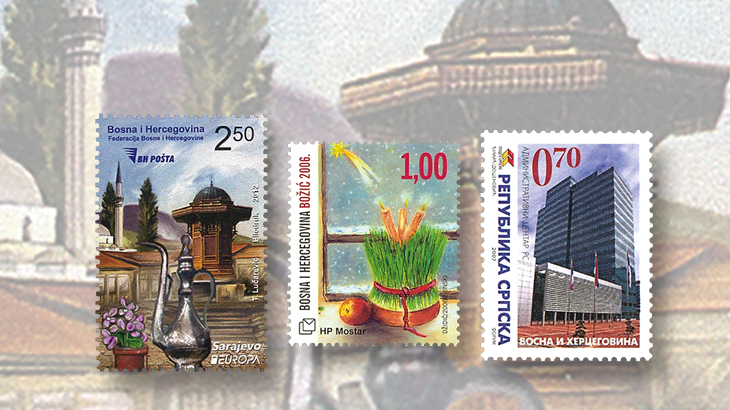 In a recent letter to the editor, reader Richard L. Reese asks why Linn’s senior editor Denise McCarty referred to a stamp-issuing area of Bosnia and Herzegovina as the Muslim government. He asks if there is “anti-Muslim sentiment in the stamp community” because Linn’s doesn’t mention the religious affiliation of any other country in reporting on their stamps.

Located in southwestern Yugoslavia, the regions of Bosnia and Herzegovina were a hotbed of political strife for centuries. The provinces were ruled by the Ottoman Turkish Empire until 1878, when they were placed under Austria-Hungary control.

Bosnia and Herzegovina issued its first stamps a year later, in 1879.

In 1908, Austria-Hungary annexed Bosnia-Herzegovina, sparking tension with the Serbian nationalists, whose goal it was to annex the region to Serbia.

In 1914, a Serbian nationalist assassinated Austrian Archduke Ferdinand, heir to the Austrian throne, in Bosnia. The assassination led to the outbreak of World War I.

Following the war, Bosnia and Herzegovina became part of the newly formed Kingdom of Yugoslavia.

The war resulted in a strengthening of the ethnic and religious tensions in Bosnia and Herzegovina among the Croats, Serbs and Muslim Bosnians, today referred to as Bosniaks.

In 1991, the Bosnia and Herzegovina parliament declared independence. Civil war broke out with the Croat and Muslim factions, backed by NATO and Croatia, fighting against the Serb-dominated Yugoslav army. The army targeted the Croats and Muslims in an ethnic cleansing that resulted in thousands of deaths among non-Serb minorities and the displacement of millions.

On Nov. 21, 1995, during the Dayton Accords, a peace agreement was signed by the presidents of Bosnia, Croatia, and Serbia at Wright Patterson Air Force Base on the outskirts of Dayton, Ohio (just a short drive southeast from Sidney, Ohio, where the offices of Linn’s are located). The accords outlined a general agreement for peace in Bosnia and Herzegovina.

Former President Bill Clinton traveled to Dayton Nov. 21 of this year to participate in the celebration of the 20th anniversary of the Dayton Accords at the University of Dayton.

The presidency of Bosnia and Herzegovina rotates every eight months among three members of the presidency (one Bosniak, one Croat and one Serb).

Because of the lengthy civil war and the unsettled status of mail delivery in the region, the Scott editors were reluctant to list the stamps of Bosnia and Herzegovina from 1993 until the 2001 edition of the Scott Standard Postage Stamp Catalogue.

Since June 22, 1998, the stamps of the three regions are denominated in pfennig and marks.

Will the three ethnic groups cease issuing their own stamps in the future? Time will tell. Stamps are a convenient way to promote ethnic pride.