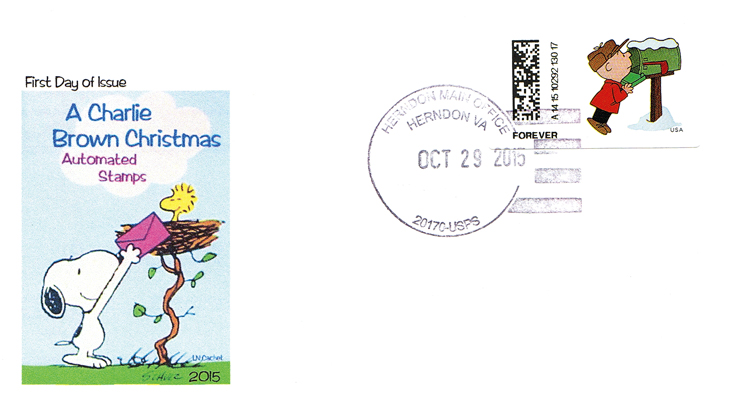 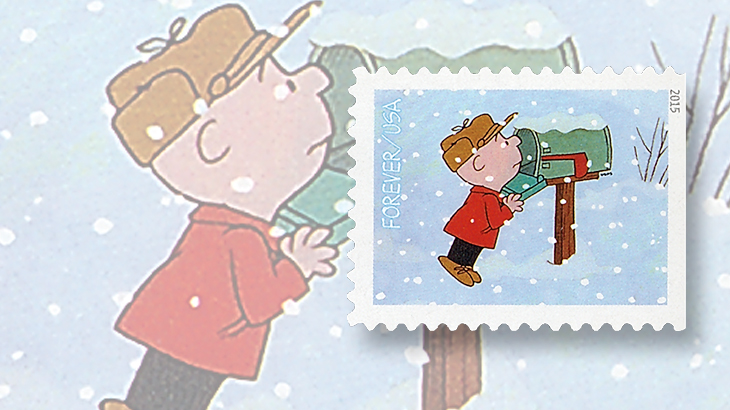 The design of the new computer vended stamp is very similar to the design of this forever stamp from the A Charlie Brown Christmas set issued Oct. 1.
Previous
Next

The design of the forever stamp shows Charlie, from the popular Peanuts comic strip by Charles M. Schulz, standing on his tiptoes and peering into an apparently empty mailbox, with snow on the top of the mailbox and at the base.

The design is very similar to one stamp from the set of 10 different A Charlie Brown Christmas forever stamps issued Oct. 1.

That postage stamp (Scott 5026) shows more background design and has snowflakes falling from the sky.

Philatelic researcher Len Nadybal identified Oct. 29 as the day the computer vended stamps with the Charlie Brown design were placed on sale in the Washington, D.C., area. Nadybal commemorated the release with a homemade cacheted cover postmarked in Herndon, Va., on that date.

He also came upon error stamps being issued by one machine, with the U.S. Postal Service’s black eagle logo printing over the preprinted Charlie Brown design. The machine malfunction has since been corrected, Nadybal told Linn’s Stamp News.

This type of mistake occurs when the internal controls on the kiosk machine are set to print on blank labels, but the machine is filled with preprinted labels.

Computer vended labels with a holiday theme have been produced each year since 2012, when a mailbox filled with wrapped packages served as the theme (Scott CVP88). The label designs have corresponded to previously issued postage stamp designs each year.

The computer vended postage stamps are listed in the Scott Specialized Catalogue of United States Stamps and Covers.