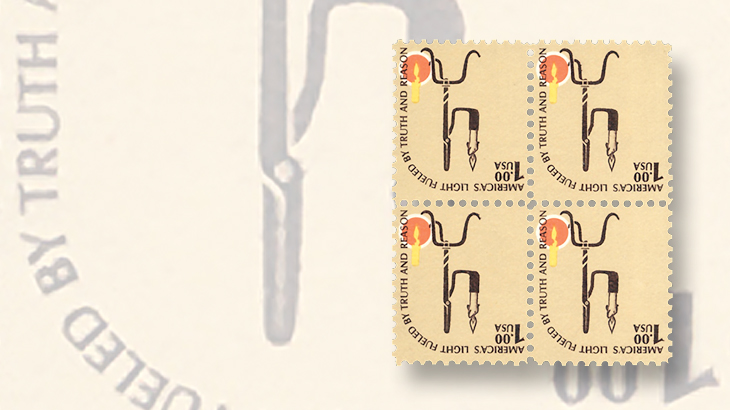 Among the United States items offered in the Dec. 1-3 auctions by Cherrystone is this block of four of the 1979 $1 Candleholder stamp with brown inverted, an error known as the CIA invert. 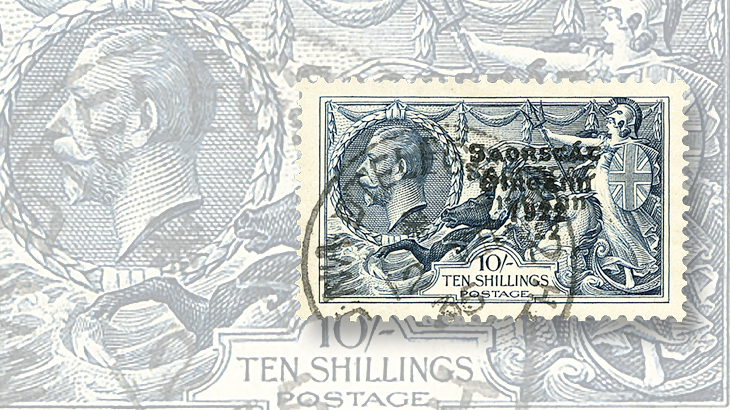 Ten 10-shilling stamps from the 1935 overprinted set are known with the Irish Free State overprint doubled. This postally used example will be offered in the upcoming Cherrystone auction. 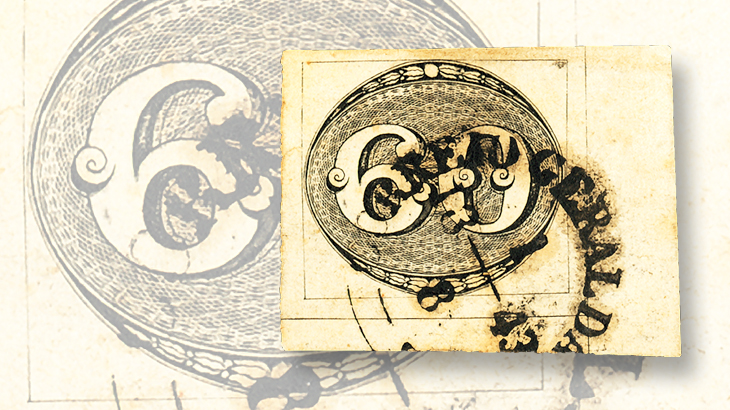 An intermediate impression of Brazil’s 1843 60-reis Bull’s Eye stamp, postmarked on the first day of issue, Aug. 1, 1843. The stamp is part of Cherrystone’s auction of specialized classic Brazil.
Previous
Next

Cherrystone Auctions of New York City will present three sales Dec. 1-3, offering United States and worldwide stamps and covers, the John Pedneault collection of Ireland, and specialized Brazil from 1843 to 1893.

Cherrystone notes that “only a handful of never-hinged examples” have been recorded. The mint stamp has full margins on all four sides and is offered with an estimated net realization of $20,000.

Additional classic-era U.S. stamps, covers and proofs are offered in the first sale.

Another seldom-seen never-hinged item turns up from the modern end of United States philatelic history: a block of four of the 1979 $1 Candleholder stamp with the engraved brown inverted — the so-called CIA invert, originally purchased in 1985 for use as postage by employees of the Central Intelligence Agency.

Only 95 invert stamps are known from the original find, including just three blocks of four.

The 2016 Scott Specialized Catalogue of United States Stamps and Covers values a single $1 invert (Scott 1610c) at $17,500. Cherrystone provides an estimate of $57,500 for this block of four described as grading very fine.

The auction presents a nice variety of worldwide material, strong in Germany and German areas, British Commonwealth, Italy and colonies, Russia and more, plus large lots and accumulations.

The John Pedneault collection of Ireland offered Dec. 3 at 10 a.m. consists of single stamps, multiples and postal history of Ireland from 1922 through the 1935 overprints (Scott 1-95, though the focus is very much on the overprinted issues). Also included are a number of collections and large lots generally from the same era.

The great range of material from the 1922 issues showcases many important varieties, including the different die types and variations among the overprints, with inverts, missing accents and so on, as well as proofs and postal history.

These early items represent some 200 lots in this specialized sale, but there are also some treats among the issues that followed.

An appealing rarity is the 1935 10-shilling indigo stamp with doubled Irish Free State overprint on the re-engraved stamp from Waterlow (a variety of Scott 95 listed in the Stanley Gibbons catalog as 101b). The used stamp in this sale has a clean circular cancel, and the doubling of the overprint is easily seen.

“Only 10 (fourth vertical row of one sheet) printed,” Cherrystone notes. This example is offered with an estimate of $2,500 against the Stanley Gibbons catalog value of £4,000 (a little more than $6,000).

Cherrystone’s Dec. 3 auction of specialized Brazil from 1843 to 1893 opens Thursday afternoon with two lots that actually reach back a few more years in the country’s philatelic past.

The first offers 25 folded letters dating from 1813 to 1843, with a variety of town and other markings, and representing a number of different rates.

What follows is close to 50 lots of Brazil’s 1843 Bull’s Eyes stamps: the 30-reis, 60r and 90r black numeral stamps (Scott 1-3) that are the first national issues from the Americas.

The offerings include unused and postally used stamps, examples on cover, singles and multiples.

One special example is a used single of the 60r intermediate impression on thick yellowish paper (Scott 2a) with a clear, full strike of the rimless “Correio Geral da Corte 1/8/1843” postmark, representing the first day of issue (Aug. 1) for these very famous stamps.

The stamp is from the second composite plate, state A, position 18, which Cherrystone describes as a “lower right sheet corner margin single, with full marginal rules at right and at bottom.”

The stamp (ex-Norman Hubbard collection) is described as having a few minor imperfections, including slight toning and a small tear in the left margin.

It is signed by Diena, Bolaffi and Roger Calves, and offered with a 1986 Diena certificate and a 2015 Brian Moorhouse certificate.

Cherrystone notes that approximately five to six examples of the Bull’s Eyes canceled on the first day are known, none on cover.

A folded letter franked with a horizontal strip of three of the 60r stamp is also featured in this sale. The stamps are affixed to the back of a folded letter to Santa Barbara, Minas Geraes, and tied with two strikes of a double-ring “Correio Geral Da Corte 21 Oct 44” circular date stamp. Cherrystone identifies the franking as paying five times the overland letter rate.