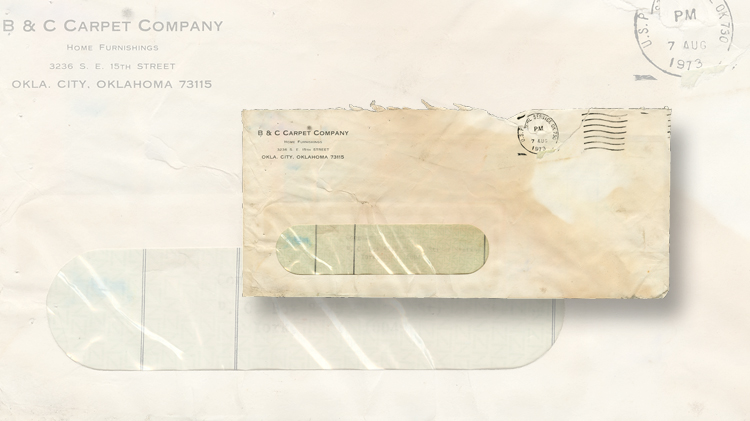 This ratty-looking envelope was water damaged when the plane carrying it blew a hatch over Chesapeake Bay, spilling mail into the water. It was sent on to its destination by the post office in Oklahoma City, where the mailing had originated, with a notice

Google has failed me. It doesn’t happen often, but I tried to find details to explain a printed notice from the post office included with the damaged mail cover shown nearby, but I found no answers.

The notice sent in an uncanceled “official business” U.S. post office envelope reads: “The enclosed article was damaged by water when a hatch blew open over Chesapeake Bay while this mail was in custody of the Air Lines (Flight BN-104, Denver to New York via Oklahoma City and Dulles). A lot of mail was recovered floating in the water — out of the mail sacks.”

It is signed by B.L. Dudley, postmaster of the Oklahoma City post office.

The notice is not dated, but the cancellation date on the damaged envelope is Aug. 7, 1973, and the receipt date on the back of the post office envelope is November of the same year.

Another curiosity regarding this mailing is that the damaged mail was returned to its point of origin, Oklahoma City, for processing rather than being sent on to the addressee in New York City.

That would make sense if the address were unreadable and it had to be ascertained from the mailer, but that does not seem to be the case. Any Linn’s reader who has any information on Flight BN-104 and its blown hatch is welcome to contact me by e-mail at jmhstamp@verizon.net or by writing to me at Box 1125, Falls Church, VA 22041-0125.