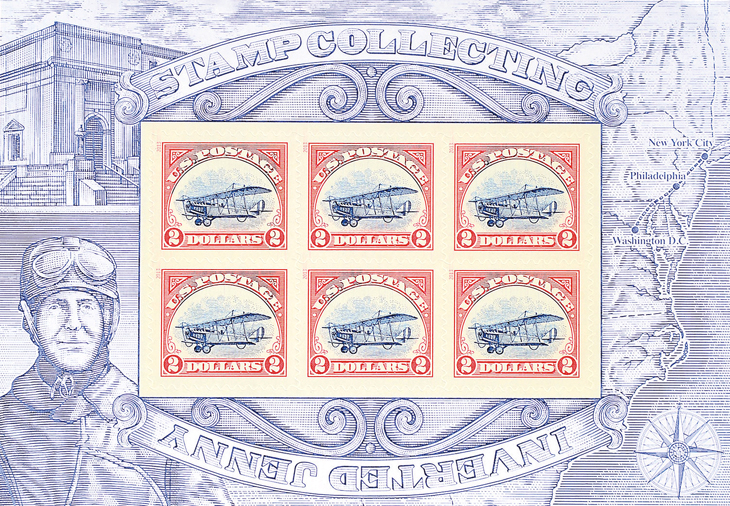 The most recent find of a scarce upright variety of the $2 Jenny Invert pane of six was purchased in a Maine post office. The U.S. Postal Service intentionally created 100 panes of the upright variety. Photograph courtesy of James D. Julia Auctioneers, Fairfield, Maine, USA, www.jamesdjulia.com. 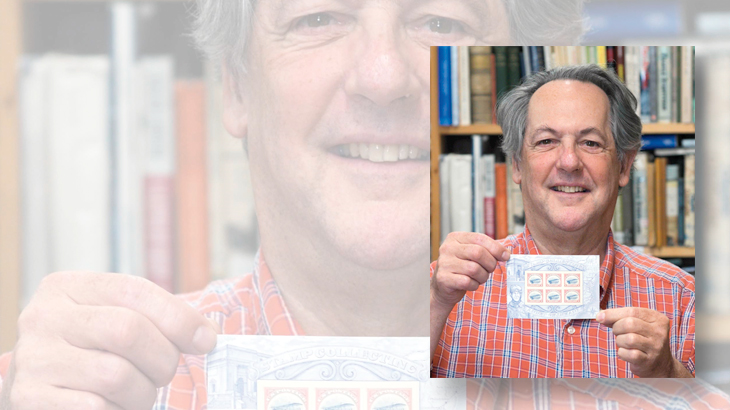 Robert Sezak holds his pane of the upright variety of the $2 Jenny Invert stamp. Sezak bought the pane in mid-September and has consigned it to an auction taking place in February 2016.
Previous
Next

A used book dealer in Waterville, Maine, is the most recent lucky purchaser of the upright variety of the 2013 Jenny Invert pane of six $2 stamps (Scott 4806d).

He buys all of his stamps locally, Sezak told Linn’s Stamp News. The pane of the upright variety was among a purchase of 25 panes he made in mid-September.

He’s not sure how many panes of the Jenny Invert stamps he’s bought altogether.

“I currently have 80 sheets and have used approximately 40 sheets,” Sezak said.

Although he’s not a stamp collector, Sezak learned about the upright Jenny Invert variety after seeing a notice in the post office and discussing the issue with a postal clerk.

As a promotional scheme, the United States Postal Service intentionally created 100 panes of the upright variety of the 2013 $2 Jenny Invert issue (Scott 4806).

Sezak followed the instructions on the special insert card that came with the stamps and contacted the Postal Service about his find. He was mailed a “certificate of acknowledgement” numbered 24 out of 100 and signed by Postmaster General Megan Brennan.

The certificate was accompanied by a congratulatory letter from USPS acting director of Stamp Services Mary-Anne Penner dated Sept. 24, 2015.

The numbering of Sezak’s certificate indicates that two other stamp panes have been found and reported to the Postal Service since Linn’s most recent report of a find by Oklahoma stamp collector Steve Blair, who received a certificate numbered 21 of 100 (Linn’s, Oct. 5, page 10).

Sezak was very happy to find the upright variety, but it’s no longer in his possession.

The intact stamp pane has been consigned to the James D. Julia auction firm in Fairfield, Maine, and is scheduled to be sold during its Fine Art, Antiques and Asian auction to be conducted Feb. 3-5, 2016.

Linn’s unofficial tally of the upright variety panes recorded now stands at 27. It includes examples certified by philatelic grading services but not reported to the Postal Service. It also counts three panes randomly given away at the end of 2014 to three different USPS mail-order customers. That giveaway was later described by the Postal Service as not having been fully approved before it took place.

Calculating the full print run of more than 2.2 million panes and adjusting for an estimated number of panes set aside by the Postal Service for archive and merchandising purposes, the likelihood of purchasing one of the 100 panes with the intentional variety is estimated by Linn’s to be approximately 1 in 19,000.