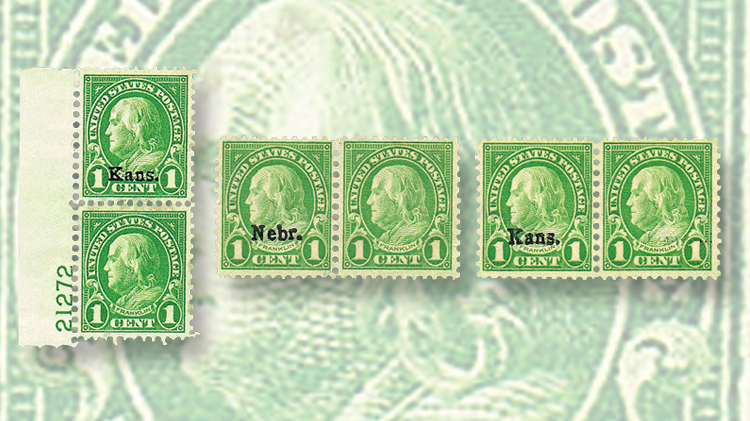 These three purported errors — pairs on which one “Kans.” or “Nebr.” overprint seems to be missing — are all fakes. But they are close enough to genuine that many could be fooled; even if looking at references on fakes of these issues.

Austrian philatelist and philatelic author Edwin Mueller (1898-1962) once wrote: “ … Only decades of experience and knowledge far above even that of an advanced collector enable the expert to do his job.

Some collectors think they can expertize themselves, when they buy literature about forgeries, which explains or pictures characteristics of genuine and forged stamps.

“We have always considered the publication of such books about forgeries as somewhat misleading, as they give some collectors the illusion that they themselves can expertise when they merely check their stamps against the pictures in a book.

“But expertizing is not so easy and such literature lulls the collector only in a false sense of security. The forgers know the ‘marks of genuineness’ themselves, and they like the publication of books, describing them accurately, as they help them to improve their product.

“The naive collector, who thinks that he can expertize his stamps with the help of a book he bought for a few dollars, will finally find out that he has been the biggest sucker for new improved forgeries and others not described in his book.”

Without question there is truth in this opinion, and yet experts and non-experts alike can use reference works to rule out some candidates that have known counterfeit aspects, or that do not have known genuine characteristics. Where the problem lies is in taking the next step and declaring an item genuine based on such literature.

The item may be genuine, but to say that it is without question requires the services of an expertizing committee.

Fakery in philately is something like a game of leapfrog. New information about newly discovered fakes finds its way to the public, including those producing the fakes. This results in better quality fakes, which when discovered leads to new information, and the cycle begins again.

So experts and non-experts need to pay attention to how recent the references they are using are — and how thorough as well. And experts, much like the forgers, need to put significant dollars and time into staying current with the broad swath of philatelic literature that covers their area or areas.

I have spoken of the legendary United States expert George Brett in this column before. When he was presented the Alfred F. Lichtenstein Medal by the Collectors’ Club of New York in 1983, he spoke about the need for experts to be open to new information:

“Of course to be honest I’m always forgetting things and having to relearn them too, so the statement that I’ve forgotten more than I know is also true … ”

Need I mention that a sense of humility is a good attribute for an expert? As inventor Charles Kettering once wrote, “It ain’t the things you don’t know that get you in trouble. It’s the things you know for sure that just ain’t so!”

With this as background, I want to recommend a resource equally applicable for experts and the rest of us. It is an online tome titled Index of Literature in the English Language that Describes Postal Stamp Forgeries, Fakes, Reprints, Fraudulent Postal Markings and Other Obliterations, and Bibliography by Theodore M. Tedesco, edited and published by the American Philatelic Research Library in May 2014.

It can be found on the American Philatelic Society website. It also is available for downloading, though its almost 1,100 pages make that a monumental job. You also can print out any pages that interests you.

Following seven pages of introduction are about 50 pages of references for U.S. and possessions material, and the rest is references for all other countries, in alphabetical order, and helpful appendices.

This work is an index, not the indexed books and articles. But if you find something referenced that would be useful to you, copies can be borrowed from — or photocopied for a reasonable price by — the American Philatelic Society’s Research Library, or possibly from another philatelic library closer to you.

The pairs of 1¢ Kansas-Nebraska overprints shown nearby illustrate the danger of relying upon printed references.

The vertical pair was listed on eBay as a fake, although the error does exist. These occurred because the bottom horizontal row of one sheet was missed due to a misplacement of the sheet when the overprint was applied. So, there should be 20 such pairs. A mint pair of the error (Scott 658a) is valued at $300 in the 2016 Scott Specialized Catalogue of United States Stamps and Covers.

The two horizontal pairs came from a different source. Genuine examples could not exist, and no such error is listed in  the Scott catalog. I got them to include in my reference collection of fakes. This sort of collection is a key resource that almost every expert builds and maintains.

The three pairs are dangerous because the first step in determining if a Kansas-Nebraska overprint is fake or genuine is finding whether the overprints are printed on the correct stamps.

That is, the stamps should have vertically ribbed gum with a specific type of horizontal gum breaker. Two of the pairs pass with flying colors. The third has disturbed gum, but seems to be close to the standard.

The next step is to look at the overprint. Are the dimensions proper? Is the impression correct? Is there evidence of the overprint on the back of the stamp?

Third, compare the letters and the period in the overprint and their placement to the known counterfeits.

In this case, we also need to check to see if the patients (stamps that are candidates for expertization) are known varieties or something being put forward as a new error?

To make a long story short, all three pairs are fakes.

The vertical gum ribbing on the vertical pair, on close examination, has been faked. That is why the gum appears to be disturbed. So that one can ruled out as possibly genuine.

As I already noted, the two horizontal pairs are not known in that form, and it would be extremely difficult for the production process to have produced them. That is strike one.

Strikes two and three come from a close examination of the overprints, though they could fool an amateur.

With some characteristics of the stamp and overprint matching the standard or being close, the owners might have been tempted to let hope triumph over reality, and to put the stamps in his or her album, as genuine.

This is the 21st article in the series on expertizing that began in March 2014. At a recent stamp show, I was asked if the series might be released as a pamphlet. There is no plan to do so at this time. One reason is that I’m not close to running out of subject matter.

I suggest that those wanting access to the earlier articles subscribe to Linn’s online because the website to which you gain access has back issues that cover the time period in which the expertizing columns have appeared.