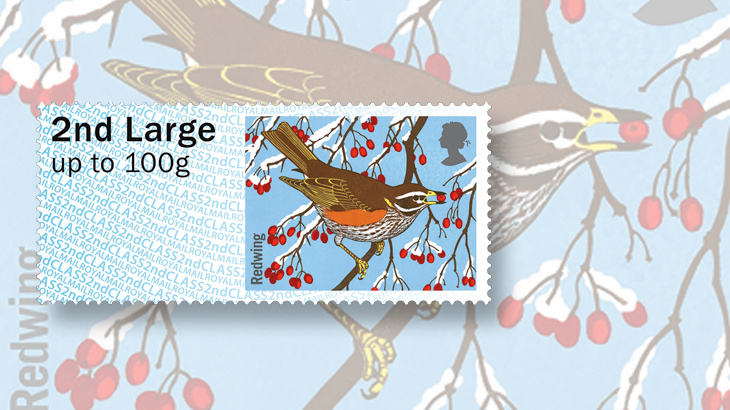 The fourth label in the new Winter Fur and Feathers post & go set depicts a redwing with a berry in its beak. 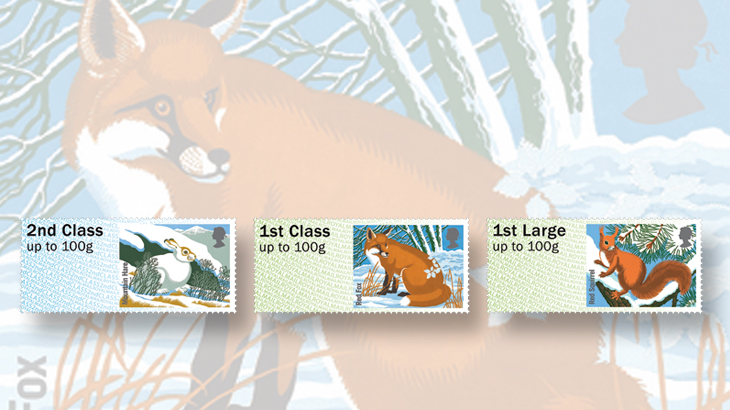 Three of Great Britain’s Winter Fur and Feathers post & go labels picture (from left to right) a winter hare, a red fox and a red squirrel.
Previous
Next

Royal Mail calls such labels “post & go.” The denominations, or service indicators, are printed at the time of purchase.

The new-issue announcement from Royal Mail said of the mountain hare: “A true alpine mammal, the mountain hare inhabits upland areas with a height of more than 500 metres [1,640 feet]. From October onwards, it undergoes a series of remarkable moults, transforming from brown to pure white. During average British winters, this makes the hare virtually invisible.”

The red fox, known for its sleek coat and bushy tail, can be found in many habitats in Great Britain. The British Wildlife Center lists its habitats as sea cliffs, sand dunes, salt marshes, pet bogs, mountains and woodlands, adding that it is particularly abundant in urban areas. In the winter, the red fox grows more fur to keep it warm.

Unlike the red fox, the red squirrel is on the decline in Great Britain, with approximately 140,000 remaining in that country, according to the Forestry Commission. Most of these (120,000) are in Scotland.

The Forestry Commission also gave hints on how to identify these squirrels: “Red squirrels usually have russet red fur, although coat colour can vary with some reds appearing very grey (and some grey squirrels can have red fur down their backs and on their feet). They are small with ear tuffs — large tuffs in winter — while grey squirrels are stockier and rounder. There is little difference between males and females, which makes it difficult to distinguish between the sexes.”

The one “feather” in the Winter Fur and Feathers set is the redwing (Turdus iliacus). A winter migrant to Great Britain, this member of the thrush family of birds usually arrives in late September or October and leaves in March or April.

The Royal Society for the Protection of Birds says of the redwing: “Its creamy strip above the eye and orange-red flank patches make it distinctive. They roam across the UK's countryside, feeding in fields and hedgerows, rarely visiting gardens, except in the coldest weather when snow covers the fields.”

Robert Gillmor, a founding member of the Society of Wildlife Artists, created the illustrations for the labels, and Osborne Ross designed them.

Royal Mail also is offering a first-day cover franked with all four of the Winter Fur and Feathers post & go labels.