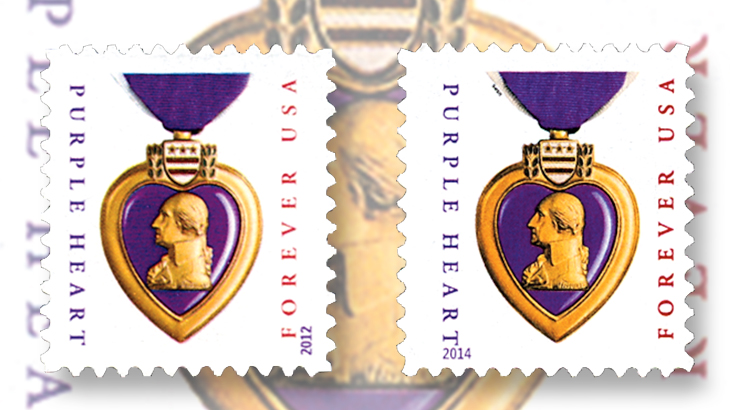 At left is the original gravure-printed Purple Heart stamp with white background issued in 2012. The new stamp at right is offset-printed with "USPS" microprinting near the top left edge of the purple ribbon.

A new variety of the latest United States Purple Heart forever stamp is now on sale in some U.S. post offices.

However, the new stamp is printed by offset lithography, as opposed to the gravure printing of all earlier varieties.

And for that reason, unlike any of the previous issues with this white-background design, a microprinted “USPS” appears near the top of the stamp, along the left side of the ribbon from which the Purple Heart medal is suspended.

The new variety was printed by Sennett Security Products in panes of 20. Collectors can look for a plate number S111111 (S + six digits) in the pane margin to confirm that the stamps are the new 2015 variety.

Previous varieties were printed by Avery Dennison or CCL Label, and therefore show a plate number beginning with V (for Avery printings) or C (for CCL printings) followed by six digits.

CCL Label acquired the stamp division of Avery Dennison in 2013, but the Postal Service confirmed earlier this year that CCL was no longer printing United States stamps.

USPS spokesman Mark Saunders told Linn’s Stamp News that the new Purple Heart variety was printed this year in October, but that the stamps were distributed to post offices as needed, without any official first day of issue.

“To better serve our customers, we reprint non-commemorative stamps when supplies run low and distribute them among our postal network as needed,” Saunders said.

The plate position diagram on the reverse of the new pane indicates 10 panes of 20 stamps (two vertical rows of five) on the plate, or 200 stamps on a full sheet.

Because the stamp design includes microprinting for the first time, and the stamp is printed using a different process than any of the previous varieties, it is expected to be assigned a major Scott catalog number after the editors of the Scott Specialized Catalogue of United States Stamps and Covers examine it.