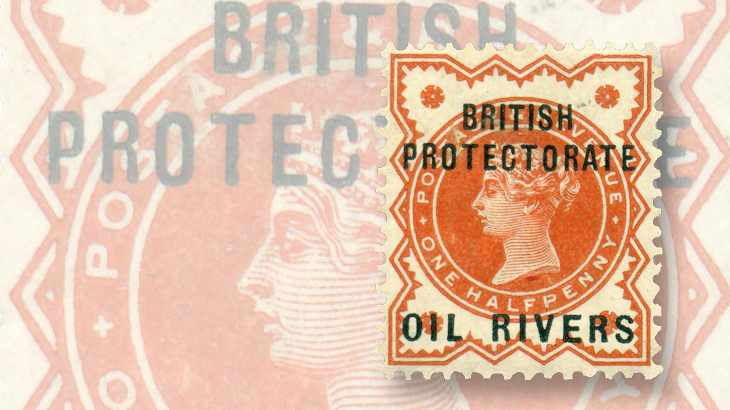 Stamps of the short-lived entity called the Oil Rivers Protectorate are found in the Scott Classic Specialized Catalogue of Stamps and Covers 1840-1940 under its successor’s name, Niger Coast Protectorate.

Part of the colonial empire of superpower Great Britain, the Oil Rivers Protectorate was established in 1885 in a region now part of Nigeria, on the western coast of Africa. The protectorate was administered by a commissioner representing the home government in England.

The delta region was the site of extensive slave-dealing beginning in the 17th century, but the palm-oil trade became the major enterprise by the 1830s. The Oil Rivers name refers not to petroleum (which wasn’t discovered there until the 1950s) but to palm oil, which was used as a lubricant in Britain’s Industrial Revolution and in soap.

At the time of the new protectorate, correspondence was generated primarily, if not entirely, by missionaries and the Royal Niger Company, and regular British stamps of the 1887 issue were used, “under some arrangement with the British Post Office,” according to P.L. Pemberton, writing in Mekeel’s Weekly Stamp News of Sept. 9, 1911.

Sir Claude Macdonald, Her Majesty’s Commissioner (consul-general) in Zanzibar from 1887-89, was appointed to the equivalent post in the Oil Rivers Protectorate and arrived on July 28, 1891, in the capital of Calabar. The British Empire had officially established its Oil Rivers outpost.

The archives of Thomas De La Rue & Co. in London contain a letter from the General Post Office dated April 8, 1892, that asks Messrs. De La Rue “for a supply of a stock of British postage stamps adapted for use in the Oil Rivers Protectorate by overprinting them with the words ‘British Protectorate Oil Rivers.’”  Six lots of the overprinted stamps were requested, one for each of the vice consulates in Oil Rivers: Benin River, Forcados, Brass, Bonny River, Opobo and Old Calabar River.

Six specific denominations of overprinted stamps were requested. Five were available using the Great Britain Queen Victoria Jubilee issue of 1887-92 (Scott 111-122). That series did not include a 1-penny stamp, so the 1881 definitive stamp depicting the queen (88) was used.

All of the overprints are in black ink, in three lines of capital, sans serif letters: “BRITISH/PROTECTORATE/OIL RIVERS.” The ½d stamp is vermilion; 1d, lilac; 2d, green and carmine; 2½d, violet; 5d, lilac and blue; and 1-shilling, green.

The letter of instructions to De La Rue warned that, “as the climate of the Oil Rivers district is exceedingly damp, the sheets of stamps should be separated by sheets of blotting paper, and each lot should be enclosed in a tin-lined case and sent as freight to the Vice-Consul for whom it is intended.”

De La Rue’s specimens of the proposed overprints were submitted to the GPO on May 5, 1892, and approved on May 5. The printing invoice was dated July 2, and early 20th-century philatelic writers in this specialty area have agreed that the stamps were available in Oil Rivers in July.

In November 1892, De La Rue wrote to Commissioner Macdonald, apparently replying to an inquiry regarding preparation of an issue of definitive stamps specifically for Oil Rivers. De La Rue quoted prices for an issue of adhesive stamps depicting the queen’s head. The contract for the new issue instead was awarded to Waterlow & Sons, who produced Oil Rivers stamps in 1893 only to have the region’s name change before the stamps could be issued.

These Niger Coast Protectorate stamps (Scott 37-42) have the words “Oil Rivers” at the top of the vignette lightly lined over (but still visible) by the stamp engraver, and “NIGER COAST” rather clumsily added in plain black lettering in the top margin.

Between the Oil Rivers Protectorates overprinted stamps and the Niger Coast issues are expensive (some wildly so) provisional issues (Scott 7-36). They are handstamped, surcharged examples of Oil Rivers stamps (1-6), beginning in September 1893 with the ½d on half of the 1d lilac (Niger Coast Scott 7). The handstamped marking is a vertical line from upper right to lower left, with “½d” to either side of the line.

As might be expected from handstamped markings, varieties exist, including inverts and doubled prints. The Scott Classic Specialized catalog warns that “dangerous forgeries exist of all surcharges.”

Many collectors at the time considered the 1893 provisionals to be speculative items intended only to fleece the philatelic community, but nevertheless eagerly sought them out for purchase.  P.L. Pemberton, in the previously cited 1911 Mekeel’s article, said the provisionals were greeted with “a storm of indignation,” and called the series “a heartbreaking one for the advanced specialist and hopeless from the point of view of the ‘moderate specialist,’ as it contains several stamps of which only one or two specimens are known.”

The least expensive of the 1893 surcharged issues in the 2015 Scott Classic Specialized catalog is a used example of Scott 7, valued at $160.

Collectors who simply want examples of the ephemeral Oil Rivers Protectorates’ postage may be content with a mint set of Scott 1-6, valued at $155.75, or a used set, for $124.75, and leave those 1893 surcharges to the determined specialists.