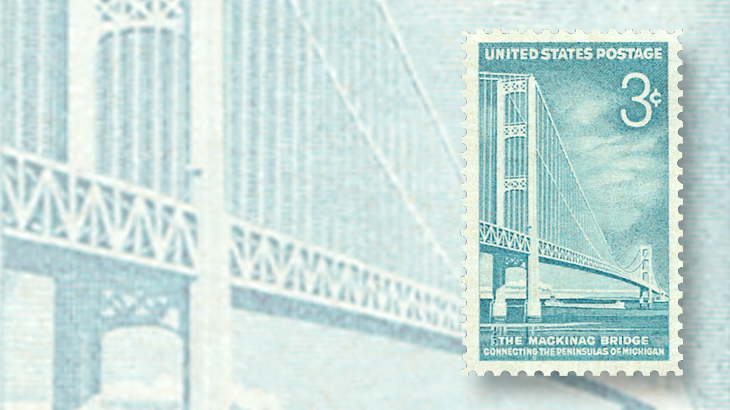 The 3¢ Mackinac Bridge commemorative stamp issued in 1958. The stamp was issued in advance of dedication celebrations.

On Nov. 1, 1957, the five-mile long Mackinac Bridge, which spans the Straits of Mackinac to connect the upper and lower peninsulas of Michigan, opened to traffic for the first time.

The first car to drive across the bridge was a dark green 1951 Chevrolet Styleline Deluxe owned by Albert Carter of Illinois.

Construction on the bridge, which was designed by David B. Steinman, began on May 7, 1954. In the years before the bridge was opened, a small fleet of ferries transported people and their vehicles across the straits.

A 3¢ stamp commemorating the Mackinac Bridge was issued June 25, 1958, just ahead of a dedication festival that took place June 26-28.

A second Mackinac Bridge stamp, with a $4.90 denomination, was issued Feb. 3, 2010, to fulfill a new Priority Mail flat rate that went into effect one month earlier.