Scott to reorganize Standard catalog beginning with the 2018 edition 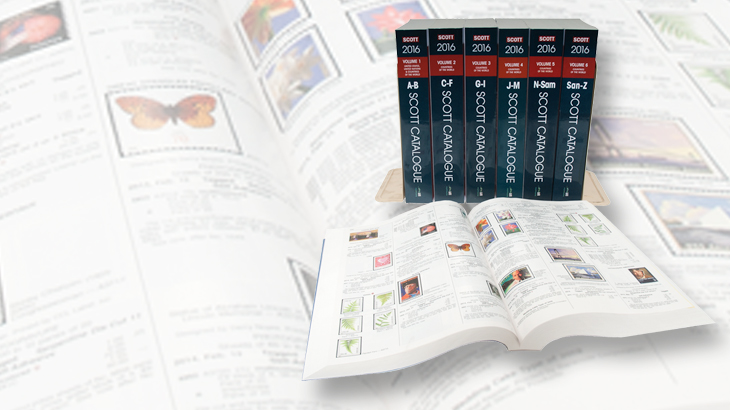 The 2017 edition of the Scott Standard Postage Stamp Catalogue will be the last to be organized in six volumes. A decision regarding the reorganization of the 2018 edition is most likely expected before Vol. 1 of the 2017 Standard catalog is published in

Many Linn’s readers and Scott catalog users received a survey this past summer asking for opinions on how to reorganize the Scott Standard Postage Stamp Catalogue.

The Standard volumes have been organized in six volumes since the 1998 edition.

Each year the editors add thousands of new listings and useful information. As a result, the catalogs are now bursting at the seams.

As you might guess, reorganizing the catalogs is a major undertaking and is a decision that cannot be taken lightly by the Scott mangement team.

Many factors come into play, including — but by no means limited to — meeting the needs of our customers, who include not only stamp collectors, dealers, but also libraries and other institutions; creating a balance of countries within each volume; the cost of each volume; the weight of each volume; and the requirements of the printer of the catalogs.

All of these factors, and many more, will be considered as we make our decisions.

These decisions cannot be made in haste. For this reason, the first difficult decision we have made is to continue the six-volume organization through the 2017 catalog season.

For the Scott editors, the 2017 catalog season has begun. As this is written, we are valuing and editing Vol. 1, which includes United States, United Nations and countries A through B.

Because the catalog season begins in late October for the editors, we could not make the decision regarding the reorganization of the catalogs and implement the change in time for the 2017 catalog season.

That said, the 2017 edition will bring to an end the six-volume organization of the Standard catalog.

We most likely will make a decision about the 2018 edition before Vol. 1 of the 2017 catalog is published next April.

We thank all who participated in the survey. The response to the survey was overwhelming. We value your input, and we will keep you informed of our decision.