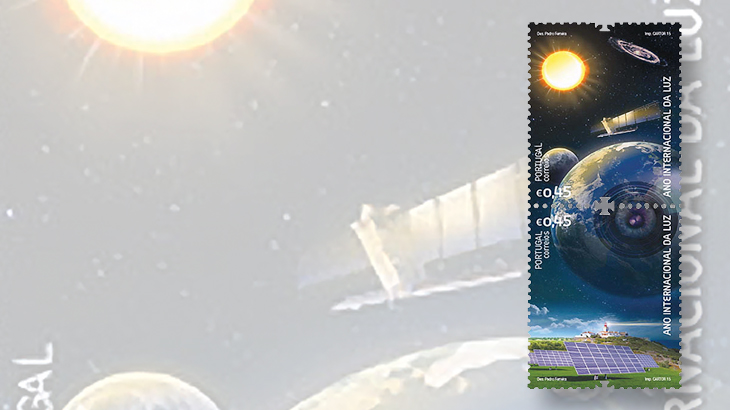 Portugal’s se-tenant pair of stamps for the International Year of Light features views of space and Earth. 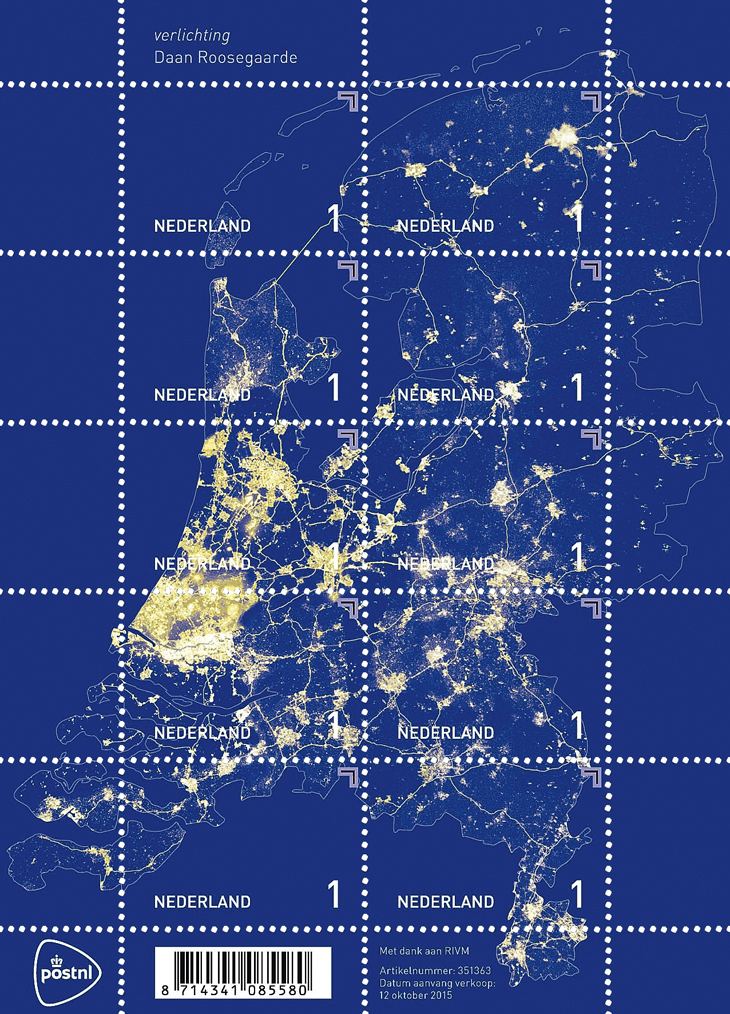 Artist and innovator Daan Roosegaarde designed this pane of stamps showing the Netherlands as seen at night from space. Photographs taken by astronaut Andre Kuipers while on the International Space Station were used to create the designs. 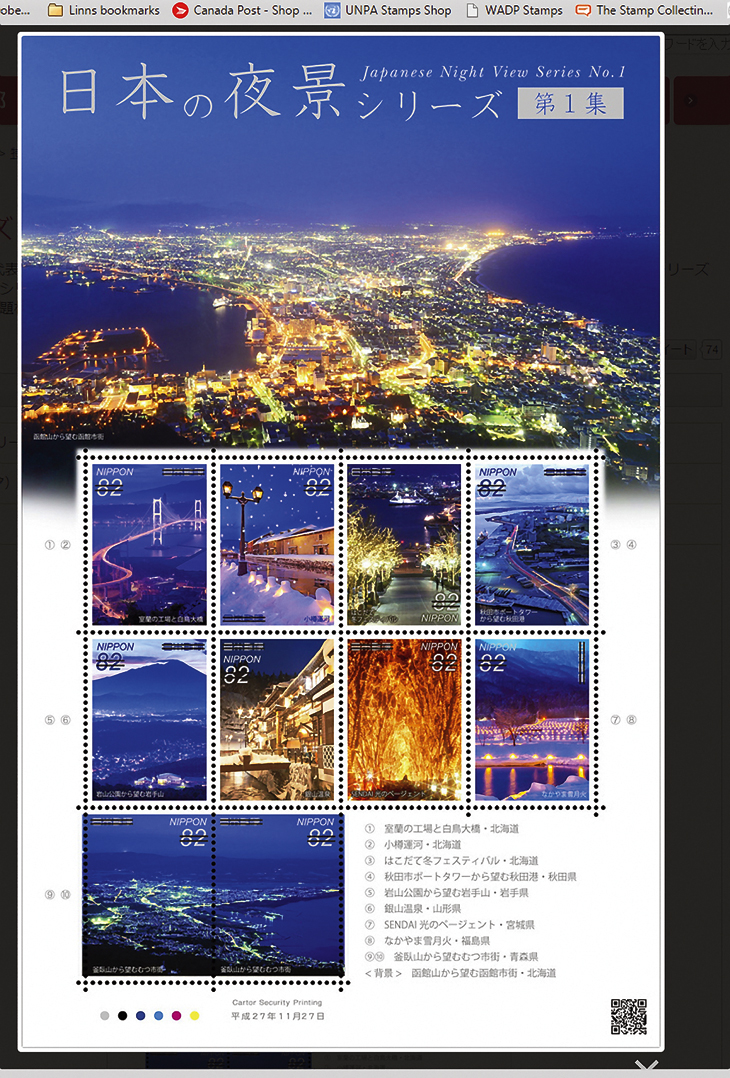 The first pane of stamps in Japan’s new Night View series will be issued Nov. 27. The stamps show photographs of Japanese cities and towns taken at night.

The souvenir sheet in the Australia Stamp Collecting Month issue for 2015 depicts the eight planets of our solar system.
Previous
Next

Japan will introduce a new series of stamps Nov. 27 featuring night views of cities and towns in that country.

The first set in the series comprises 10 se-tenant (side-by-side) 80-yen stamps in a pane. The large illustration at the top of the pane shows the lights of the harbor city of Hakodate, as viewed from the mountain of the same name. The city’s winter festival also is featured on the third stamp in the top row.

The same scenes of Hakodate at night can be found on the city’s tourism website, which describes the view from Mount Hakodate as resembling a sparkling jewelry box.

The website describes the lights of the winter festival: “With the exotic streets colored with illumination of about 50,000 lights, you can take full pleasure of a dreamy night view only seen in winter in Hakodate. The trees planted in Motomachi Park and on such sloping streets as Hachimanzaka and Nijukkenzaka are outlined with lights. They appear to glitter more brightly on a day when fresh snow is piled up on the ground.”

Another winter illumination festival, Sendai’s Pageant of Starlight, is pictured on the third stamp in the second row, directly below the aforementioned Hakodate stamp. Approximately 600,000 lights are hung in the zelkova trees along the city’s main street during this annual event held each December.

Festivals with candlelight and snow are pictured on two stamps in the pane: the Otaru Snow and Light Path Festival in Hokkaido (second stamp in the top row), and the Zhongshan Yukitsuki Fire in Shimogo-Machi (fourth stamp in the second row).

The remaining two stamps in the two rows picture the 2,360-foot long Hakucho Bridge in Muroran (far left) and a view of the Port of Akita from the Port Tower Selion (far right).

A view of Morioka from the observation deck at Rocky Mountain Park and gas lamps in Ginzan Onsen are shown on the first two stamps in the center row, respectively.

The Yamagata Tourism Information Center describes the latter scene: “This hot springs (onsen) village evokes the atmosphere of old Japan. Three and four story traditional Japanese inns built during the Taisho and early Showa eras stand side by side, surrounding the quietly flowing Ginzan River. The gas lamps create unforgettable evening scenery, casting reflections on the surface of river and lighting up the winter snow.”

Illustrated across the final two stamps in the pane is a panoramic view of Mutsu from Mount Kamafuse.

Cartor printed the stamps by offset. The designs are based on photographs from different photographers.

A pane of 10 se-tenant stamps from the Netherlands pictures the country at night, as seen from space. These nondenominated stamps for first-class domestic mail were issued Oct. 12.

Daan Roosegaarde, an artist and innovator known for his work with lights, designed the stamps, using as inspiration aerial photographs taken by Dutch astronaut Andre Kuipers from the International Space Station and satellite photographs of the Netherlands. The map in the background is from the National Institute for Public Health and the Environment.

In a press release from the Netherlands’ PostNL, Roosegaarde said of his designs: “The stamp sheet shows the Netherlands as we have never seen it before. You don’t really know whether you’re looking down at the earth from above, or looking at the starry sky from the ground. It’s an amazing network of light which establishes connections. It’s ominous and poetic at the same time: it gives us an insight into our behaviour and the impact it has on our landscape. In this way, the stamps offer both literal and figurative enlightenment.”

Australia celebrated Stamp Collecting Month in October with a set of stamps devoted to our solar system. The stamps and related products were issued Sept. 22.

Designed by Jo Mure of Australia Post Design, each stamp shows one of the eight planets of our solar system. A souvenir sheet includes all eight stamps.

The size of each stamp relates to the size of the planets. The two smallest planets, Mercury (3,032 miles in diameter) and Mars (4,221), are shown on the two smallest stamps, measuring 25 millimeters by 30mm, and 30mm by 25mm, respectively.

The Mars and Mercury stamps each are denominated 35¢, and the other stamps are each denominated 70¢.

The Neptune stamp also depicts Pluto, no longer classified as a planet but as a “dwarf planet.”

On its website about solar system exploration, NASA said: “Discovered in 1930, Pluto was long considered our solar system's ninth planet. But after the discovery of similar intriguing worlds deeper in the distant Kuiper Belt, icy Pluto was reclassified as a dwarf planet. This new class of worlds may offer some of the best evidence about the origins of our solar system.”

EGO Print printed the Our Solar System stamps by offset.

Pedro Ferreria used photographs from various sources in his design for the International Year of Light pair. The upper stamp depicts the sun, a galaxy, the satellite Sentinel-1, and the moon. Shown on the lower stamp are solar panels and a lighthouse. Connecting the two stamps is an image of what appears to be Earth with a giant eye.

Cartor printed the stamp pair by offset in sheets of 50.