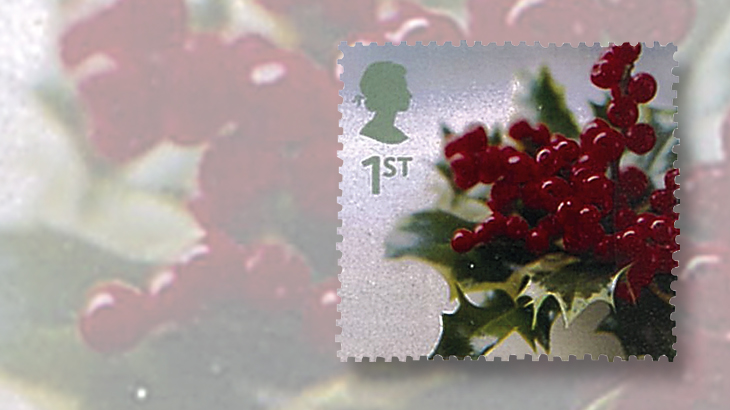 This stamp from Great Britain’s 2002 Christmas issue is an excellent design, in the author’s opinion. 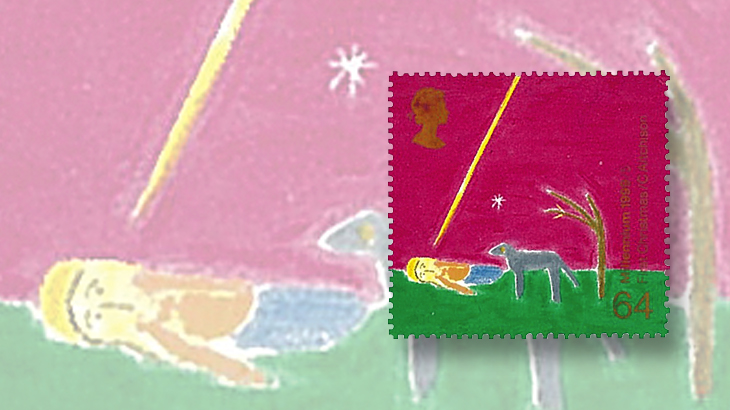 This 64-penny Christmas stamp was issued by Great Britain’s Royal Mail in 1999. It is one of the author’s least favorite designs. 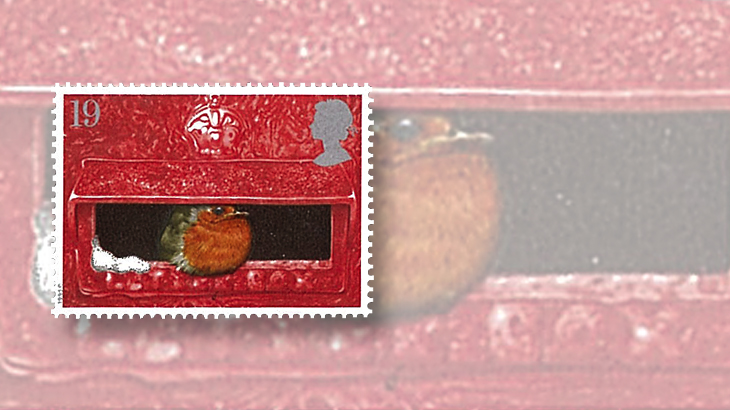 The scene of a robin in a pillar box, shown on this Christmas stamp issued in 1995, evokes the feeling of a chilly winter’s day. 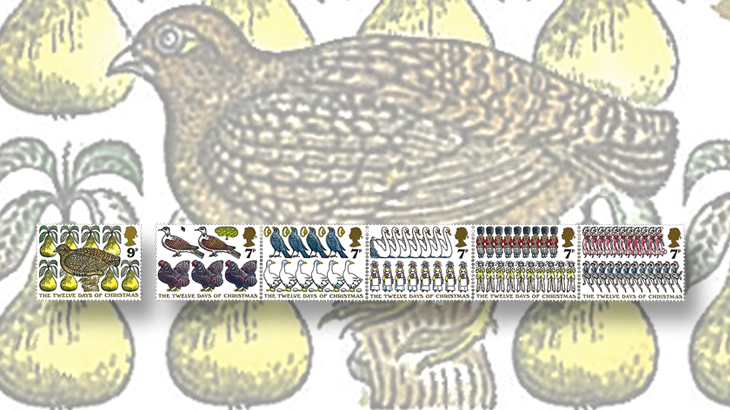 The traditional Christmas song The Twelve Days of Christmas was cleverly illustrated by artist David Gentleman on Great Britain’s 1977 Christmas issue with a 9-penny stamp (left) and strip of five 7p stamps.
Previous
Next

These designs have varied in quality, but a few have been excellent and memorable.

The nondenominated first-class Holly self-adhesive stamp (Scott 2082) from the 2002 Christmas set picturing seasonal plants is quintessentially Christmas to me. I consider it to be authentically Christmas and one of the most outstanding designs of all Britain’s Christmas stamps.

Traditionally, the red berries are said to represent the blood of Christ. The spiked green leaves are reminiscent of the crown of thorns, both Christian symbols of the Crucifixion.

The photograph by Carol Sharp, who specializes in taking photographs of flowers, food and still lifes, is framed against a sky blue and pink background, with a slightly softened border giving the effect of a frosted window pane.

The main image is sharp and precise, appearing almost three dimensional. Nothing here cartoonish like so many of Great Britain’s annual Christmas designs.

Because it paid the first-class domestic rate, the stamp received widespread exposure in 2002. Also, it was issued both in sheets and in folded booklets of 12 self-adhesive stamps.

In 1995, the Christmas stamp showing a robin taking refuge from the winter cold in a the slot of a pillar box, a traditional British receptacle for mail (Scott 1634), was voted the most popular design of the year by readers of the British Philatelic Bulletin, Royal Mail’s publication for stamp collectors.

In 1961, Great Britain chose the robin as its national bird. The first British stamp featuring the robin redbreast was issued in 1966 (Scott 463).

On the 1995 Christmas stamp, the image of the robin taking shelter is an evocative one, and you almost shiver along when looking at the puffed up feathery coat of the bird shielding itself from the frigid wind and the fallen snow.

Also, the stamp design suggests that the connection with family and friends through seasonal greeting cards and letters will warm hearts from the chilling effects that life’s vagaries can bring.

In addition, the bright red color of the pillar box serves as a reminder of Christmas.

Early in Victorian times, postmen walking the streets wore coats in bright red. This associated the mailman with robins.

First published in England in the late 18th century, The Twelve Days of Christmas might have originated several centuries earlier in France.

The popular rhyme is of the cumulative type. That is, with the addition of each new verse all former verses are repeated.

Gentleman captured the essence of the popular ditty by repeating in his designs the subjects of each verse from a single partridge in a pear tree to 12 lords a-leaping.

His minimal outlines and coloration make the song’s subjects, including the drummers drumming and the ladies dancing, immediately recognizable.

The 9p denomination shows a partridge among pears, illustrating the first verse, which becomes the last verse with the successive naming of ever-increasing gifts.

While it is unlikely that any single greeting card needed more than one stamp, the se-tenant arrangement in a strip of five forms a narrative.

The exact meaning of some of the song’s references is debated. The four birds are usually referred to as “calling birds,” but in the original they are “colly birds,” meaning black birds because colly is a regional word for “black” in England.

The adjective “outstanding” usually has a positive connotation meaning exemplary or the best. But it can also denote something odd or far wide of the expected. Such is the meaning for me in selecting the 1999 64p Christmas stamp (Scott 1882) as an outstanding example of Britain’s Christmas stamps.

I find the design odd and undecipherable, resembling a Jedi Star Wars character lying on the ground smitten by a light saber. To me, the design is not connected to Christmas in any self-evident way.

In fact, my understanding of this Christmas design is totally dependent on the artist’s interpretation of his work.

The artist, Craigie Aitchison (1926-2009), said: “I painted a child in a crib with a halo round his head. There’s a light coming down from heaven which cuts across the picture.

“There’s a sheep … well, a dog … looking at the child. I’m confused myself a little! Some people think my dogs look like sheep, so sometimes I put them in. There’s also a tree and a star.”

These are, in my humble opinion, Britain’s best — and worst — Christmas stamps.

I wish “Happy Holidays” to all.