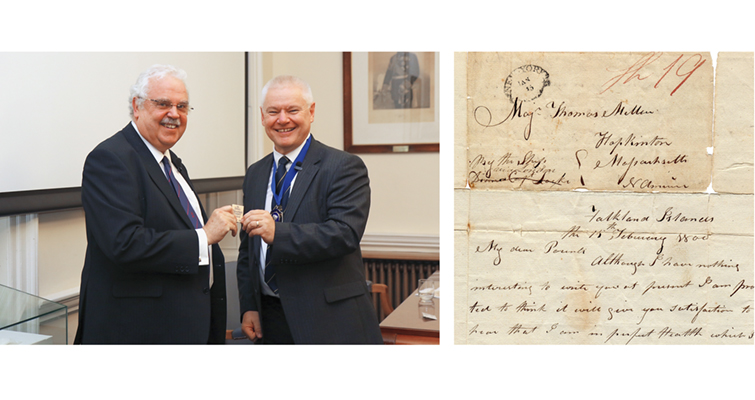 Michael Roberts (on the left in the left photo) receives a plaquette from Frank Walton, president of the Royal Philatelic Society London. The photo at right shows the earliest-recorded letter from the Falkland Islands, from 1800.

The following is a press release from the the Royal Philatelic Society London:

The postal history of the Falkland Islands from 1827 to 1945 was the title of the presentation and display given by Michael Roberts on 26 November to the members of The Royal Philatelic Society London.

In fact the time span was from 1800 because highlight among the superb covers shown was the first recorded letter from the Falkland Islands, only recently acquired by Michael. It was sent on 15 February 1800 and arrived in New York on 15 January 1801. At this time the islands were without formal government: a British garrison was established in 1833.

Prior to 1868 mail both to and from the islands received no postal marking of any description, even though prepayment of mail had been introduced on 1 August 1861. The first ‘Paid’ marking, inscribed ‘FALKLAND / PAID. / ISLANDS.’ and applied in black (hence known as the ‘Black Frank’), is recorded from early 1868 and continued in use until August 1878. The first postage stamps were introduced in the late 1870s, with the 1d and 6d being issued on 5 February 1978.

Giving the vote of thanks Edward Klempka commented that Michael’s collection is ‘possibly the finest that will ever be assembled’ of these islands that are held in affection by so many collectors.