The Kingdom of Cod islands: stamps of St. Pierre & Miquelon to 1957 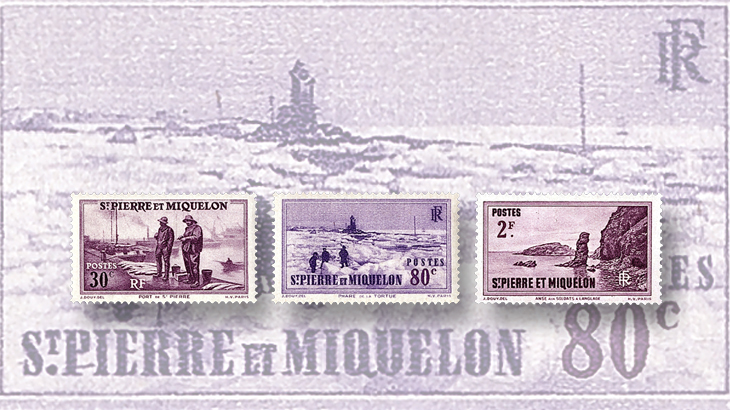 Nine other stamps in the 1938-40 group have a maritime theme showing Port St. Pierre with two fishermen standing on a dock. A view of Tortue Lighthouse in St. Pierre & Miquelon is the design subject for nine stamps in the same 33-stamp set. The final seve 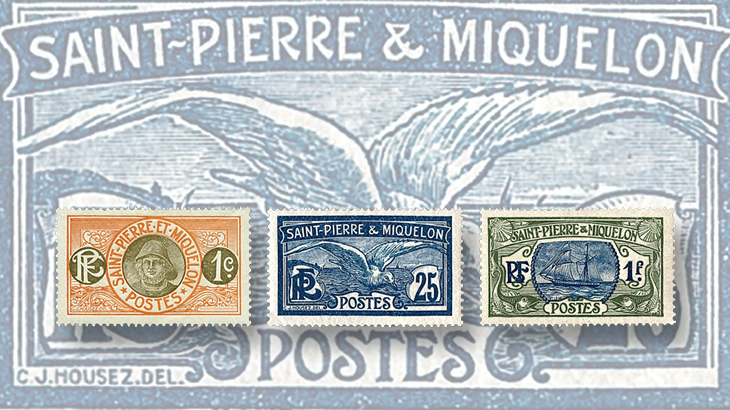 The first pictorial stamps issued for St. Pierre & Miquelon (1909-1930) feature a bearded fisherman; a fulmar petrel, a type of seabird, in flight over the sea; and a vignette of a fishing schooner framed by clamshells and graceful swimming fish. The coun 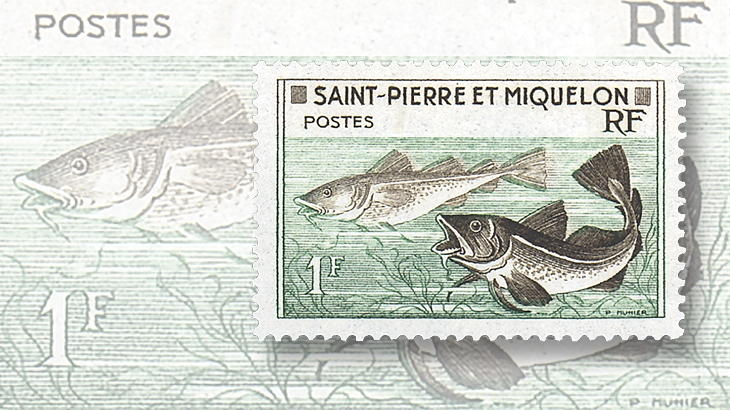 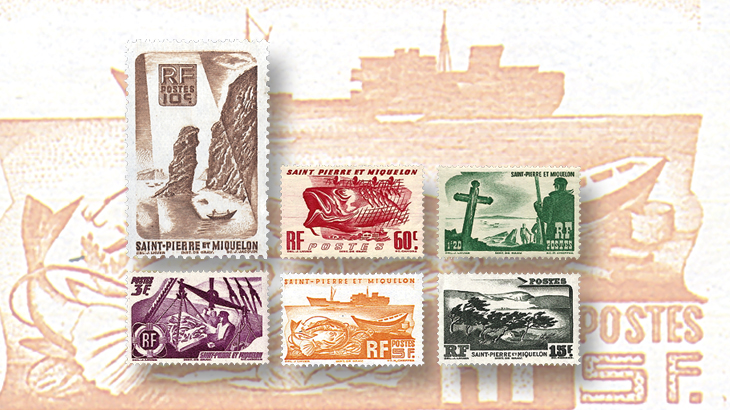 In 1947, St. Pierre & Miquelon stamps with six different designs with maritime themes were issued. The first four show the Soldiers’ Bay rock formation towering over a small boat. The next three stamps in the 1947 set honored the fishing industry with a l 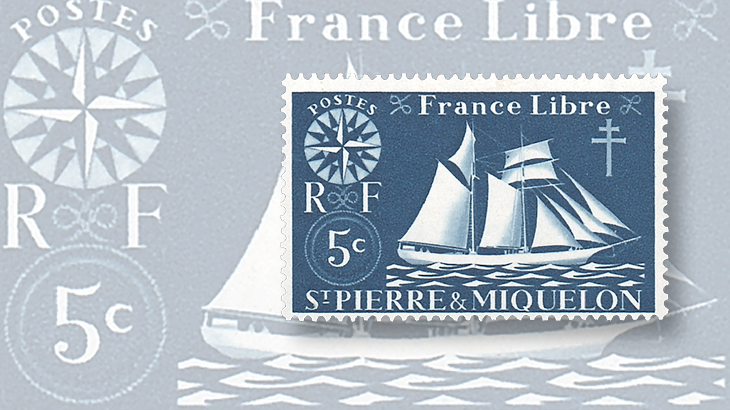 Special stamps were designed for the 14 colonies loyal to Free France in World War II. St. Pierre & Miquelon’s set of 1942 shows a St. Malo fishing schooner, the inscription “FRANCE LIBRE” and the Cross of Lorraine. 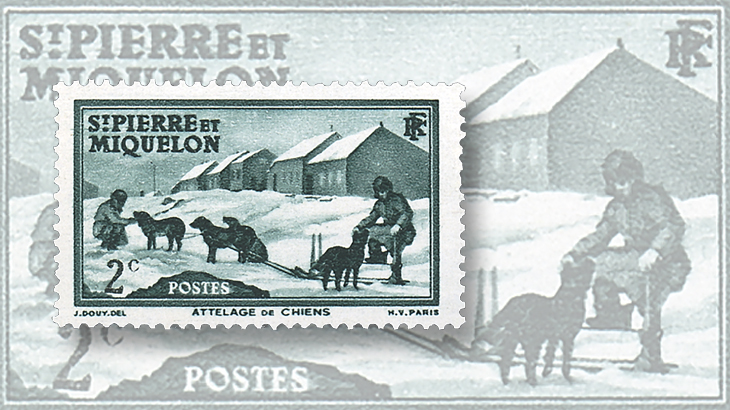 Some St. Pierre & Miquelon stamps unrelated to the sea or fishing subjects appeared from 1938 to 1940. The first group of eight stamps pictures a dog-sled team in a snowy landscape. 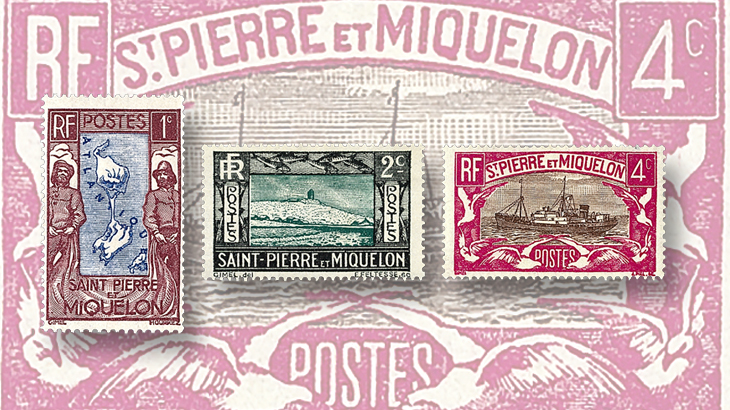 The 1932-33 stamp set issued by St. Pierre & Miquelon pictures a map of the islands flanked by two fishermen repeated on eight stamps in the set, the design known as Lighthouse and Fish on eight stamps, and a fishing steamer and seagulls repeated on stamp
Previous
Next

Postage stamps pay postal fees, but they also are intended to represent the country of their origin to the rest of the world. The stamps of St. Pierre & Miquelon vividly reflect that nation’s history and its setting.

St. Pierre & Miquelon is an archipelago of eight islands located in the Gulf of Saint Lawrence in the North Atlantic, some 16 miles off the southern coast of Newfoundland.

St. Pierre is the most populous and commercial of the islands, and also the administrative center. A small population resides on Miquelon; the remaining islands are virtually uninhabited.

Since the beginning of its recorded history, St. Pierre & Miquelon has been associated with fishing; indeed, St. Pierre is French for St. Peter, the patron saint of fishermen.

As early as the 1500s, Basque fishermen made regular seasonal visits to the rich cod-fishing grounds of the Grand Banks near the islands (Miquelon may be a Basque form of Michael). By the mid-17th century, there were permanent French residents on the islands.

The islands passed back and forth between France and Great Britain when the two countries vied for possessions in North America. France finally took lasting control of the islands in 1815.

Today, St. Pierre & Miquelon is a self-governing Collectivite Territoriale (Territorial Collectivity) of France, and the only remaining French possession in North America.

The first stamps specifically for St. Pierre & Miquelon, used from 1885 to 1892, were keytype issues (basic stamp designs used for one or more entities) of the French colonies, surcharged and overprinted with “SPM” or “ST PIERRE M-on.”

These stamps were replaced in 1892 by the Navigation and Commerce design of the French colonial stamps with “ST PIERRE ET MIQUELON” in a block at the foot of the design.

Of 10 different stamp-design subjects issued between 1909 and 1940, nine pertain to the sea and/or fishing.

The first three original (not colonial keytype) designs were issued from 1909 to 1930. Nine stamps (Scott 79-87) portray the head and shoulders of a bearded fisherman wearing wet gear, in a central vignette, in different denominations and colors. The 1-centime stamp (Scott 79), the lowest denomination of the group, appears in the first illustration.

The third design, used on six stamps (Scott 104-109), pictures a fishing schooner in a central vignette, with clamshells in the upper corners and swimming fish curled around the lower corners. The 1-franc stamp (104) with this design is pictured nearby.

Beginning in 1938, a new set of stamps was issued, with the first designs not directly related to the sea or fishing. Eight stamps (Scott 172-179) picture a dog-sled team in the foreground, and a row of buildings in a snowy landscape in the background. An example of the Dog Team design is shown in the third illustration, on the 2c stamp (172).

The St. Pierre & Miquelon archipelago has a rather odd combination of weather conditions: subarctic and subpolar oceanic, with aspects of the humid continental climate. There is snow, but the winters are generally rather mild.

During World War II, General Charles de Gaulle, leader of the Free French Forces and the Free France government-in-exile, commissioned Edmund Dulac, a noted book illustrator, to design special stamps for the 14 French colonies that were loyal to the Free French.

Gen. de Gaulle stipulated that the stamps should bear the inscription “FRANCE LIBRE” along with the Cross of Lorraine, the cross with two horizontal bars that was the unifying symbol of Free France.

In 1947, slightly after the classic period of stamps (generally considered as 1840-1940), a newly designed set of St. Pierre & Miquelon stamps was issued.

The six different subject designs of these stamps once again relate to the sea and to fishing.

Four stamps (Scott 324-327) portray Soldiers’ Bay, in which a towering rock formation dwarfs a dinghy carrying two men, presumably fishermen. Three stamps (328-330) feature a large, lunging fish and various symbols of the fishing industry. Several fishermen stand near a large cross with the sea in the background on three denominations of stamps (331-333), and three others (334-336) show a fisherman weighing the catch.

An additional three stamps in the 1947 set (Scott 337-339) portray a dinghy in the foreground, and a fishing trawler in the background. The final three stamps of the set (340-342) represent a storm-swept coast.

After the classic period (and, especially, beginning in the 1960s), the stamps of St. Pierre & Miquelon offer a diversity of design subjects that only occasionally include the sea or fishing.

However, as a parting salute to a long history of sea- and fishing-related designs, stamps depicting a fish freezing plant (Scott 346-349) and a fish freezer ship called Le Galantry (350) were issued in 1955 and 1956, respectively.

And, fittingly for a nation whose traditional livelihood was fishing, three stamps (Scott 351-353) issued in 1957 depict codfish, accompanied by two others (354-355) showing a lighthouse and a fishing fleet.