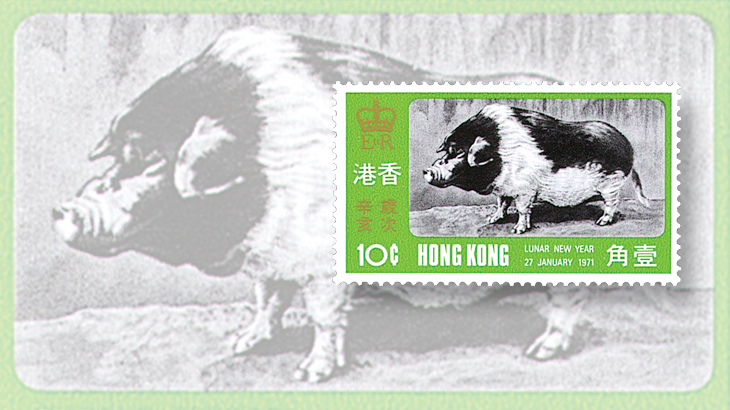 The Hong Kong 1971 Domestic Pig stamps (Scott 260-261) issued for the Lunar New Year are an excellent buy in mint never-hinged condition in the $35-to-$45 price range. Cacheted first-day covers also are in demand, and they are a good buy in the $50-to-$60

Pigs are among the oldest of domestic animals, having first been brought into the human fold about 15,000 years ago in Southwestern Asia. Domestic pigs are descended from Eurasian wild boars. Even before domestication, pigs were an important part of human diet because wild boar was hunted and eaten by humans at least as early as 400,000 years ago.

Although eating pork is banned by several religions (Judaism, Islam and some Christian sects), pork is the most widely eaten meat in the world and currently accounts for about 38 percent of meat consumption worldwide. While China leads the world in pork production, Denmark is the leader in per capita consumption.

The 2016 Scott Standard Postage Stamp Catalogue values the set in mint condition at $46 with the value in italics. Stamps of Hong Kong are in some ways tied to the China stamp market and are subject to some of the same wild fluctuations as the general China market.

But this set has held its value well and remains in good demand from topicalists, China collectors, and British Empire collectors. The set is currently selling in the $35-to-$45 dollar price range, and it is a good buy at those prices. Cacheted first-day covers, which are selling in the $50-to-$65 price range, also are in demand.