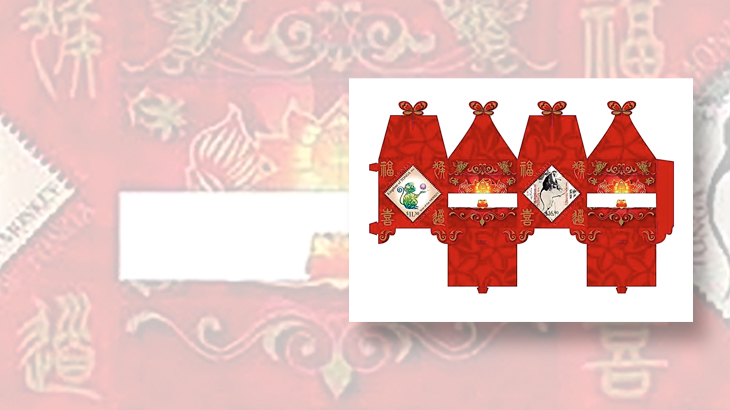 The front of Tonga’s Year of the Monkey issue before it has been folded into a sedan chair. 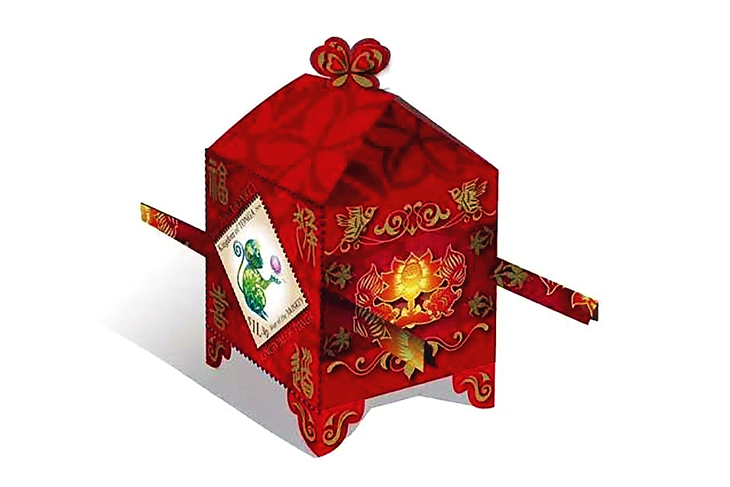 The completed sedan chair created by following the instructions on Tonga’s Year of the Monkey issue. 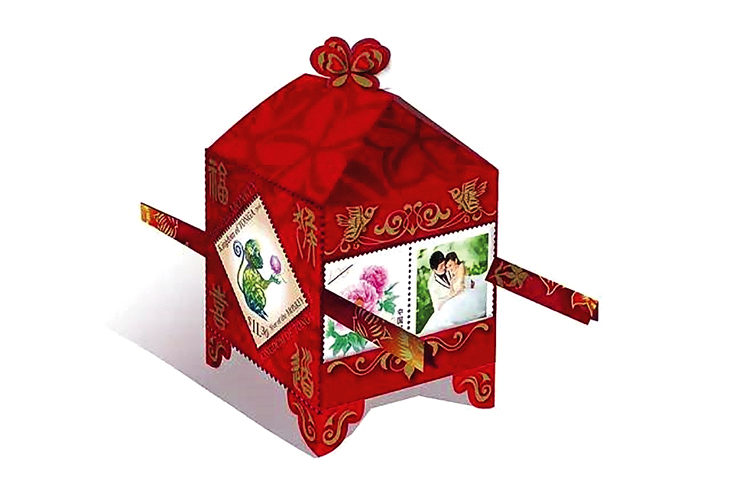 Tonga’s Year of the Monkey pane (shown folded into the sedan chair) can be personalized by inserting a photograph or other label in the space next to the printed postage stamp in the pane. 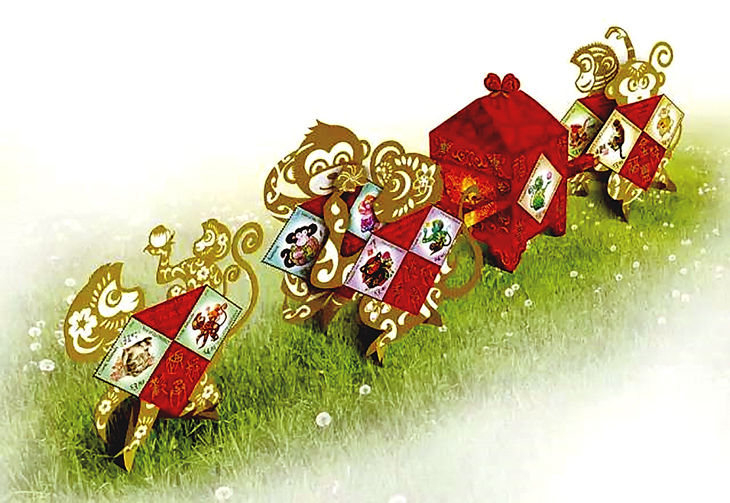 The souvenir sheets from each participating postal administration can be lined up to create a scene with the monkeys carrying the sedan chair made using the Year of the Monkey pane from Tonga. 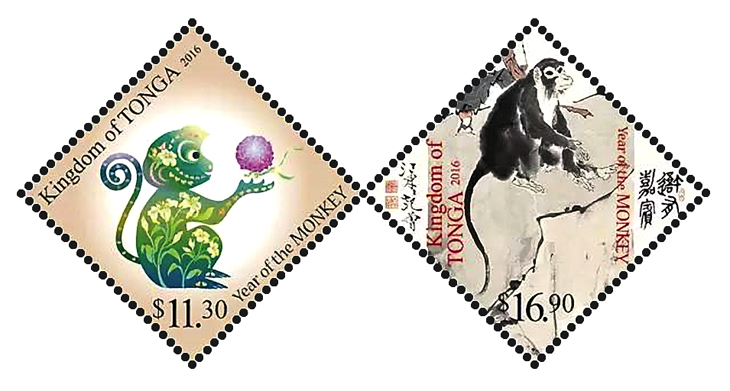 The two diamond-shaped stamps from Tonga’s Year of the Monkey issue show a symbolic monkey and a painting of a monkey. 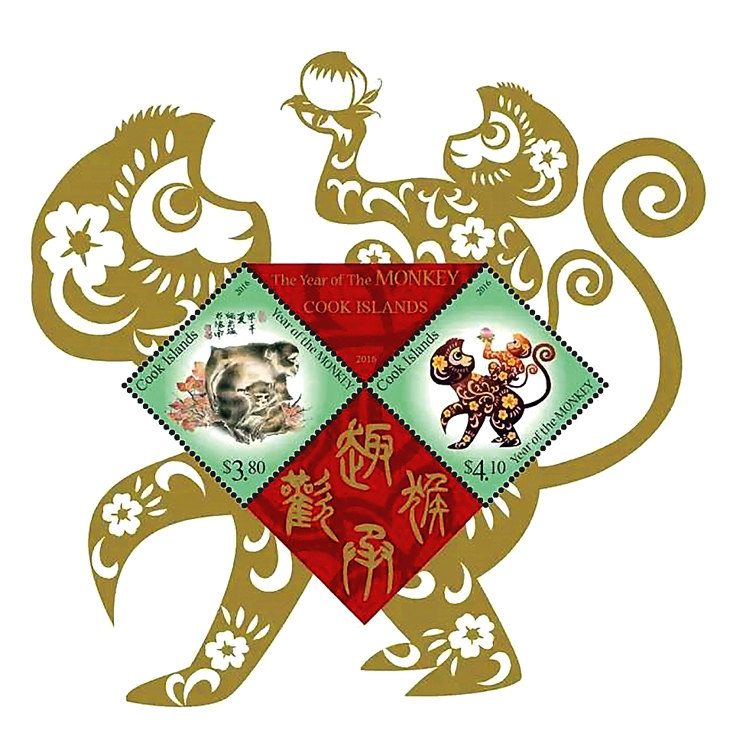 The Year of the Monkey souvenir sheet from Cook Islands is shaped like a monkey with an infant on its back.
Previous
Next

A stamp pane that can be folded into the shape of a Chinese wedding sedan chair is a newest creative issue from the Kingdom of Tonga. The sedan chair was a special transportation vehicle in ancient China, used especially to bring the bride to the groom’s home on the wedding day.

This special pane of stamps is from Tonga one of six islands located in the South Pacific that issued stamps Sept. 25 in a series celebrating the coming Year of the Monkey.

The other islands in alphabetical order are Aitutaki, Cook islands, Niuafo’ou, Penrhyn and Samoa. Aitutaki and Penrhyn are part of the Cook Islands, and Niuafo’ou is part of Tonga. The Year of the Monkey will begin on Feb. 8, 2016

The Kingdom of Tonga is known for its stamps of various shapes, the first of which were issued in 1963.

Tonga’s Year of the Monkey pane is shown nearby unfolded, both the front and back, and folded into the shape of a sedan chair.

The pane contains two $11.30 and $16.90 diamond-shaped stamps. The $11.30 stamp, designed by Sophia Zhang, shows a symbolic monkey in shades of green and decorated with a floral motif. The $16.90 stamp features a Chinese calligraphy painting by. Zeng Fan. Born in 1938, he paints in the traditional style, often using a monkey as his model.

Chinese calligraphy that translates to “Monkey’s congratulations” are shown on the four corners of these two stamps.

This Tonga Year of the Monkey pane allows collectors to insert printed personalized stamps. In the illustration shown, a personalized image from China is inserted, thus making it a good commemorative gift for a wedding couple or couples celebrating anniversaries.

The other participating postal administrations each issued a souvenir sheet with two diamond-shaped stamps. One stamp shows a symbolic monkey designed by Sophia Zhang.

While each souvenir sheet is shaped like a monkey, they all have different shapes.

For example, the souvenir sheet from Cook Islands is in the shape of mother and child monkeys. The $3.80 stamp in the sheet depicts a caligraphy painting of a baby monkey nestled in her mother's arms. The symbolic image on the $4.10 stamp shows a mother monkey looking at the infant on her back. The infant is holding a peach.

All of the sheets in this multination issue also are designed so that they can stand up and be lined up to create a procession of monkeys working together to move the sedan chair with their arms and tails. Such creative passion of the designer gives collectors a wonderful and exciting scene.