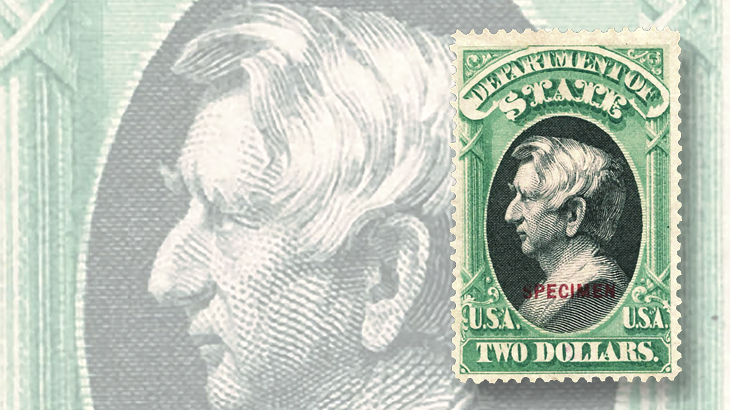 One of an estimated 20 surviving examples of the 1875 $2 green and black Department of State Official stamp with Specimen overprint. This example will be offered during the Dec. 11-12 Matthew Bennett International auction. 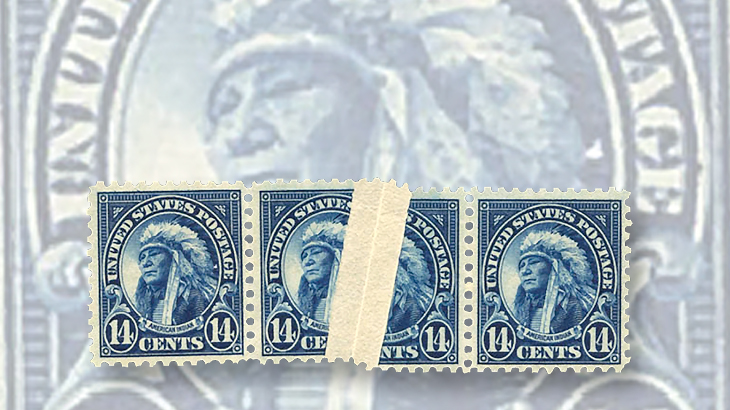 This unused horizontal strip of three 1923 14¢ blue American Indian stamps is affected by a dramatic paper fold through the center stamp. It will be offered during the upcoming Matthew Bennett auction in New York City. 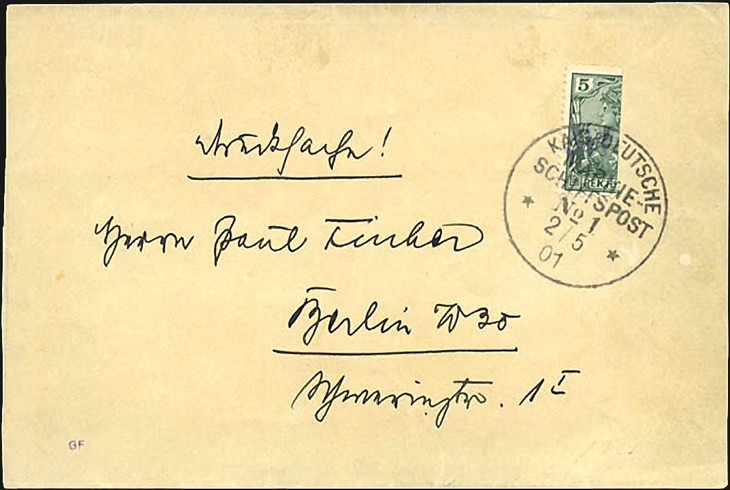 The Dec. 11-12 Matthew Bennett auction will also offer a German authenticated wrapper franked with the Vineta bisect provisional 3pf stamp. This franking was used only in 1901 by sailors on the Vineta mailing newspapers to Germany.
Previous
Next

The sale will take place at the Herald Square Suite of the New Yorker Hotel at 481 Eighth Ave., and will feature United States, Canada and worldwide stamps, collections and accumulations.

The sale begins with nearly 50 general and specialized collections, and continues with postmasters’ provisional stamps and U.S. classics.

A highlight among the back-of-the-book classics is a rare unused 1875 $2 green and black Department of State Official stamp with carmine Specimen overprint (Scott O68S, Type D).

The 2016 Scott Specialized Catalogue of United States Stamps and Covers notes that just 32 examples of this stamp were sold, but Bennett points out that according to specialist collector Robert L. Markovits, who is also identified in the stamp’s provenance, only about 20 are believed to have survived.

Even though the stamp is overprinted “Specimen,” Scott considers these special printings by Continental Bank Note Co., and for that reason they are not included with the Specimen listings in the Scott catalog. Instead, they are found among the Official stamps.

The stamp in this auction is described as exceptionally bright and fresh with marvelous color, and without gum as issued. It has been expertized and received a Philatelic Foundation certificate from 2004, and is offered with a presale estimate of $25,000, matching the listed value for Scott O68S in Vol. 1 of the 2016 Scott Standard Postage Stamp Catalogue. The Scott value is listed in italics, indicating that the stamp is an item that can be difficult to value accurately.

One of the more dramatic production varieties offered is a preprinting paper fold affecting the 1923 14¢ blue American Indian stamp (Scott 565).

Carefully preserved as the center stamp in an unused horizontal strip of three, the sizeable paper fold opens to show a section of unprinted paper running slightly diagonal through the vignette portrait. The left stamp of the three is lightly hinged, but the item has its original gum.

A standout among the auction’s international offerings is the rare 1901 3-pfennig on half of 5pf green Vineta provisional Germania stamp from the German Empire, tied on wrapper (Germany Scott 65B).

This overprinted bisect stamp was used only on the cruiser Vineta when the crew received American newspapers in Trinidad reporting the story of the ship’s recent visit and its celebrations of the kaiser’s birthday.

Crew members wanted to mail newspapers back to friends and family in Germany, so the bisect was created to make up for the lack of 3pf stamps to fulfill the rate. The bisect was authorized by the ship’s commander, and the stamp is listed as a major variety by Scott.

The cover is authenticated with expert signatures and two certificates (1987 Jakubek and 1986 Buehler), and is offered with a $16,500 estimate.

Information about the auction can be accessed online, and online bidding is an available option.