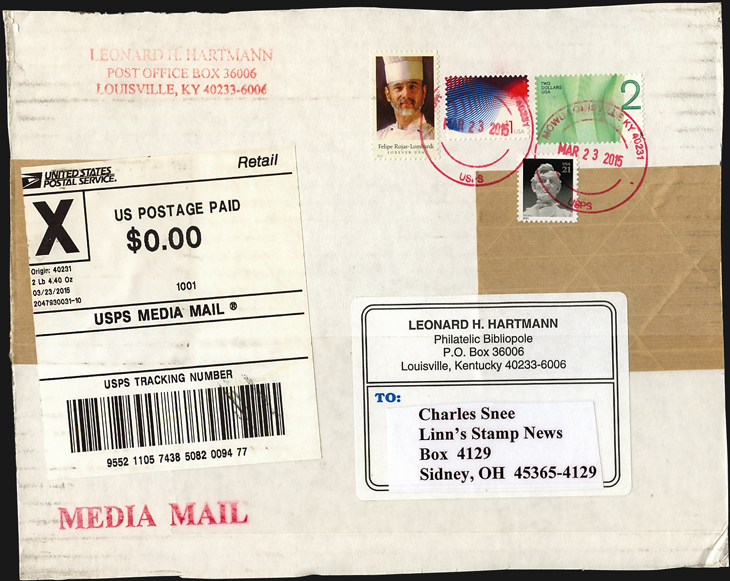 Two United States dollar-denominated stamps, the 2012 $2 Waves of Color and the 2014 $1 Patriotic Waves, are affixed to this parcel front. The original package, mailed in March 2015, contained a book from philatelic literature dealer Leonard Hartmann. 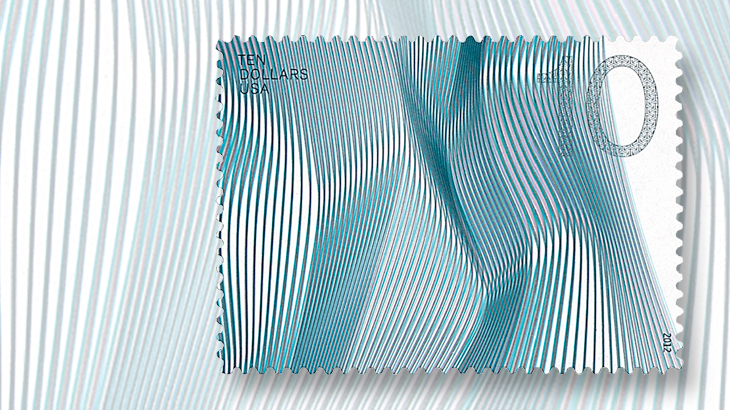 In the author's experience, the $10 Waves of Color stamp is the hardest to find postally used, on or off cover. Post offices seemed to place small orders for the stamp, and no additional stamps were ordered once the first batches sold out.
Previous
Next

Leonard Hartmann of Kentucky is a well-respected collector, specialist and exhibitor of the Confederate States of America.

He also happens to be a seasoned dealer in philatelic literature, operating under the moniker Philatelic Bibliopole.

Earlier this year, Leonard sent to Linn’s headquarters in Sidney, Ohio, a copy of a recent publication for our philatelic library.

His securely assembled parcel, addressed to my attention, came franked with a colorful quartet of stamps. Illustrated here is the front from that package.

Two crisp strikes of a March 23, 2015, red double-outline circular datestamp from Louisville, Ky., tie the quartet to the parcel. The abbreviation “MOWU,” for money-order window unit, is easily seen in the datestamp on the $2 Waves of Color.

If you look closely at the U.S. Postal Service mailing label at left, just below the large “X,” you will see that the parcel — sent via what the USPS calls media mail — weighed 2 pounds, 4.4 ounces at the time of mailing.

A red “MEDIA MAIL” handstamp below the label reinforces the method used to send the book.

According to the Postal Service, “Media Mail packages may not contain advertising,” and books sent via media mail “may contain incidental announcements of other books.”

Media mail also is subject to USPS inspection, but there is no evidence that the parcel shown here was opened prior to its arrival in our offices.

A good number of the complaints Linn’s received focused on the lack of a specific subject: the stamps don’t really have any central point of interest in the design.

Of the four, the $10 Waves of Color stamp, illustrated nearby, is by far the biggest.

In my experience, it’s also the hardest to find postally used, on or off cover. Post offices seemed to place small orders for the stamp, and no additional stamps were ordered once the first batches sold out.

Nonetheless, I managed to use a handful of them on some mailings to collector friends overseas. Look for one or two of them in a future column.