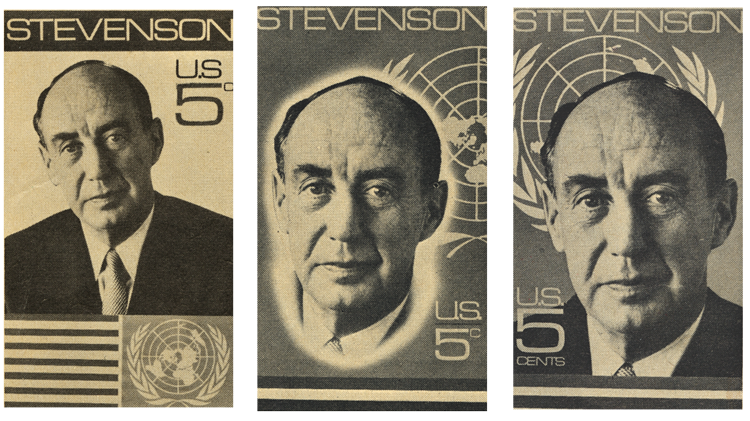 Rejected designs for the Adlai Stevenson stamp featured a portrait by photographer Philippe Halsman. A last-minute substitution of a different Halsman photograph was requested by the Stevenson family. 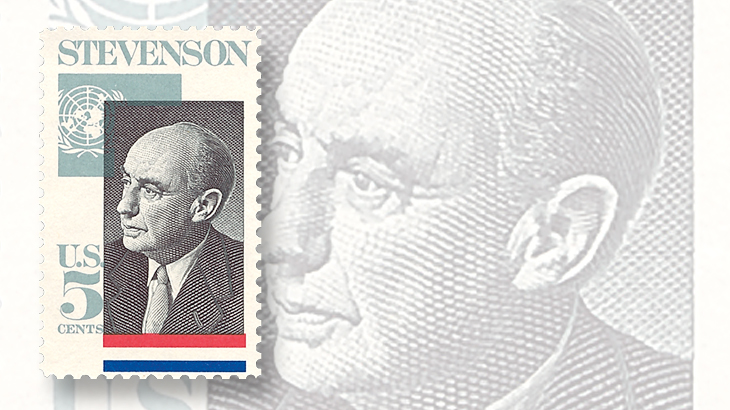 Adlai E. Stevenson II was given the unusual honor of a memorial stamp issued only three months after his sudden passing on July 14, 1965. This stamp was issued Oct. 23 of the same year. 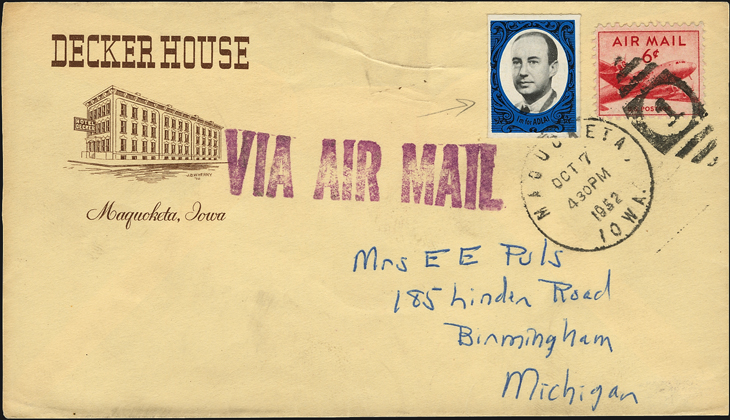 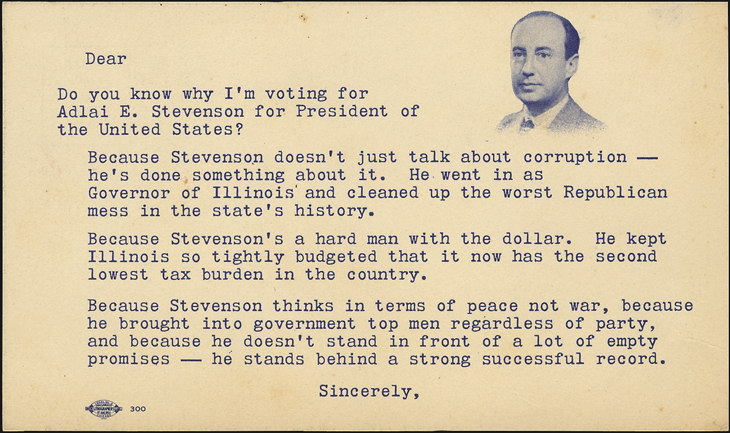 This unmailed postcard is an endorsement of Adlai Stevenson for president from his unsuccessful 1952 run as the Democratic Party nominee.
Previous
Next

The United States Post Office Department honored Adlai E. Stevenson II on a 5¢ stamp issued Oct. 23, 1965, shortly after he passed away suddenly on July 14, 1965, while serving as U.S. ambassador to the United Nations.

His death ended a distinguished career in politics that included service as governor of Illinois (1949-53), presidential candidate of the Democratic Party in 1952 and 1956, and a run for the nomination in 1960.

John Kennedy, who beat Stevenson for the Democratic Party nomination and ultimately was elected president in 1960, appointed him to the United Nations post shortly after taking office.

Stevenson was named after his grandfather, who had served as vice president of the United States in the second Grover Cleveland administration (1893-97) and ran again for vice president on the unsuccessful William Jennings Bryan ticket in the 1900 election.

New York artist George Samerjan designed the 1965 Adlai Stephenson commemorative, using a photograph by Philippe Halsman. However, this was not the first Halsman photograph selected for the design.

According to a report many years ago in Minkus Stamp Journal, the last-minute change of the photographic portrait to be used in the design was made at the request of the family.

Three of the rejected designs using the original photograph are pictured nearby.

Shown first is a cover with an Oct. 7, 1952, cancellation from Maquoketa, Iowa, with a corner illustration of the town’s Decker House, a historical hotel.

The cover is franked with the 1949 6¢ DC-4 Skymaster airmail stamp (Scott C39). Beside the stamp is a label showing Stevenson with the message “I’m for Adlai.”

The other item, also from the 1952 campaign, is an unmailed postcard with the message from a supporter who asked and then answered the question, “Do you know why I’m voting for Adlai E. Stevenson for President of the United States?”

An honorable man, an exceptional orator, and devoted public servant, Stevenson just had the bad luck to be up against a war hero running as a Republican after 16 years of Democrats in the White House.