A scientific approach to the Queen Victoria £5 orange 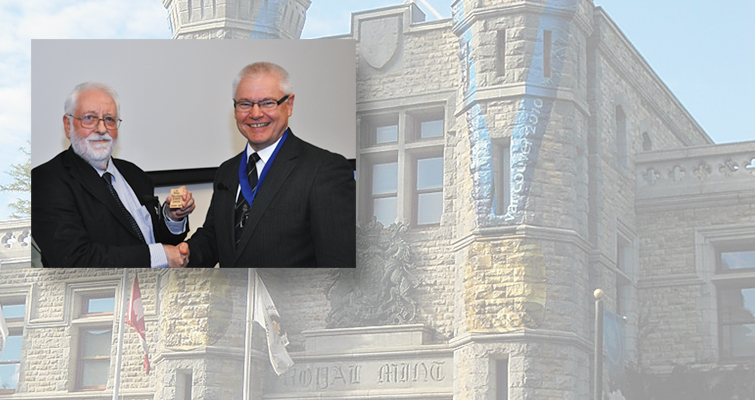 Dr. John Horsey, left, with Frank Walton of the The Royal Philatelic Society London. Horsey recently presented a lecture at the RPSL dealing with the Queen Victoria £5 orange.

1. New approach to a historic stamp

The following is an excerpt from a press release sent by The Royal Philatelic Society London:

“One of the most iconic of British stamps, the Queen Victoria £5 orange, formed the basis of the display and presentation by Dr John Horsey to The Royal Philatelic Society London on 1 October.

“The stamp started life as a receipt for the cost of sending a telegram: many sent overseas cost in excess of £5, and there was insufficient space on the forms for a combination of lower denomination ‘Telegraph’ stamps. The use of such stamps ended on 31 October 1881, after which ‘postage’ stamps were used instead.

“Thus there became a need for a £5 ‘Postage’ stamp, issued on 21 March 1882. The word ‘Telegraph’ was removed from the earlier printing plate, and sheets printed without such inscription. As a separate operation, but in the same colour, a new plate added the word ‘Postage’ to each stamp.

“Dr Horsey’s presentation took a scientific look at the printings of the stamp and the shades and papers involved, plus an analysis of the usage of the stamp. He also demonstrated fraudulent use of the stamp, such as bleaching out an Exchequer cancel to reuse the stamp postally, or carefully applying the postmark over a ‘SPECIMEN’ overprint.”

“A new report from the Government Accountability Office says not only has the United States Postal Service slowed the speed of mail deliveries, it doesn’t provide accurate data on much of the mail it handles.

“That finding, in a report titled ‘Actions Needed to Make Delivery Performance Information More Complete, Useful, and Transparent’ that was published Oct. 5, has troubled some lawmakers who represent rural areas where they say mail service is noticeably slower.”

Have a look at the details of the report.

3. No shortage of holiday and Christmas stamps

“The United States Postal Service is offering more than 20 varieties of holiday and Christmas stamps and postal stationery online and through its recently published USPS USA Philatelic stamp catalog. Many of these stamps are also available from local post offices.”