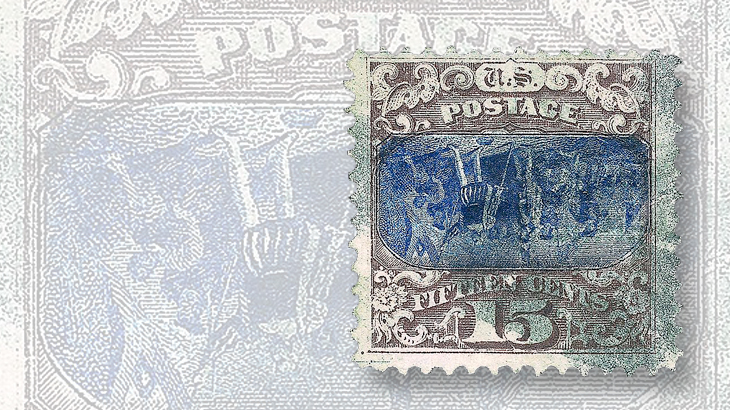 The altered 1869 15¢ Landing of Columbus invert from the Benjamin K. Miller collection, found in 2013.
Previous
Next

Linn’s managing editor Charles Snee reported the recovery of a block of three of the 1845 5¢ New York postmaster’s provisional stamp, once part of a block of 10 that was stolen from the Benjamin K. Miller collection in 1977.

Where have these stamps been since thieves raided the Miller collection at the New York Public Library May 8, 1977, or early the next morning, after hiding out in the library and going unnoticed by security guards in one of the most notable stamp heists in history?

Those two stamps were from the estate of a deceased collector and had been purchased from Pennsylvania stamp dealer Lambert W. Gerber, who died in 1981. Gerber was a source of several stolen stamps from the Miller collection.

Siegel has long been a major auction house for U.S. material, and Siegel’s president Scott Trepel, together with Linn’s Spotlight on Philately columnist Ken Lawrence, wrote the book Rarity Revealed: The Benjamin K. Miller Collection, a catalog for the Smithsonian’s National Postal Museum exhibit of items from the Miller collection.

Trepel routinely checks items that potentially could be from the Miller collection against photographs of the still-missing material shown in the book.

The FBI found the largest number of stamps from the heist in 1980, when the bureau subpoenaed Gerber’s estate and recovered 49 stamps. The FBI recovered 33 stamps from other stamp dealers around the same time.

Is the FBI hot on the case to this day? I have my doubts. It is likely that most of the players in this 38-year-old case are deceased or no longer in business.

It seems more likely that the stolen stamps will come to light in collections and estates when they are offered for sale or consigned for auction.

Let’s hope that all auction houses will be as astute as the Siegel firm in comparing stamps that could be from the Miller collection to existing photographs of the missing items and urging consignors to return the stamps to their proper owner, the New York Public Library.

In the meantime, we will do our due diligence to report the recovery of missing items from the Miller collection.