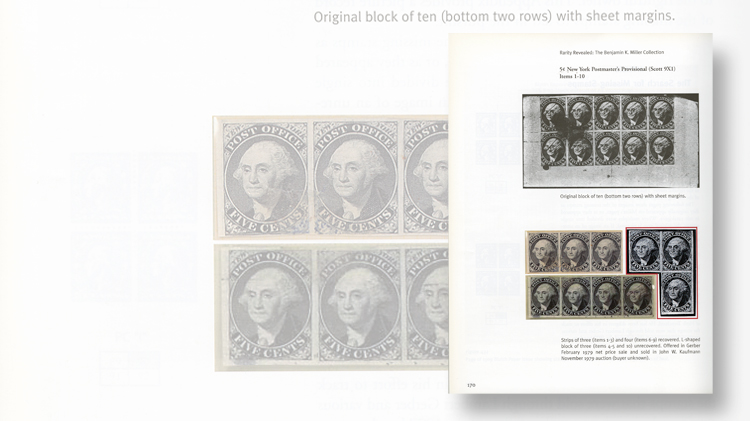 Page 170 from Rarity Revealed: The Benjamin K. Miller Collection. Illustrated at top is the original block of 10 New York postmaster's provisional stamps that was stolen from the collection in 1977. At bottom, outlined in red, is the block of three from t 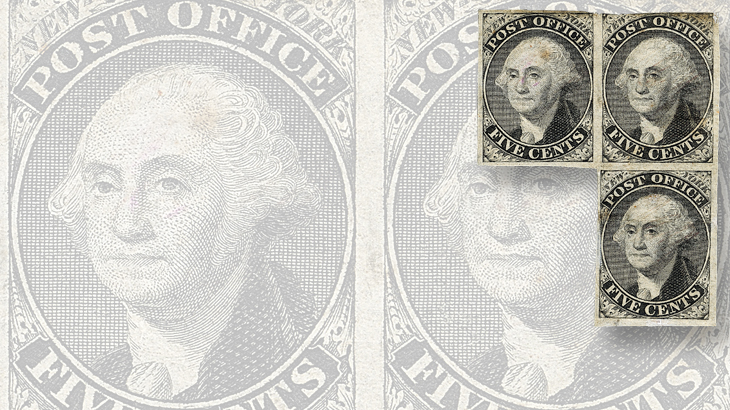 Originally part of a block of 10 that was stolen from the Benjamin K. Miller collection in 1977, this block of three 1845 New York postmaster's provisional stamps (Scott 9X1) was recovered in late September from a collection that had been consigned to Rob
Previous
Next

A block of three of the 1845 5¢ New York postmaster’s provisional, once part of a larger block of 10 that was stolen from the famous Benjamin K. Miller collection in 1977, was recovered in late September.

Corey Long of Robert A. Siegel Auction Galleries alerted Linn’s Sept. 23 that “another major stolen item from the Benjamin K. Miller collection” had been recovered.

Long told Linn’s that the block, shown nearby, will be returned to the New York Public Library, which owns the Miller collection. In 2006, the library loaned the collection to the National Postal Museum in Washington, D.C., for special display.

Rarity Revealed: The Benjamin K. Miller Collection, a catalog for the NPM exhibit written by Siegel president Scott Trepel and Linn’s Spotlight on Philately columnist Ken Lawrence, contains an appendix with descriptions and photos of the unrecovered stamps from the collection.

At the time of its publication in 2006, 72 stamps were still unaccounted for. Since then, according to Trepel, three items (including the New York postmaster's provisional block of three) have been recovered.

Stamps from the Miller collection are now on display in the museum’s William H. Gross Stamp Gallery, which opened Sept. 22, 2013.

The block of three “comes from the unused block of 10 comprising the two bottom rows of the plate that was stolen from the Miller collection and then broken up to hide its identity,” Long said.

“It was found in an old-time collection and consigned to us. We recognized it and informed the consignor who agreed that it should be returned to the NYPL.

“We have not yet contacted [the library] but will do so in the next couple days. This means all the stamps from that block have now been recovered, though of course not in their original condition.”

Linn’s was unable to contact the consignor, who wishes to remain anonymous.

The original block 10 New York postmaster's provisional stamps from which the recovered block of three originated is illustrated at the top of page 170 of Rarity Revealed, shown nearby.

After the theft in 1977, multiples from the collection were divided or otherwise altered to obscure their true origin.

Note that the intact block of 10 had full selvage, which was trimmed away. A large cancellation smear was removed from the left side of the block, as were most of the manuscript initials, “ACM,” of postmaster Alonzo Castle Monson on the face of each stamp.

Evidence of this doctoring may be seen in the composite photo of the three multiples.

With the explosive growth of online resources and the enhanced connectivity that more and more collectors are tapping into, it’s increasingly more likely that other missing items will be recovered and restored to the collection.

In the meantime, Linn’s will stay on the hunt for the other missing pieces of Benjamin Miller’s legacy to the philatelic world.