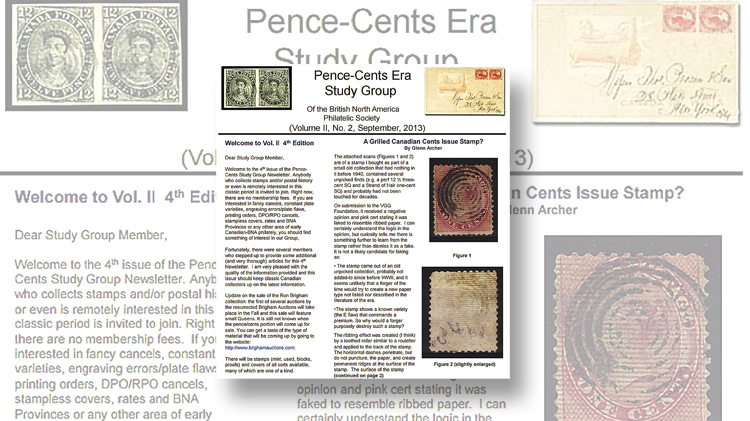 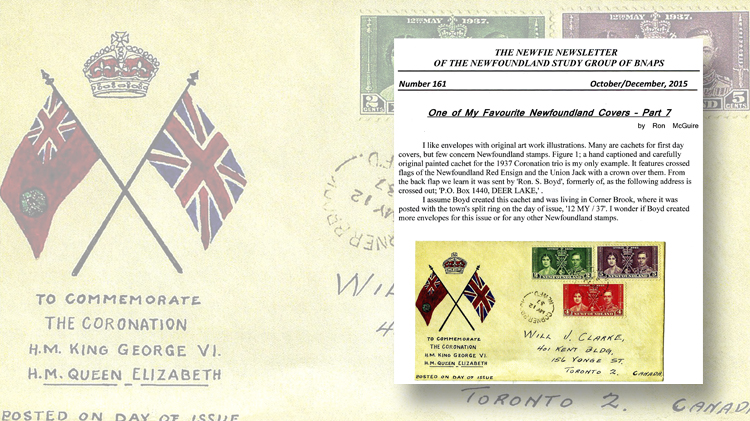 Show-and-tell is a big part of the content and appeal of many BNAPS study group bulletins, such as this handmade 1937 Coronation issue first-day cover from the latest issue of The Newfie Newsletter, journal of the Newfoundland Study Group. 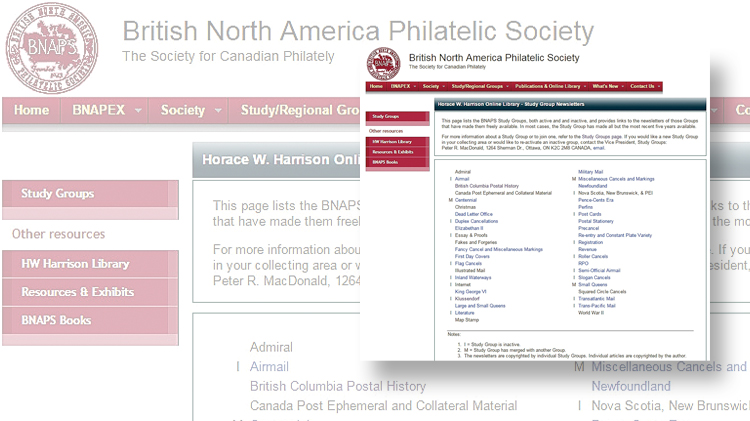 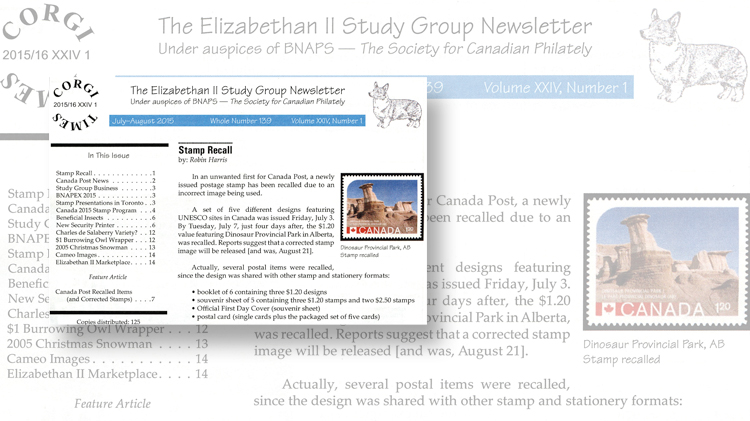 This partial page from the July-August 2015 Corgi Times, BNAPS Elizabethan II Study Group’s newsletter, covers the stamp Canada issued July 3 and recalled July 6 after it was revealed that the stamp depicted a rock formation far from Alberta’s Dinosaur Provincial Park, the site that the stamp was issued to honor. 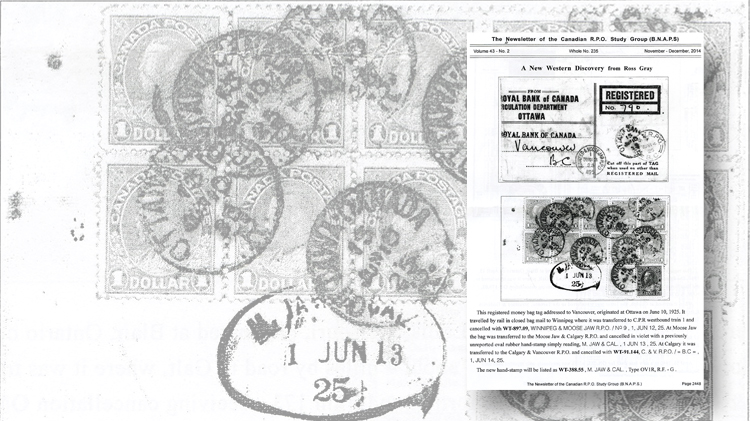 This front page from a 2014 issue of the Newsletter of the Canadian R.P.O. Study Group, which focuses on railway post offices, shows a recently discovered “M. JAW & CAL.” oval datestamp of the railway from Moose Jaw, Saskatchewan, to Calgary, Alberta, used on a registered money-bag tag in 1925. 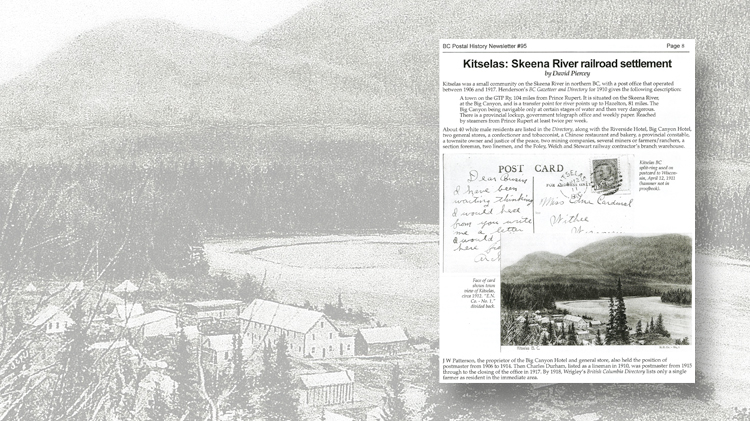 This postcard paints a picture of the Skeena River hamlet of Kitselas, which had a post office from 1906 to 1917 and was featured in this British Columbia Postal History Newsletter.
Previous
Next

In my Aug. 3 Collecting Canada column, I looked at the vast pool of philatelic knowledge and pleasure available to collectors of Canada through the book-publishing program of the British North America Philatelic Society.

In the last dozen years, this society has published 150 titles, most of them in color, almost all of them available to members at an appealing 40 percent discount. I know of no other philatelic society that comes close to that impressive achievement.

Through its Horace W. Harrison Online Library, BNAPS has opened the doors to the vast amount of information contained in 66 years of issues of its journal, BNA Topics, with all but the last five years freely available for any collector for perusal or research.

That’s more than unparalleled generosity — it’s a perceptive investment in 21st-century Canadian philately. It provides anyone who has an interest in stamps or postal history with easy access to understanding and enhanced enjoyment.

Collectors all over North America and worldwide follow Canada stamps and covers. That’s a large audience.

What else does BNAPS offer them? The answer is its subgroups, which cover the continent and Canada philately from the early colonies to the present day.

BNAPS regards its 23 study goups and 14 active regional groups as forming the foundation of its organization.

Not only does the society invite new members to join as many of the study groups as they wish, it goes one step further, offering to pay a new member’s first year dues to one study group and to the member’s chosen regional group.

BNAPS has 10 regional groups in Canada and 35 states. Three of the groups are international: Golden Horseshoe (covering southern Ontario, Ohio and Michigan); Pacific Northwest (from Oregon, Idaho and Washington up through British Columbia to Alaska and Yukon Territory); and Manitoba/Northwest Ontario (including Minnesota, North and South Dakota).

Members of these groups enjoy the travel and camaraderie of shows and get-togethers on both sides of the 49th parallel.

The society’s study groups cover an even wider geographical range, including many participants in the United Kingdom, France and elsewhere abroad.

A chart pictured with this column from BNAPS Horace W. Harrison online library shows all 41 past and present study groups, with the names of those that have journals available on the website shown in blue — all 31 of them.

A partial color page from the most recent issue of The Newfie Newsletter of the Newfoundland Study Group shows content typical of many study group journals: treasured items members share with one another, often enriched with the specialist knowledge of the member, as in the case of this handcrafted first-day cover for the 1937 Coronation issue. And it is just one page from one of the 137 issues of this newsletter from 1985 to 2009 that you can look over for free.

Also pictured is a front page from another study group journal with a deep and rewarding online archive, the Newsletter of the Canadian R.P.O. Study Group.

The group’s specialty is the postal history and development of Canadian railway post offices, and the page shows a recently discovered 1925 “M. JAW & CAL.” oval datestamp of the railway from Moose Jaw, Saskatchewan, to Calgary, Alberta, used on a registered money-bag tag.

New postal history discoveries such as this are a frequent topic in study group publications.

Many BNAPS study groups follow the lead of the larger society and embargo the most recent five years of their journals, which they reserve as a benefit of membership and an enticement to prospective members. One that does not is Corgi Times, named for the Welsh dog favored by the queen, a fitting name for the Elizabethan II Study Group’s newsletter.

This study group posts new issues of its journal shortly after they are published. Pictured here is part of a page from its July-August 2015 issue with detailed coverage of Canada’s recalled $1.20 UNESCO Sites stamp that showed the wrong landmark to salute Alberta’s Dinosaur Provincial Park. That’s pretty commendable for a newsletter with a posted circulation of 125.

Except when it concerns the discovery of a new variety, plate flaw or postmark, most study group newsletters do not cover a great deal of breaking news.

More typical might be the partial page from the September 2013 newsletter of the Pence-Cents Era Study Group shown nearby, examining questions regarding Canada’s earliest issues.

Among the wonderful things collectors can take away from study group publications such as these is a letter-carrier-eye’s perspective on history and geography: an intimate perspective on what it was like to be in one of the many corners of the country that survive for us today on postcards, postage stamps and postmarks.

Page 8 from the September 2015 British Columbia Postal History Newsletter is an exquisite example of this vicarious voyaging made possible by creative postal history.

David Piercey shares a postcard of Kitselas, population 40, a short-lived northern British Columbia hamlet on the Skeena River whose post office operated from 1906 to 1917. (A 1910 provincial directory tersely listed its dubious attributes: “There is a provincial lockup, government telegraph office and weekly paper.”)

There was also a split-ring duplex cancel in use there, which canceled the 1¢ King Edward VII stamp on the card for its trip to the not-much-larger village of Withee, Wis., begging Miss Edna Cardinal for a letter to alleviate the homesickness of a man far from his Badger State home.

What new vistas and fresh discoveries are waiting for you among the journals of the BNAPS study groups? Why not take a look for yourself and find out?