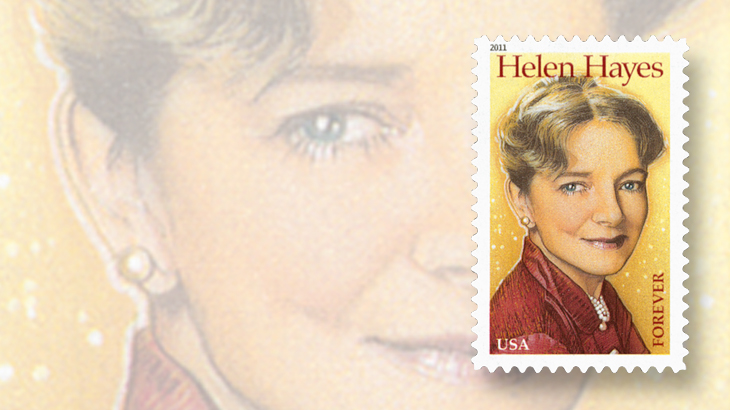 In its tribute to actress Helen Hayes, the United States Postal Service said she justly deserved the title of First Lady of the American Theater for her radiant presence on Broadway for much of the 20th century.

“She also gave memorable and award-winning performances on radio, film, and television,” the USPS announcement added.

Born Helen Hayes Brown on Oct. 10, 1900, in Washington, D.C., Hayes first appeared on stage at age five and made her Broadway debut in a 1909 production of Old Dutch.

She continued to perform on stage for many years, but entered the world of motion pictures while still young. Hayes appeared in The Dancing Town in 1928, a silent short film that was also Humphrey Bogart’s first movie appearance.

That same year she married playwright Charles MacArthur. Their daughter Mary was born in 1930, but died of polio at age 19. An adopted son, James, became an accomplished actor with featured roles on stage and in films, though he was best known as Danny Williams on the original version of television’s Hawaii Five-O crime drama. Hayes was a guest star in a 1975 Hawaii Five-O episode.

During her career, Hayes won two Academy Awards (in 1932 for her role in The Sin of Madelon Claudet and in 1970 for Airport), an Emmy (1953), a Grammy Award (1977) and two Tony Awards (1947 for Happy Birthday and 1958 for Time Remembered). In 1986 she received the Presidential Medal of Freedom from President Ronald Reagan.