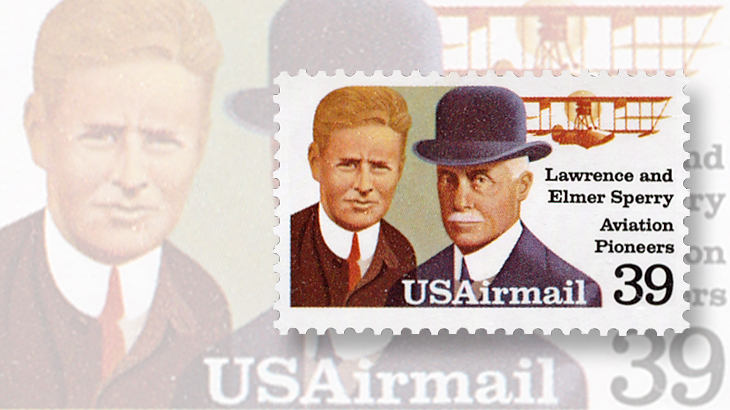 Elmer Ambrose Sperry, who was born Oct. 12, 1860, in Cortland, N.Y., was one of the inventors of the gyrocompass and the airplane autopilot, both essential instruments for successful commercial and military aircraft. He was also a business leader and the founder of Sperry Products Inc., and other companies.

Perry was appropriately honored, alongside his son Lawrence Sperry, on a 39¢ airmail stamp issued Feb. 13, 1985 (Scott C114). Lawrence Sperry invented the autopilot “utilizing the concepts developed by his father for the gyroscope,” according to the Sperry Product Innovation website.

As an inventor and developer, his accomplishments included work with dynamos and arc lamps, designing electrical locomotives, and in 1894, manufacturing electric automobiles.

His development of the gyrocompass in 1908 led to a new Sperry company being opened in Brooklyn, N.Y.

In all, Sperry held more than 400 patents and started several companies during his lifetime. The Sperry Corp., once known as Sperry Rand, was a leader in early computer development and is now part of Unisys Corp.