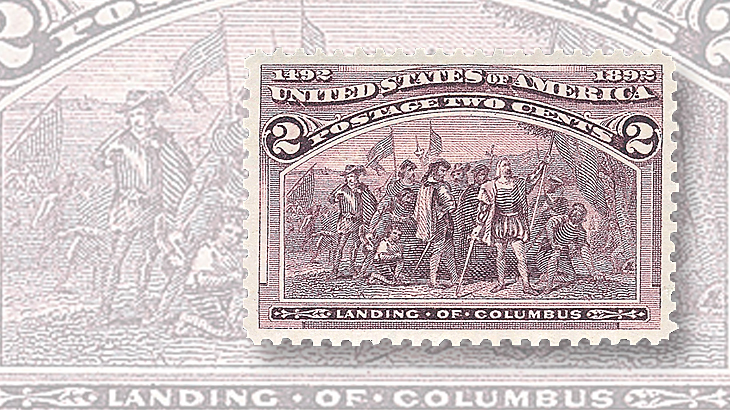 The 1893 2¢ Columbian stamp is one of many that show John Vanderlyn's painting Landing of Columbus.

American painter John Vanderlyn was born Oct. 15, 1775, in Kingston, N.Y., which is situated in the Hudson Valley between Albany to the north and New York City to the south.

Vanderlyn studied at Kingston Academy before moving to New York City, where he studied art with Archibald Robertson. He then traveled to Philadelphia and continued his studies under portrait artist Gilbert Stuart.

With help from Aaron Burr, Vanderlyn studied in Paris for five years, returning briefly in 1801 before leaving for Rome in 1803. After finding success in Italy and France, he returned to the United States in 1815 and painted portraits of prominent men, including George Washington, Andrew Jackson and Zachary Taylor.

Vanderlyn’s portrait of Andrew Jackson in his military uniform was reproduced on the printed liner for the 2015 Battle of New Orleans forever stamp in the War of 1812 series (Scott 4952).